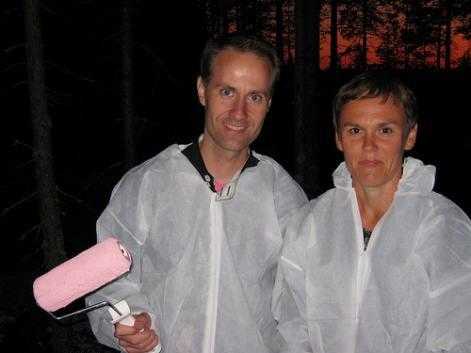 The 16th of May the peace activist Martin Smedjeback will start to serve his two week sentence at the penitentiary Sörbyn, outside of Umeå in the north of Sweden. He was convicted for illegal trespass into the air force base F21 in Luleå in the northern part of Sweden. Inside he and Annika Spalde painted the air strip pink. The action was a part of the international peace camp War starts here organized by the antimilitaristic network Ofog.

The penitentiary Sörbyn has 45 dairy cows which the inmates takes care of. Aside from being active against weapons export and war Smedjeback also works for animal rights. He is a vegan. During the spring he has held a lecture with the title Why we love dogs, eat pigs and wear cows in several cities in Sweden.

– I feel grateful to have been placed at Sörbyn where I can get a glimpse into the life of animals in the meat and dairy industry of Sweden. I look forward to get to know cows more, says Martin Smedjeback, 39, Mjölby, Sweden.

The Swedish Prison and Probation Service has an ongoing research project that investigates whether the animals at Sörbyn and two other prisons will make the inmates more emphatic and lead to less relapses into crime.

– I believe and hope that the closeness to the cows here will increase my compassion, for both animals and humans. This might lead to a relapse into crime because civil disobedience is one of my ways to express empathy for others, says Martin Smedjeback.

Martin Smedjeback can be reach on his cell phone and e-mail before his sentence begins and after he is released on the 29th of May: +46-70-257 90 97, smedjeback@gmail.com

In prison he can be reach through mail to this address:

There is a possibility to visit Smedjeback at the prison the 25th and the 26th of May between 12.30 – 3.30 p.m. Every inmate has to apply for visits and it is not certain that they will be approved. If you would like to visit it is recommended that you send your social security number and address to smedjeback@gmail.com before the prison sentence starts.

About the Swedish prison system: https://www.kriminalvarden.se/en/Other-languages/Prison/A-day-in-prison/

Video from the peace camp War Starts Here where Spalde och Smedjeback did their peace action:

Spalde and Smedjeback at the F21 air base before the action:

All video and pictures from Ofog can be used freely. Please mention Ofog as the source, and Karlberg where noted.

This text was published today at http://ofog.org/nyheter/peace-activist-goes-jail-cows – please share freely and correct any grammatical or other mistakes.