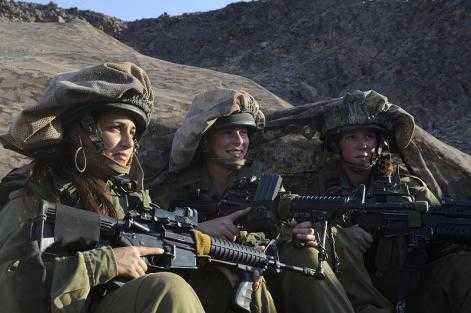 Israel has had, since its creation, mandatory military service for both men and women. It prides itself, both internally and externally, on its relatively gender-equal military in which women can both contribute to their society just as men can, and get an opportunity to prove their worth. The apparent gender equality presented by the military provokes a particular feminist perspective on the conscription of women.

When I was about eleven my brother had a poster in his room of a female combat soldier in training, carrying a male soldier on her back, simulating an evacuation of an injured comrade in battle. At the time I made up my mind that I wanted to be a combat soldier; I wanted to prove to the men, but maybe more so to myself, that I could do the same things as them. More or less at the same age I also knew that I was against the Israeli military occupation of the Palestinians - that violence was not something that I would like to promote in any way. But the appeal of having an opportunity to really prove myself as equal to men in this very male-dominated field was stronger. With time, I grew out of this, as my understanding of feminism and equality developed, but there are still times when on an emotional level I get the same feelings, and sense the same admiration towards those women combat soldiers 'taking on' the men.

Historically, the heroisation of combatants has usually overlooked women. While feminist and anti-militarism movements tried to challenge the concept of heroisation, it seems the Israeli military has tried to promote participation of women in combat, at least for appearances. The conscription of women to the Israeli military is not only another part of universal conscription in Israel - and of the sentiment that 'everyone goes' - but is also specifically highlighted as a policy based on, and promoting, gender-equality. The Military, made of 34% women, prides itself on 88% of position in the army being open for women, and women’s participation in combat.
This illusion of equality has two purposes. The first is to motivate young women to serve, showing them that the military is a place for them to prove that they can be equal to men in their duties and performance. The fact that hundreds of soldiers complain about sexual harassment in the military every year, and, according to military research in 2002, 80% of female soldiers were sexually harassed during their service, is usually overlooked.

The second purpose of this illusion of equality is part of the legitimisation of the military, both for itself and for the rest of Israeli society and the international community. The Israeli military prides itself on being 'the most moral military in the world'2. This phrase is especially used to legitimise the IDF during combat, saying that because Israeli soldiers act in the most moral way possible considering the circumstances, civilian casualties, injuries and damage to property during 'military operations', must be justifiable. After the attack on Gaza in 2009 (Operation Cast Lead) the Israeli minister of defense Ehud Barak responded to testimonies by soldiers regarding the harm caused to civilians by asserting: 'We have the most moral military in the world. I spent tens of years in uniform, I know what happened in Yugoslavia, in Afghanistan and in Iraq, and I tell you that from the chief of staff until the last soldier, the most moral military in the world stands at the disposal of the Israeli government. I have no doubt every specific incident will be looked into'.

To maintain this perception, the IDF must appear to have a higher moral standard than that of the people it fights against, not only on the front line but also at the level of its core values. For this reason, the conscription of women and the illusion of equality for women inside the military system, together with the conscription of homosexuals, give the IDF the moral highground - when it comes to 'Western' values – compared to any other military in the world, and especially in the Middle East. And so the Israeli military and Israeli society can celebrate the compulsory conscription of woman as a progressive next step for women's liberation.

The other side of this, is that the women’s peace movement in Israel has been, for decades, a dominant voice in the general peace movement, and has managed to use their unique voice as women to influence policies. Interestingly, at times this was also done by using the role a militaristic society allowed women to dominate – the role of a caring mother of a soldier – to demand the end of war and the return of the soldiers back home, a strategy that was effective with the movement Four Mothers3 that was instrumental in the final retreat of Israeli from Lebanon in 2000. Other feminist peace movements took a different path questioning the role given to them as supporters and educators of future soldiers, and formed group like Women in Black, New Profile, the Women’s coalition for peace and many more, all trying to raise a clear, ongoing, feminist voice against the occupation and militarization of Israeli society.

In 2005 Idan Halili, a 19 year old Israeli young women declared her refusal to serve in the military saying: "A strongly patriarchal institution, like the army, underlines female marginality and the superiority of male-identified values. ... It might be said that a mood of sexual harassment is endemic to the army. And so the demand that a woman enlist is tantamount to demanding that she cope with sexual harassment. I as a feminist, feel I must avoid military service and act to limit and reduce the influence of the army on civic society.”.

Today, we as members of Israeli feminist movements working towards the demilitarization of Israeli society, must constantly provide a feminist alternative voice, both underlining the inherent patriarchy in the military and its effect on women, as well as presenting our alternative – a feminist voice for peace.

Based on her article in the upcoming WRI book provisionally-entitled 'Sowing the Seeds: The Militarisation of Youth and How to Counter It'