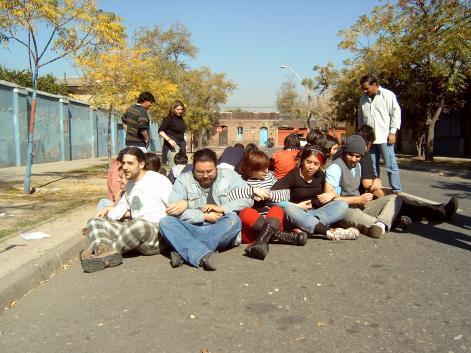 Is strategy a buzzword within nonviolent social movements? I ask myself this question since at social movements meetings I repeatedly hear: “We need to be strategic” or “Why are people not interested in strategy?” In changing a certain problem, is having a clear strategy the key factor in what movements can achieve? If so, then what that makes a good strategy? And what helps groups develop such strategies? These are some questions we have been asking ourselves for many years at War Resisters' International.

First, what do we mean by strategy? People see strategy in many different ways. Firstly, there is a distinction between strategy and tactics. WRI's Handbook for Nonviolent Campaigns says: “tactics are the actual means used to gain an objective, while strategy is the overall campaign plan, which may involve complex operational patterns, activity, and decision-making that lead to tactical execution. Strategy is a long-term plan of action designed to achieve a particular goal. Strategy is differentiated from a tactic or immediate actions with resources at hand because it is extensively premeditated and often practically rehearsed. Strategies are used to make the problem or problems easier to understand and solve”. This is a linear approach where the key word is planning: you plan each step.

Marshall Ganz suggests a less linear approach, arguing “Strategy is how we turn what we have into what we need to get what we want. It is how we transform our resources into the power to achieve our purposes. It is the conceptual link we make between the targeting, timing, and tactics with which we mobilise and deploy resources and the outcomes we hope to achieve”.

There are many definitions of strategy and they work differently for different purposes. Often the starting point for a strategy is to look at what we can do to bring about change, which is connected to our motivations and what is possible. This will define several aspects of your strategy: what your goals are, what your message is, who you target, what tactics you implement, etc. Making it into a plan might increase effectiveness, but campaigns need to be flexible: creating newsworthy actions to attract interest from other people, and perhaps to wrong-foot opponents.

Much has been written about what drives change in certain circumstances: do structural conditions means that change would happen anyway, or is the strategy of the movement the main force behind the change?. In their book “Why Civil Resistance Works” Erica Chenoweth and Maria J. Stephan say that “voluntaristic features of campaigns, notably those related to the skill of the resistors, are often better predictors of success than structural determinants”. They argue that nonviolent movements have been effective in a wide range of contexts - from the most repressive to most open societies - so change depends primarily on the strength of the movement. This echoes Marshall Ganz who claims that “although learning about how the environment influences actors is important, learning more about how actors influence the environment is the first step not only to understand the world but to change it”. This means that strategy doesn't work in isolation. A clear understanding of your environment is key to determining your strategy. A crucial element is having the capacity to identify openings or cracks in the system, and having the right strategy exploit these opportunities – some times strategies also create this opening. A good strategy on its own is not enough, you need people to implement such strategy.

Chenoweth and Stephan in “Why Civil Resistance Works” - which argues that in the last century nonviolent movements have been more successful than violent ones - say that the key for this success has been the capacity for nonviolent movements to become mass movements, as the level of risk, skills etc, are much lower than in violent movements. One argument about nonviolent action is that everyone can join in! Does one of the strategic goal need to be building a mass movement? Can change happen without large mobilisations? What role groups such War Resisters' International, which usually doesn't mobilise huge masses of people, play to bring about change?

One of the best known social movement models, Bill Moyer's Movement Action Plan (MAP), argues that for a movement to be successful there are four roles that groups or individual need to play - we can not all be or do the same. These four roles are the rebel, reformers, citizens, and the change agent. MAP suggests that most social movements go through eight different stages: business as usual, failure of established channels, ripening conditions, take off, perception of failure, winning over the majority, success, consolidation of success, and moving over to other struggles. Different groups and people can play bigger roles in particular moments. For example, in WRI different groups play different roles: many see themselves as the rebel, regarding nonviolent actions as a way to draw attention to a problem. At the same time, WRI often does the silent work of supporting each other, in particular when things seem quiet - actually a lot of ground work is being done. For example: providing training to grassroot groups, helping them to work together, and planning a campaign or preparing for action. Often, these groups are the initiators of what later might become mass movements. At WRI we do what we do, first and foremost because is what we believe in, but also because of our profound conviction in revolutionary nonviolence. For WRI, our principles are key to our strategy.

In recent years the Nonviolence Programme of WRI has created resources and lead nonviolence trainings to help people in their nonviolent campaigns, empowering them to take action. We believe that training and planning aids strategy. Sometimes the outcomes of a training are not clear immediately, but it often empowers groups, and when the time is ripe they have the skills to come up with good strategies.

In 2012 WRI helped organise two regional training exchanges. Sharing experiences can motivate you to take action, not to copy what others have done but to inspire you to think outside of the box.

The first exchange was in South Africa, and had a focus on nonviolence struggles. At this exchange the main need from participants was to share their experiences of struggle, to learn how people in different parts of Africa have used nonviolence as their means of struggle. The key was to visualise this share identity, showing how our identity is fundamental when thinking of developing strategies.

The second took place in Belgium, bringing together nearly 40 trainers from around Europe. We explored how as trainers we can facilitate groups working on strategy, or even just getting people to start thinking about strategy. There were sessions looking at social movement and strategy theory and the current situation of movements in Europe, but clearly the biggest interest in the group was looking at how training can facilitate group process, as this is a key component for developing good strategies. For example, in one meeting someone said that they often get requests for campaign development training - to help a group move forward - but that as trainers they realise that the problem is not related to campaigning, but about group dynamics: the group is not working well together. At times, it felt that the message was that a healthy group is as good as a strategically-minded one; but is that enough? There is no question that a starting point for any work for social change is that a group works well together. Then the question is: is the main contribution that a training can give to a group to help them work better together? This could be seen as one, or the main, contribution of training, because if a group can work well together, they are more likely to come up with a shared analysis of the situation - an understanding of the context and a vision of what they want to change. They may also set long and short term goals, alongside a plan of how to reach them whilst maintaining enough flexibility to change the plan according to the conditions faced. There are training tools that help you in each of these steps, and trainers can share and facilitate them, but it is better if they come from the group.

There is no magic answer to what enables a group to strategically bring about change. Different groups work differently and contexts vary. As trainers, we know that one tool that works well with one group might not work at all in another - one effective tactic in one stetting can be counterproductive in another. If there is one thing I have learned, it is that learning from each other, by sharing our experiences can be immensely inspiring and can also lead to action. At WRI we will continue bringing people together to get inspired and support each other, knowing that we can not replace the work of the group itself, but may help to bring closer together our paths for change.