Mexico – so far from peace, so close to the United States 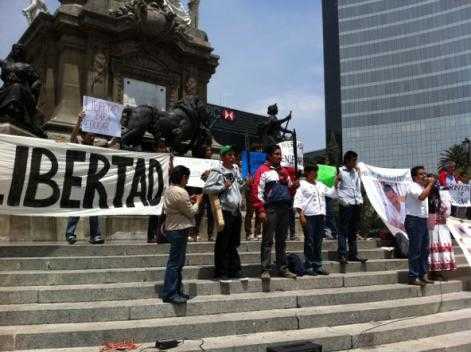 The 'War against Drugs' erupted in Mexico at the end of 2006 when Felipe Calderón, just 10 days into his presidency, launched the joint operation 'Michoacán' to fight organised crime. It has resulted in at least 60,000 deaths from executions, confrontations between gangs of narcotrafficers and battles with federal forces.

Assassinations and forced disappearances continue with the new President Enrique Peña Nieto. In his first 6 months, the death toll adds up to 6,250 - about 1,000 deaths per month3.
Investigating these crimes has a very high cost. Mexico is the fifth most dangerous country for journalists in the world, and according to a United Nations report on the freedom of expression, the most dangerous in all of the Americas. In the first six years of the 'War against Drugs' 56 journalists were murdered and 16 disappeared. Others have been displaced or forced into exile under threat of death.

The economic cost of the war

In addition to the death toll, the war also brought an increase in spending on public security. Among the first decisions of Enrique Peña Nieto was to increase the Secretariat of National Defense's budget by US$500 million for the purchase of arms and 'improving operational schemes in the integrated combat against drug trafficking' and 'to make the activities aimed at eradicating, intercepting and fighting organised crime more efficient'.4

The objectives of FASP are the 'recruitment, training, selection, evaluation and filtration of human resources involved in the tasks of public security' and the equipping federal and state police forces, establishment and operation of a national telecommunications and information network for public security, etc.5 The opacity of the execution of this fund has been criticised by non-governmental organisations who indicate that the lack of transparency will increase the mistrust of public security forces. In 2010, according to Latinobarómetro, eight out of ten Mexicans distrust the police.6 The perception of corruption amongst the police is confirmed day after day in the news.

If the level of distrust is very high in the capital, in the rural areas it tends towards complete mistrust. Several cases of organised crime having infiltrated the public security structures have been proven. As a result, in states with high instances of organised crime activity like Michoacán and Guerrero, community police groups have sprung up under the banner of 'self-defence', which has alarmed the government and the public in general because of the similarities with armed self-defence forces in Colombia.

The feeling of abandonment by or inefficacy of the security forces has brought about the creation of the community police in Guerrero at the start of 2013. In July 'drug traffickers' compelled more than 1,000 people to abandoned their homes in three communities. Three days of gunshots, the murder of the local Public Security sub-director, kidnappings and property destruction provoked the exodus of the local population who decided not to cooperate with the drug traffickers' demands for freedom of movement in their area.

In April 2013, the governor, Ángel Aguirre and self-defence leaders signed a pact looking for some way to legalise the community police and define the type of weapons they could carry. This did not please the federal government, who want to have a monopoly on the use of armed force, especially high calibre weaponry.

On the 5th of August in Costa Chica in Guerrero state, the army disarmed and detained 2 members of the self-defence forces for carrying high calibre weapons. Later a military convoy with 100 soldiers was taken hostage for more than 24 hours while the self-defence forces demanded the release of their two colleagues and accused the army captain of links to organised crime.
In the state of Michoacán, the self-defence forces have come about in a different environment. After constant confrontations between two gangs, 'vigilantes' have emerged, who are accused of cooperating with Jalisco's New Generation cartel.

After 34 members of the self-defence forces in the municipality of Buenavista Tomotlan were detained, the community accused the police of acting on the side of the 'Caballeros Templarios Michoacanos' (Michoacan Knights Templar), the dominant cartel in the region. Michoacán is the hottest zone in the country, especially since 28 July 2013 when a Marine admiral and his bodyguard were killed in an ambush.7

In addition to Mexicans themselves, people who pass through the country are also victims of the armed conflict. The majority of migrants are Central Americans who flee economic desperation or threats from the maras, gangs linked to the Zetas. Between 2006 and 2012 more than a million undocumented migrants entered Mexico through the southern border, with the majority intending to arrive at the northern border, where the coyotes await, charging 10,000 Mexican pesos (about US$900) to take them to the other side of the border. From their countries of origin it can cost up to US$3000.

A large proportion of the undocumented immigrants, lacking legal protections, are easy prisoners for the cartels that control vast territories and migration routes in Mexico. The families of kidnapped migrants face extortion, and even though in many cases they do pay for their family member's freedom, often they never hear from the person again. According to the Mexican congressional Chamber of Deputies, some 6000 migrants disappear each year while crossing Mexico en route to the United States.8 One especially horrific case was the discovery of 72 murdered migrants on a ranch in Tamaulipas in August 2010, after an armed confrontation between the Mexican Navy and organised crime groups.

Many kidnapped migrants end up being mules: couriers for transporting drugs into US territory. The US border patrols detain about 400,000 people each year. Many people die along the way after 3 or 4 days walking through the desert in Arizona or New Mexico. According to the Washington Office on Latin America, 463 migrants died just in the period from September 2011 to September 2012.9

'The most militarised border in the world' or the border with the largest flow of arms?

The US response has been the creation of a border wall which will be more than 1100 Km long and will separate Mexico from the United States. According to former US presidential candidate John McCain, it will be longer than the Berlin Wall and will become the most militarised border in the world.10 Many experts on both sides of the border believe that the wall will not resolve the immigration problem. In addition, ecologists warn that it will also obstruct animal migration since it will divide their natural habitat in half. The exact cost of building the wall is not known, but there will be US$13 billion dedicated exclusively to 'improving the southern border strategy', and in addition to the current 21,000 border agents there will be another 19,000 added.

While drugs and migrants head north, arms cross from the US to the south. The Ex-president of Mexico, Felipe Calderón, urged the US to stop the flow of arms and money to criminal groups, noting that of 100,000 arms seized during his presidency, 90% came from the US side of the border. But according to WikiLeaks, the US government insists that 'the most powerful and lethal weapons illegally purchased by Mexican organised criminals, which include high-calibre military-type arms, don't enter via the border that divides the two countries but rather originate in the arsenals of Central American military forces and are smuggled in through the southern border via crossings that are badly protected and poorly guarded by the local and federal Mexican authorities.'11

Nonetheless, the Mexican cities that border the United States are the most violent, with the highest number of homicides. In 2011 there were 2086 murders in Ciudad Juárez alone, and although in 2012 the number decreased to 750, it was still the highest in the country.

Mexico: Beautiful and armed to the teeth

In Mexico, the presence of people with weapons is normal. The military cruise main avenues in their trucks - even in tourist areas. Local police patrol the street with shotguns, and federal police with high-caliber weapons patrol in the back of their pick-up trucks. The innumerable members of private security companies can literally be seen on every corner guarding banks and even shops. In contrast with the police, the population has a lot of confidence in the Navy (79%) and the Army (75%).12

Some civil society organisations demand that strict controls be placed on firearms.13 Amongst them is the Movement for Peace with Justice and Dignity, led by the Mexican poet Javier Sicilia who, after his son was murdered by members of organised crime, called for Mexican society to protest against the violence perpetrated by these groups, but also against the violence carried out by police and law enforcement agencies. In 2012, Sicilia organised a tour called the 'Caravan for Peace with Justice and Dignity' through 25 US cities, in order to tell people in the US about the consequences of the 'war on drugs' for people in Mexico and the humanitarian catastrophe that it has created. The caravan concluded in in Washington, DC, which Sicilia saw as 'an end point but also a beginning'.

Mexican artist Pedro Reyes, for his part, organised actions for converting decommissioned arms into things that would serve the community. One of the projects was 'stakes for pistols', which transformed 1527 guns into 1527 stakes for the planting of 1527 trees.14 Later, the artist organised two more actions named 'Imagine' and 'Disarm' in which the decommissioned arms were converted into musical instruments.

Family members of people who have disappeared organise protests and marches through the main avenues of Mexico City, and frequently organise occupying encampments in front of federal institutions that they consider responsible for not providing security to citizens, demanding urgent actions to find their family members who have been forcibly disappeared.

However, many alternative social movements view self-organised armed groups with sympathy, especially those linked to indigenous communities. There is the feeling that anti-militarism and pacifism, in their most orthodox forms, don't find fertile ground in Mexico. But it ultimately depends on us and whether or not we try to make possible what currently seems impossible.