The Insumisión movement against military service in Spain: legitimate disobedience

Carlos Pérez Barranco In December 2001, the last recruits abandoned military barracks across Spain after having completed the final nine months of obligatory military service. In many European states, the end of forced recruitment had been motivated almost exclusively by the military forces' evolution towards global intervention operations, whilst in Spain the system of forced recruitment had collapsed despite years of government efforts. 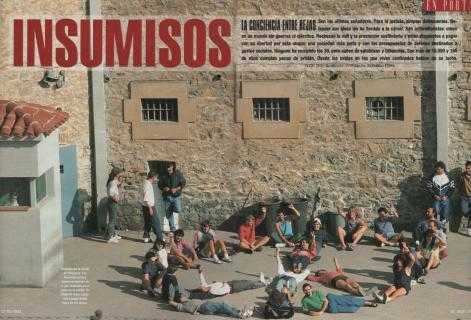 The end of military service was a social victory in Spain. Even though the political elites and military tried to wrap the end of conscription in a discourse about the 'modernisation' of the army, the facts show that the key factor that really provoked the end of compulsory military service was three decades of continuous action by a broad social movement, which used civil disobedience against conscription as one of its fundamental signs of identity. In the decade running up to the change in 2001, obligatory military service became completely socially discredited, and the majority of Spanish society saw it as a useless and harmful institution. This was impossible to imagine in the 1970s, when the movement had just begun to organise itself, and there was an increase in the number of cases of public disobedience to recruitment for pacifist and anti-militarist reasons. At that time it was also hard to imagine that by the second half of the 1990s the number of applications for substitute service would greatly exceed the number of recruits, reaching a backlog of up to a million applications that were impossible to absorb into the alternative service system. Those who resisted military service as well as alternative service, the insumisos, could be counted by the thousands.

First steps: From the Jehovah's Witnesses to anti-militarist objectors

During Franco's military dictatorship, many Jehovah's Witnesses refused to perform military service because of their religious beliefs, and suffered long prison sentences without regarding their refusal as a tool for social change. This sort of limited 'conscientious objection', which did not question or threaten military structures (which at that time were also the structures of the state itself), was later used as the model for legislation that would provide for conscientious objection, despite the fact that at the beginning of the 1970s already had a clear public, anti-militarist, conscientious and self-organised form. In the last years in the life of the dictator and the regime, the first civil objectors to military service organised support campaigns, publicly refuse recruitment, harnessed the media, always appealing to the public with pacifist and anti-militarist arguments justifying their disobedience. The first groups of conscientious objectors formed and worked in particularly impoverished neighbourhoods instead of doing military service, in order to make their social alternative easily understandable. They demanded and created a sort of alternative, self-organised civilian service outside of the state conscription mechanisms. With the refusal of these objectors to accept the first legislation regarding conscientious objection for religious reasons, the Conscientious Objectors Movement (MOC) was founded, giving a name to an existing network of groups that had been the main driver of disobedience over the last 30 years. During the 1970s more objectors were sent to military prison, but, as would be confirmed in later years, this repression would not break up the movement. On the contrary, it would make it grow and increase its public influence.

From objectors to insubordinates: los insumisos

In 1980 the Minister of Defence issued an internal order that momentarily halted the imprisonment of objectors. Whilst waiting for a new law to be written and enforced that would regulate conscientious objection, and institutionalise an alternative service, conscientious objectors were being sent directly to the 'reserves'. In practice this meant that there was a secret amnesty - a treaty that the movement used to strengthen itself and prepare new strategies for disobeying this new law. The new conscientious objection law, designed to tame the objection to conscription movement, confine it to small numbers of people, and thus save military recruitment, finally arrived in 1986 after a long, problematic legislative process (including a claim of unconstitutionality brought to the Constitutional Court). The alternative service system was not set up until 1989. At that time, the civil disobedience movement was less of an 'objectors' group' than it had been in the 1970s, as it had regenerated and evolved, and its anti-militarist discourse had become deeper and more radical. Civil disobedience and nonviolence were now tools for not only ending military service, but also for dismantling the army and military system, and radically transforming society to confront militarism in its different social manifestations. First MOC, and then other networks like the Coordinadora Mili-KK, announced that they would refuse the alternative service that was established by the Law on Conscientious Objection. On 20 February 1989 the first fifty insumisos publicly appeared at the entrances of the various Military Governments in different Spanish cities, giving rise to a new phase of civil disobedience known as insumisión.

Insumisión began as a campaign developed by these networks and followed by hundreds of objectors, but with the passing of time, the intense debate that it caused, the support of ever wider and varied social groups and the 'boomerang effect' from the repressive imprisonment of the insumisos (the sentences were for 2 years, 4 months and a day in prison) caused the figures to continue to rise during the early 1990s. The movement was able to resist imprisonment thanks to the generation of a broad network of groups supporting the insumisos, and through 'training' objectors before prison. 'Self-incriminations' also played a very important role in cushioning the repression against insumisos, and in creating support networks and solidarity. For every insumiso tried, four people signed and presented declarations to the same court charging themselves for having led and aided the insumiso in their disobedience. According to Spanish law this crime should also be prosecuted and receive a sentence equivalent to that given to the insumiso. Despite this, no self-incriminated person was ever prosecuted. Given the evidence that prison was increasing the breadth and impact of solidarity with the imprisoned objectors, the socialist party government of the time decided to first assign all imprisoned insumisos to open prisons (something that a very disobedient part of the moment fought, refusing to return to prison and obliging the prison authorities to send them back to closed, standard regimen prisons). Later, in 1995, the government replaced prison sentences with 'disqualification' or 'civil death'. From this point on, insumision was so widespread that it became 'normal', and the majority of the thousands of young people who refused to be recruited did so by themselves, without any coordination with the movement.

At the same time, alternative service was seen by more and more young people as something 'easy' and not particularly 'radical' compared to insumisión. Hundreds of thousands of people requested alternative service in place of military service and this collapsed the system. Having been conceived as a minority option, it could not cope with the large number of participants. In addition, the movement was able to get many NGOs and associations to refuse to offer alternative service posts, which was in practice a boycott of the alternative service programme. This finally strangled it. The majority of young people opted for alternative service but never carried it out because of lack of posts. This caused the complete collapse of the whole military and civilian recruitment system. Thus, in 1996, the government announced that military service would come to an end in 2003 (this changed to 2001), and instead they would form an army of professional soldiers. This announcement accelerated the collapse still further, and also caused the disbandment of a large part of the disobedience movement against obligatory military service, since they felt that the principle objective had been achieved.

'Insumisión in the barracks' and the end of military service

Despite this, the movement organised and carried out new forms of disobedience to recruitment, such as the so-called 'insumisión in the barracks', in which this author participated in from 1997. Dozens of MOC antimilitarists continue this work, declaring ourselves to be objectors after being incorporated into military ranks. In this way the movement seeks to deepen the recruitment crisis and return the debate to within the ranks of the military, which recently has transformed itself into a force for global intervention. 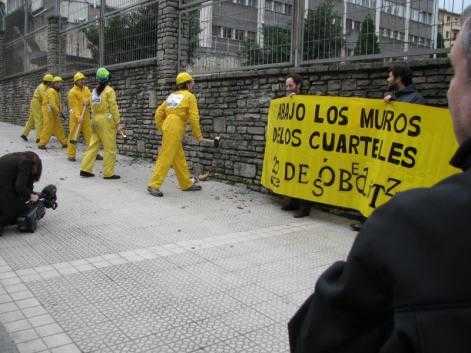 Simultaneously, we interfere in the military's public professional recruitment campaigns. The 'insumisión in the barracks' was a transition campaign towards this new landscape, in which the antimilitarist movement no longer had military service or conscientious objection. This campaign developed while the MOC sank into debates, without having defined the lines of action that it would pursue a few years later, focusing on criticism of the military industry and expenditure, counter-recruitment and campaigns for the closure of military bases, amongst other themes. In any case, first the conscientious objection moment and then the wider and more varied insumisión movement are prime examples of civil disobedience movements, because of their widespread social impact and goals. Though you have to recognise that the military institutions had a very bad social reputation for having supported Franco's dictatorship, and that a certain anti-repressive culture was widespread in Spanish society anyway, insumisión demonstrated that civil disobedience has immense power for social transformation. We have attempted to record this story in a book edited in 2001, “En legítima desobediencia” (In Legitimate Disobedience), produced by the MOC, with texts contributed by people and groups who participated in the conscientious objectors' movement in its different phases. This had a clear purpose: to provide inspiration and experience to the disobedience campaigns of years to come, struggles which are already with us in new and surprising ways. Translation: Ian MacDonald