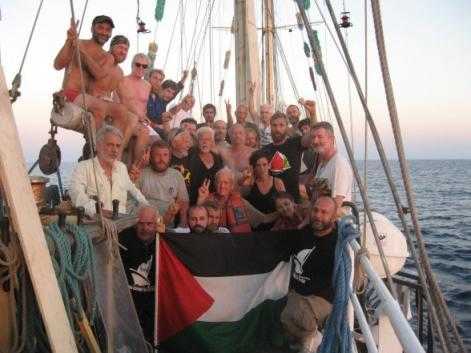 In 2010, a convoy of six ships called the Freedom Flotilla set out to challenge the blockade of Gaza, posing a considerable dilemma for the Israeli authorities. On board the ships were around 700 unarmed civilians from around the world, including some well known personalities, like the Swedish crime novelist Henning Mankell and parliamentarians from a number of countries. In addition to the passengers and representatives from the media, the ships also carried 10,000 tons of humanitarian aid, such as building materials and medical equipment like X-ray machines and ultrasound scanners.i The long journey meant that the pressure built while the ships approached Gaza, making this a drama for the world to watch.

The Freedom Flotilla is a good example of a dilemma action, a type of nonviolent direct action that forces the opponents to make a choice between responses that are equally bad from their point of view.

US nonviolent activist George Lakey in his book Powerful Peacemaking was the first to write about what he called “dilemma demonstrations.”ii He presented the dilemma as between two options for authorities: either let protesters continue with their demonstration, which would achieve an immediate goal, or use force to stop them, thereby revealing their harsh side and generating popular concern.

Brian Martin and I decided to approach the issue of dilemma actions systematically in a small research project. We looked at a number of cases, including the freedom flotilla, in order to identify the core characteristics of a dilemma action. We found that the essential feature of a dilemma action is that the opponent has no obvious best response. The most attractive responses have mixes of advantages and disadvantages that are not directly comparable, as assessed at the time or in hindsight. Many nonviolent actions are reactions to what authorities or multinational companies do: activists respond to agendas set by others. In dilemma actions, activists are proactive.

Most nonviolent actions never impose a dilemma. Take a conventional expression of social concern, such as an antiwar rally on Hiroshima Day in a liberal democracy: authorities may tolerate or even facilitate the event because it poses little threat to vested interests, whereas banning it would arouse antagonism. Some forms of civil disobedience, such as ploughshares actions involving damaging military equipment, also pose no dilemma, because authorities know exactly what to do: arrest the activists, who willingly surrender to police. Nevertheless, we think it is more useful to think of dilemma actions as a matter of degree rather than dichotomously present or absent.

The dilemma the activists from the Freedom Flotilla created at first sight has two “solutions”: either let the ships arrive in Gaza with their passengers and cargo, which in the eyes of many Israeli citizens would mean giving in to pressure. The other option was to stop the vessels, and in that case the next dilemma arose: what means should be used, and when? In the end, commando soldiers from the Israeli Defense Force attacked early in the morning on 31 May 2010, while the ships were still in international waters. On board the Mavi Marmara, nine Turkish citizens were killed, some of them shot dead at close range.iii The killings created an enormous public relations disaster for the Israeli government, and were condemned around the world. The use of force backfired on the Israeli government despite its efforts to inhibit public outrage.iv Many governments summoned the Israeli ambassadors or recalled their own.v The relationship with the Turkish government, for decades one of the Israeli government’s few allies in the Middle East, was damaged for more than a year. Although the Obama administration in the United States was very restrained in its reactions, it expressed criticism of the Israeli government. A UN commission was established to investigate the attacks, and in August 2011 reached the controversial conclusion that the blockade of Gaza was not illegal, but that the use of force had been excessive and unreasonable.vi

Dilemma actions provide one approach for increasing the effectiveness of nonviolent-action strategies. Knowing more about the dynamics of dilemma actions can enable activists to design their actions to pose difficult dilemmas to opponents, leading opponents to make inferior decisions or waste their efforts preparing for several possible responses.

Within the freedom flotilla movement there has been discussion about how to make the dilemma from 2010 even more difficult. The following year, the campaign planned to repeat the journey, and 12 ships were ready to travel towards Gaza, 10 of them from Greek waters.vii More ships with passengers from even more countries were chosen as a means for raising the pressure.

However, the Israeli government avoided a repeat of the 2010 scenario by using more subtle ways of stopping the ships. They cultivated relationships with the Greek government, and launched a successful diplomatic offensive which resulted in UN General Secretary Ban Ki-moon calling on all governments to urge their citizens not to participate in a second flotilla.viii The Greek authorities banned the ships from leaving their ports; those that attempted to leave anyway were intercepted by the Greek coast guard.ix Two of the ships had similar propeller damage, leading to suspicion that they had been sabotaged by the Israeli secret service.x The Turkish authorities also prevented the Mavi Mamara from leaving Turkey—in spite of the Turkish government’s criticism of the blockade of Gaza. Only one ship, leaving from France, was boarded by Israeli commando soldiers and no one was killed.xi These events prevented a potential public relations disaster for the Israeli government. The Israeli authorities, by proactive lobbying, dealt with the potential dilemma before it landed on their doorstep. They managed to make it an issue about permissions to leave ports. Bureaucratic obstacles are far less newsworthy than a military attack in international waters.

The 2011 attempt to break the blockade clearly shows how difficult it is to foresee what an opponent facing a dilemma will do when actions and reactions are not routine. The activists had prepared for many different Israeli government reactions, but not foreseen the possibility of bureaucratic obstacles of this kind. One way to surmount such obstacles would have been for the ships to start from different ports in different countries. However, this would have increased the organizational challenge of arriving in Gaza at the same time. It could have been a way of establishing the dilemma over a longer period of time, thereby increasing the pressure; however, it might have been easier to stop them separately using force, without the media drama of the first journey.

In addition to the core feature of a dilemma action, we were able to identify five factors frequently found in actual dilemma actions that add to the difficulty in making choices. At the outset we suspected that some of these would be a necessary part of a dilemma action, but looking at a number of cases revealed that they were not. Nevertheless, these factors can add to the dilemma: (1) the action has a constructive, positive element; (2) activists use surprise or unpredictability; and (3) opponents’ prime choices are in different domains. Different domains mean that the consequences are not readily compared, for example when one choice has ideological consequences and another has political consequences. Dilemma actions can also construct a timing that (4) appeals to mass media coverage, making it difficult for authorities to ignore them and (5) appeal to widely held beliefs within society. These factors contribute to making the dilemma more difficult to “solve,” but are not essential in constructing it. Governments and their agents, such as police and prison officials are often those who are forced to deal with dilemmas. However, this is not a core feature of a dilemma action, since it can be directed towards private companies, for example banks or other financial institutions as well.

Stellan Vinthagen, nonviolent scholar and activist and himself on board the ship to Gaza in 2012 has written that two aspects of the 2010 flotilla combined to make this a more powerful dilemma action compared to previous attempts of breaking the blockade: (1) it was ordinary humanitarian assistance, not just symbolic amounts, and (2) the delivery by ship meant that the activists were not depending on the Israeli authorities in order to break the blockade. Vinthagen writes: “A ship is not “on its way” to do an action. The departure itself marks the beginning of the action: the challenge of the blockade. The action had already been going on for several days before Israel had a realistic chance of stopping it.”xii

Usually the best option for the opponents is to stop the action without anybody noticing. The activists’ strategy is then to make it as public as possible. In the freedom flotillas, organizers increased attention by involving people from different countries, including journalists, authors and parliamentarians. On land, the Israeli government controlled access to Gaza. The freedom flotilla organizers therefore made a conscious choice to make the sea their arena. They could decide when to set out. However, by 2011 they had lost the element of surprise and were unable to foresee the Israeli government’s method of responding. Experience changed the Israeli authorities’ calculation, and their preparations meant that the conditions changed and the dilemma no longer the same. Activists need to change their plans and preparation to ensure that the dilemma remain present in a different form. That the Israelis worked hard to defuse a potential repetition of the 2010 experience provides additional evidence that the 2010 events backfired on the Israeli government.

Something that makes the dilemmas difficult is when the opponent has to compare consequences from different domains. It can be difficult to compare the benefit of an approving reaction from supporters with negative feedback from a different audience. Israeli authorities had to compare their image of themselves as upholding a blockade meant to protect Israel with the outrage generated when international audiences saw this as an assault on humanitarian aid workers in international waters.

Unpredictability was also a factor hindering the process of comparing choices. Neither the Israelis nor the freedom flotilla could readily predict or control how the Turkish government or people would react and what consequences their reaction would have in the long run.

Timing is another aspect of dilemma actions highlighted by the Freedom Flotillas. The Israeli authorities not only had to make choices between incomparable realms, but also take the short, middle and long term consequences into consideration. What seems to be a good solution in the short run might backfire in the long run.

Dilemma actions are a type of action in which opponents have to make a choice between two or more responses, each of which has significant negative aspects; the responses are not readily comparable, which is the nub of the dilemma. For activists, dilemma actions can seem attractive because they seem to offer the prospect of success no matter what the opponent does. In spite of this, activists should not become obsessed with creating dilemma actions. Although they offer some opportunities, creating dilemmas for the opponent is not necessary for nonviolent actions to be successful in the eyes of their organizers or bystanders.

Majken Jul Sørensen is active in the Swedish anti-militarist network Ofog. The research for this article was done collaborately by Brian Martin and Majken Jul Sørensen. A longer article about dilemma actions is forthcoming in Peace & Change in early 2014.