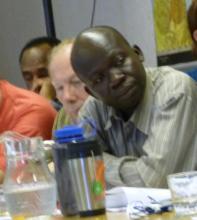 In South Sudan, the seeds of nonviolence are being sown and cultivated by the Organisation for Nonviolence and Development (ONAD), a War Resisters' International affiliate.

Despite changes of attitudes and behaviour of individuals and groups as a result of ONAD's nonviolence trainings, many people still believe armed struggle can bring the changes they hope to see. In South Sudan, society is highly militarized with some civilians owning weapons. While some have surrendered their guns to the government, disarmament of both minds and hearts are equally necessary if we are to avoid ongoing militarization of society.

In July 2012, I represented ONAD at an African nonviolence training exchange hosted by War Resisters International in Johannesburg, South Africa, which brought nonviolence trainers from across the continent together. Building networks and links between like-minded organisations from across a continent at events like this means we can continue to respond creatively to conflict and violence, challenging the assumptions of militarism and building the nonviolent future we envision in our home countries.

At this meeting, we founded the African Nonviolence and Peacebuilding Network to provide ongoing support for nonviolence trainers across Africa, and we are looking forward to gathering again as part of WRI's international conference, 'Small Actions, Big Movements: The Continuum of Nonviolence' in South Africa in July 2014. The conference will be a big stepping stone for the continued development and promotion of nonviolence in Africa, and will bring activists from across the continent and beyond together to share stories and ideas, to foster stronger links and to strategise for working together in the future. The conference will also mean that lots of new groups from across Africa will find out about WRI's nonviolence work for the first time, to consider the root causes of violence in their communities and how to counter it.

In the last week of October, ONAD hosted a ten-day nonviolence 'training for trainers' in South Sudan. Facilitated jointly by a British, a Swedish, and two local facilitators, such 'training for trainers' give space for nonviolence trainers to develop skills that allow them to deliver their own trainings for their communities and networks, support and encourage networks of nonviolent activists, and provide a space for those who are responsible for nonviolence trainings to learn from one another's stories, experiences and skills. The recent 2013 external evaluation of the 'training for trainers' revealed that those trained not only learnt new skills, but were empowered to take nonviolent actions to transform their situations for the better.

War Resisters' International organises nonviolence trainings for activists in countries all over the world – please support our work with a donation.

Our 'training for trainers' events provide participants with the tools and experiences they need to understand the dynamics of conflict, develop tools for nonviolent conflict transformation and leave better equipped to support their organisations to work for peace in South Sudan.

Throughout the training we used WRI's 'Handbook for Nonviolent Campaigns', and having a number of translations available, including Arabic, meant that we were able to offer useful resources to a wide variety of attendees to use in the future - we're very excited that the Handbook for Nonviolent Campaigns is being revised and updated, making it even more relevant to activists across the world, including in Africa.

The original handbook was co-authored by the WRI network in 2009, and since then has been translated into nine languages including Nepalese, Russian and Turkish. Releasing a new edition of the Handbook for Nonviolent Campaigns means that resources will be more up to date, with new material, case studies, and more material of particular relevance to activists in the majority world, many of whom are working in some of the most oppressive environments in the world, like Eritrea. Eritrea has been called 'Africa's North Korea' – political dissent is brutally punished, the military dominates public life, and in June 2013 'Reporters without Borders' ranked the country as the worst place in the world to be a journalist. However, the Eritrean diaspora continues to support activists in the country, for example by using 'robocall' machines to encourage people, en masse, to use small acts of resistance – like 'silencing the city' by staying at home on Friday nights – as a sign of objection to the regime, a campaign called Arbi Harnet.

Please send a donation today so that WRI can continue to support nonviolent resistance in Eritrea and elsewhere in Africa.

The Handbook for Nonviolent Campaigns has been translated by the Eritrean diaspora into Tigrinya, the language of the largest ethnic group in Eritrea, and is now used by the diaspora and in Eritrea itself to support those working for grassroots change. The new handbook will be released at the 'Small Actions, Big Movements' conference in South Africa, in July 2014.

All of this work relies on resources, and WRI affiliates are already highly committed to contributing their time, energy and financial resources to support the promotion of nonviolence in countries all over the world. Updating and printing the new Handbook for Nonviolent Campaigns, delivering nonviolence training, supporting regional networks, and hosting events like the 'Small Actions, Big Movements' conference in South Africa, all rely on the financial support of individual donors, like you. Please donate to WRI – there is a form included in this letter with instructions on how to donate to WRI.

Thank you for supporting War Resisters' Internationals work, your support is vital for our work promoting nonviolence throughout the world, to work against war and the preparation for war.