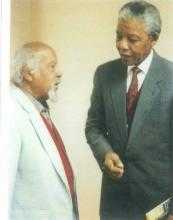 This week, War Resisters' International has joined the world in mourning the passing of Nelson Mandela.

At the same time, we have been devastated by the loss of our Chair Howard Clark - one of WRI's own inspirations.

It seems fitting, then, that this edition of the The Broken Rifle - the 98th - focuses on stories of antimilitarism, reconciliation and social movements in Africa, particularly in the run up to the Small Actions, Big Movements: the Continuum of Nonviolence conference that Howard was so passionate about, and active in planning. We will go to South Africa to learn from the experience of those who worked and walked with Mandela, and from those who today continue the nonviolently for change in Africa and elsewhere.

Many of the articles in this edition are written by those active in the African Nonviolence and Peacebuilding Network, formed in Johannesburg in July 2012, and key in the planning of the conference.

Matt Meyer kicks us off with a look at the place the upcoming conference has in the
history of African engagement with WRI - and indeed the ways non-African WRI groups have become involved in the life of that continent.

On South Africa itself, read Pearl Pillay's account of the background and impact of 2012's Marikana massacre, and Zara Trafford's piece 'Prostitution, Patriarchy and Power in the Military', on the work on Embrace Dignity - one of the key conference partners.

From elsewhere in Africa, we have Moses Monday of the Organization for Nonviolence and Development looking at Nonviolence at work in South Sudan, Elavie Ndura on Dealing with Trauma in Post- Conflict Burundi and the African Great Lakes Region, and American Friends Service Committee's Dereje Wordofa on the links between poverty, unemployment, security and hope in Africa.

April Carter contributes a wonderfully insightful piece - Lessons from the Arab Spring - taking our attention to North Africa and the surrounding states.

Finally, though 1st December is now passed, it's never too late to write to someone who's imprisoned for their work for peace - such as those conscientious objectors in Eritrea, who have been imprisoned since 1994. Take a look at how to do so in Prisoners for Peace day info.