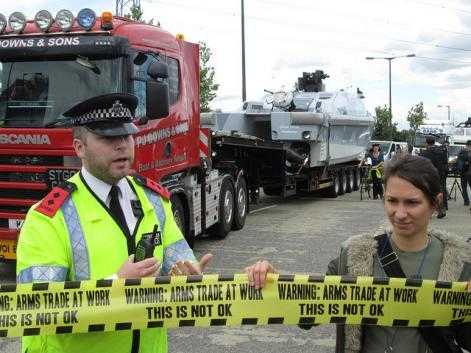 A key event for the international arms trade took place in London from 9-13 Sept: the DSEi arms fair which hosted 1500 arms companies and 30,000 arms buyers and sellers.

The UK government’s invite list was a roll call of authoritarian regimes and human rights abusers. Unarmed protesters have been killed this year on the streets of Bahrain, Turkey, and Brazil. Yet not only were the companies which supplied the teargas used in this repression at DSEi, each of their militaries was there too - at the invitation of the UK government's arms sales unit.

But the arms fair faced daily direct action in solidarity with people who face its weapons. The number of groups taking part and diverse tactics used meant that the arms fair was put under serious pressure. Here's a whistle stop tour of some of the highlights...

Within minutes of beginning, the 'Occupy vs the Arms Fair' action had halted the entrance of two boats with gun turrets for display at the fair. Hundreds of people – some at their first ever protest – blocked the Eastern entrance to Excel for over four hours. Eighteen people were arrested for obstruction of the highway, after refusing to leave the road to allow vehicles access to the arms fair. Diversity of tactics took on a new meaning as priests refused to leave the road until their exorcism of the fair had been completed, while others locked on, died-in and performed songs and theatre in the road. The action involved protesters from Algeria, Bahrain, Brazil and Turkey who know first hand the arms trade's impact.

The Occupy camp established on the day continued as a visible challenge to the arms fair at its Eastern entrance throughout the week.

In Central London campaigners superglued themselves to the entrances of the offices of Lockheed Martin, the world’s largest arms company, which exhibited at DSEi. They prevented access for three hours. Police arrested five people who were not released until the following morning.

At the ExCel centre, tens of campaigners gathered to challenge the drones conference taking place that day. In Wales, over a hundred people took action at Aberporth to challenge drones too. Activists stopped an armoured vehicle from entering the ExCel complex by sitting in the road.

Hundreds gathered at the arms fair on Monday night for a silent vigil – a powerful moment on the eve of the official opening of the fair.

Tuesday: Christian activists prevented the main visitor entrance opening for over an hour. Cheeky ‘meet and greet’ actions sent arms dealers in all sorts of directions (apart from towards the fair). The opening night reception at the Cutty Sark was blockaded.

As arms dealers arrived for the official opening of the arms fair, campaigners were there to meet them at London City Airport: to help them find their way (the long way round!) and point them out to fellow passengers. This clearly had an impact as later in the week, announcements were heard advising DSEi delegates to remove their passes before boarding the train!

The main entrance for visitors to the fair was obstructed for over forty minutes by Christian activists who superglued themselves together, causing a huge backlog of arms dealers arriving to Custom House station. Five people were arrested.

Meanwhile protesters in Bath and elsewhere have challenged the arms fair exhibitors on their doorstep.

Campaigners discovered the location of a dinner for the opening night of the arms fair, where senior civil servants from the governments’ arms sales unit, UKTI DSO, were in attendance: at the Cutty Sark. Activists were there first and blocked all four entrances. Arms dealers eventually had to enter via a fire exit!

An activist climbed on the roof of the ExCel, while others challenged the arms dealers below. A journalist had his press credentials removed for filming this protest and using the hashtag #stopdsei. Meanwhile it emerged that illegal weapons were being advertised inside the fair.

Activists from the Black Katz Collective occupied the foyer of BAE Systems for a noise demo and a wreath-laying ceremony remembering the victims of the arms trade was attended by local primary school children.

Campaigners took the message to parliament ahead of a debate on the government’s arms sales unit.

A woman was arrested at Custom House DLR station for attempting to leaflet arms dealers entering the fair. She was released five hours later without charge.
A critical mass cycle ride converged with other protesters for a “charity” event for arms dealers. Protesters obstructed the entrance, and engaged local residents with information about the arms fair.

Friday: Occupy camp joined by campaigners for protest on final day of the fair. Vince Cable’s constituents hold vigil at his surgery.

Hundreds of ‘DSEi End Product’ cards, designed to remind arms dealers of the human impact of their trade, found their way into hotel rooms, bars, and car parks. Local constituents challenged Vince Cable on the government’s role in organising the arms fair at a vigil at his surgery in Twickenham. Cable is responsible for the departments which both approve export licenses and promote weapons sales abroad.

The amazing Occupy camp, which survived wind, rain and sabotage to maintain a 24-hour challenge to the arms fair at its Eastern entrance was joined by others for a final protest before packing up as the arms dealers headed home.

Australians stopped their arms fair. We can too!

In 2008, grassroots action in Australia brought an end to their arms fair. The energy, creativity and diversity of actions during the DSEi arms fair this year means it is not hard to imagine that we can do the same here. The activists arrested for taking action at the arms fair plan to put the arms trade on trial – asking “Where is the real wrong?”. They're asking for messages of support and for solidarity at their court appearances.

In the next two years, Campaign Against Arms Trade and the Stop the Arms Fair coalition will be running workshops and direct action training to build the network of people ready to challenge the arms fair. The map of local arms company sites multiplies the possibilities for action. As Chris Howson, the priest who 'exorcised' the arms fair put it: "If 5,000 had turned up - we could have closed the whole thing down." Let's make it happen!