Colombia: Pillar of the United States in Latin America 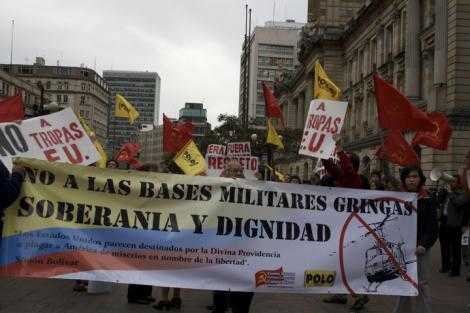 In Colombia in 2009 Álvaro Uribe’s government announced the installation of seven United States military bases, in different military installations of the Colombian Military Forces, through which they could threaten and spy on Venezuela, Ecuador, Brazil and the Caribbean. This was with the excuse of supporting the fight against drugs and guerilla forces in the country. For this, the government made use of an agreement issued in 1962 that established cooperation between the U.S.A. and Colombia for social issues. The announcement produced widespread national condemnation and a widespread movement was formed: the Colombia Coalition NO foundation, which facilitated important counter-mobilisations, adding different actors from civil society, political movements and parties. There was also a strong international rejection, which increased the tension between Colombia and its neighbours, demonstrated in special sessions of UNASUR (Unión de Naciones Suramericanas - Union of South American Nations). A few months later the Colombian Constitutional Court declared the convention with the United States unconstitutional, and demanded that a matter of such magnitude should pass by Congress. The government coalition, in the face such a disturbance, decided not to submit this to the consideration of the Colombian Parliament.

In other places, these events might be seen as extreme, or perhaps they are like the fundamentalist and militant extremism of Álvaro Uribe, but, this in fact this is part of the pattern of Colombian policy, since the Minister of Defence at that time was the current president of the Republic, Juan Manuel Santos. The events brought to attention once again the close relationship of the Colombian government with the Pentagon, the subordination of the Colombian Armed Forces to the interests of the Pentagon, and the high degree of militarization of the country. This is an obstacle for South America’s ability to have an independent military policy and be converted into a region of peace.

During the last Summit of the Americas, held in Cartagena in April 2012, President Obama signalled “we have continued investing in programmes like the Colombia Plan, but now we are working with Colombia, considering its best practices around issues such as the security of its citizens, so that not only the United States, but also Colombia, provide technical assistance and training to Central American and Caribbean countries, to find ways in which they can duplicate part of the success that we have seen in Colombia” 1. He has given specific resources so that the Colombian government carries out part of the work advising armies of other countries. In February 2012 the Colombian Minister of Defence, Juan Carlos Pinzón, held a high level meeting in Washington. This was classified as a type of meeting that the United States only holds with countries like South Korea or the United Kingdom, and was designed to prepare a strategy post the Colombia Plan. In April, during a visit to Colombia by León Paneta, ex-defence secretary of the U.S.A., it was revealed that Colombia had trained thousands of Central American and Mexican soldiers, and in a third high-level dialogue held on the 26th and 27th November in Bogotá, the presidential advisor for matters of the Western Hemisphere, Ricardo Zúñiga, said that the meeting had the purpose of “talk[ing] about the future of our cooperation in security, because the focus has been for many years on the Colombian internal situation, but now it is more global and regional”. “Now Colombia is playing a larger role than before, collaborating in the region, with Mexico, with Central America and the Caribbean in the fight against organised crime”2, he added.

All of this has served to shower Colombia with praise, a country that was rated by Obama as a successful case of the fight against organised crime and worthy of exporting its experience. Just as this military cooperation was being emphasised, in Colombia the darkest years of human rights violations were experienced: the murder of thousands of unarmed citizens presented as guerrillas to obtain rewards, the spread of paramilitary armies, the expulsion of thousands of peasants from their land, the assassinations, amongst many other things. Simultaneously, the increase of direct foreign investment and extractive industries was occurring, particularly the mining industry. The Colombia Plan that involved the expenditure of nearly 4 billion dollars in 10 years was concurrent with all this and did not involve a decrease in the production and trafficking of drugs.

At the start of the Colombia Plan, the total Direct Foreign Investment (DFI) was calculated as $2.4 billion. In 2011, the DFI in Colombia amounted to $14.4 billion, the fastest rate of growth in Latin America. Oil and gas constitute an increasingly important part of the DFI, in excess of around a tenth in the mid 90s, to almost a third in 2010, when it reached $4.3 billion.

In 2008, the United States Agency for International Development (USAID) boasted that “Colombia’s economic take-off after 2003 didn’t happen by chance.” Fifty-two areas of the Colombian economic system were subject to reform, and under the Colombia Plan, “USAID provided technical assistance to help design and implement policies that range from fiscal reform to the strengthening of the financial sector and to improve the environment for small businesses, and many more.”3

This was achieved through a combination of legal reforms and fiscal incentives, the signing of new agreements of free commerce (between Colombia and the United States, as well as between Colombia and Canada) and the militarisation of the mining industry. The U.S.A. trained “energy battalions” to protect pipelines, roads and other infrastructure projects.

The well-documented cases of the banana company Chiquita Brands, the mining company Drummond and the oil giant BP, have examined links between paramilitary groups and transnational corporations from the United States. In March 2007 in a court in Washington, DC, representatives of Chiquita Brands were found guilty of having made payments to the paramilitary group Autodefensas Unidas de Colombia (United Self-Defence of Colombia, AUC).

“Chiquita made more than 100 payments to the AUC with a value of more than $1.7 million,” according to the U.S.A. Department of Justice “Chiquita Brands paid blood money to terrorists like Carlos Castaño to protect their own financial interests,” according to the law firm that represented the victims.

Despite the abandonment of the agreement for the installation of military bases in Colombia, do not be mislead into thinking that the US strategy for the region, or the role the Colombian government wants to play, has changed. Clearly for international opinion, to pass from militant Uribe to diplomatic Santos is quite a leap. But Santos is the president who - when Cristina Kirchner announced the expropriation of 51% of Repsol, in a business forum with Mariano Rajoy in Bogotá – said, “we don’t expropriate here”.

The United States closely associates military help and a war on drug trafficking with the implementation of a predatory economic model and the signing of a free trade agreement. For example, in the trade cooperation inlcuding the EU, Chile, Colombia, Mexico and Peru. Therefore, the importance that the U.S.A is giving in terms of military cooperation to the countries of the Pacific Agreement demands attention. Mexico, Colombia, Peru and Chile firstly, but also to Haiti and the Dominican Republic in the Caribbean and to Panama, Costa Rica, Honduras and Guatemala in Central America.

In the last year we have seen the implementation of a military base in Concón in Chile, in Piura in Peru, and new military bases in Panama, five in Honduras, in Puebla in Mexico. What stands out is that immediately after Porfirio Lobo’s coup d’état, Colombia signed a pact of cooperation with Honduras for security, and in the last year has signed similar agreements with Peru, Chile and Mexico.

Finally, and no less despicable, is that Colombia is refining its collaboration with the armed apparatuses of the world, such as the recent agreement that was signed with NATO, a military organisation that intervenes around the world under the interests of the United States and the European powers (remember the cases of Belgrade, Afghanistan, Libya and currently Syria). To insert Colombia in the biggest warmongering club in the world is a disgrace for Colombia, besides being a challenge to integration processes in the region that look for independence from the United States in political, economic and military relationships in the continent. Santos’s declaration has generated distrust and insecurity in Latin American countries that were beginning to advance the consolidation of their own security and defence doctrine that didn’t have the United States as a reference and that Santos’s government always tried to block and delay. This makes clear the alliance between Washington and Bogotá, who’s great agent is the Colombian government led by its president.

Andrés Aristizábal is a member of Colombia No Bases Coalition