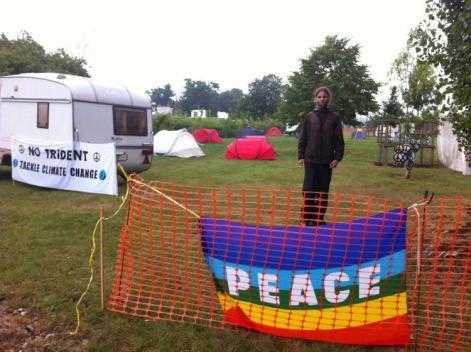 In 2016 the UK government will finalise the decision to build a new nuclear weapons system to replace the present Trident system (http://actionawe.org/the-trident-system/). The nuclear submarines that carry Trident are getting old, so the government has pledged to finalise contracts to replace them in 2016 in order to build a new generation of nuclear weapons at an estimated cost of £76–100 billion. This is more than the current planned public spending cuts of £81 billion. If the contracts go ahead, the warheads would be designed and manufactured at AWE (Atomic Weapons Establishment) Aldermaston and Burghfield, in Berkshire, about 50 miles west of London ( http://actionawe.org/awe-burghfield-maps-gates/ ).

Such a replacement and modernisation of a nuclear weapon system would be illegal and undermine international law as it breaches the commitment to nuclear disarmament that all nuclear weapon states made under the Non-Proliferation Treaty (NPT). The world is in a very dangerous situation caused by the long delay in implementing Article VI of the NPT. As the UN General-Secretary Ban Ki-moon recently said, “Delay comes with a high price tag. The longer we procrastinate, the greater the risk that these weapons will be used, will proliferate or be acquired by terrorists. But our aim must be more than keeping the deadliest of weapons from 'falling into the wrong hands'. There are no right hands for wrong weapons........ I urge all nuclear-armed States to reconsider their national nuclear posture. Nuclear deterrence is not a solution to international peace and stability. It is an obstacle.”1

It is not just the General-Secretary getting frustrated with the nuclear weapon states. The majority non-nuclear states are now actively campaigning for an international treaty to ban all nuclear weapons. “Three in four governments support the idea of a treaty to outlaw and eliminate nuclear weapons.”2

In the UK, anti-nuclear activists (including those who supported Trident Ploughshares and Faslane 365) helped galvanise public opposition to Trident. This succeeded to the extent that the present Scottish Government have promised to ban all nuclear weapons from Scotland if the Scots vote for independence in the Referendum (to be held in 2014) and they come to power in the new nation. It is important now that there is a special focus on the English dimension – the atomic weapon establishments at Aldermaston and Burghfield. If we succeed here then the potential for world-wide disarmament is great. Once the UK abandons its reliance on nuclear weapons we can expect a 'good domino' effect to cascade around the world.

A new grass-roots campaign called Action AWE (Atomic Weapons Eradication)4 has recently formed to take up this struggle and to combine the strengths of as many peace and justice groups as possible. Not only UK groups but also European groups, including those in Germany, are being asked to join this campaign and come and help out. Action AWE is dedicated to halting nuclear weapons production at the Atomic Weapons Establishment factories at Aldermaston5 and Burghfield. Groups and individuals started organising their own autonomous actions and events from February 2013, when the Campaign launched. They are raising awareness of the catastrophic humanitarian consequences of nuclear weapons and exerting political pressure for Britain to end the production, replacement and deployment of Trident and to join other countries in negotiating a global treaty to ban nuclear weapons.

Trident Ploughshares is one of the groups supporting Action AWE and they are organising a 2 week International Disarmament Camp at Burghfield from 26th August to the 7th September 2013. There will be a Big Blockade of Burghfield on Monday 2nd September to which all readers are invited.

The two weeks disarmament camp will provide an opportunity for peaceful responsible people to carry out lots of direct disarmament work at Burghfield and more detailed information and maps on these two nuclear bases can be found at http://actionawe.org/topics/uks-nuclear-weapons/atomic-weapons-establis…

The camp is open to anti-nuclear activists from other European countries who will be joining the camp for as long as they wish though most will be arriving in time for the Big Blockade on September 2nd. Groups from the European Anti-militarist Network will be joining the camp which will provide a supportive environment where we can strengthen our ability to work well together, learn new skills, renew our friendships, vision and commitment, and enjoy ourselves. There are lots of disarmament opportunities at these bases, even during the camp when the Ministry of Defence police know we are around.

You do not have to be a member of Trident Ploughshares to attend the camp. So long as you are willing to abide by our non-violent guidelines you will be very welcome. See
http://tridentploughshares.org/awe-burghfield-summer-disarmament-camp-2…

Nuclear weapons are linked to every major economic, health, environmental, humanitarian,
moral and political issue facing us today, including climate change, militarism, poverty and insecurity. You can find a number of linking essays at http://actionawe.org/essays-3/

The global movement for a treaty to ban nuclear weapons is gathering pace. NOW IS THE TIME for all of us to to get involved and take AWEsome action against replacing Britain’s nuclear weapons. We can be creative, inspired, imaginative and daring. People power creates change. So, bring your tent, your passion and commitment and join us to stop the next generation of nuclear weapons from being built.

For more about ACTION AWE, how it links to your campaigns, and how you can take part, please visit our website: www.ActionAWE.org or telephone 0845-458-88362 or contact Angie at info@actionawe.org