Antimilitarists in Gezi Park: We are not going to be anyone's soldier 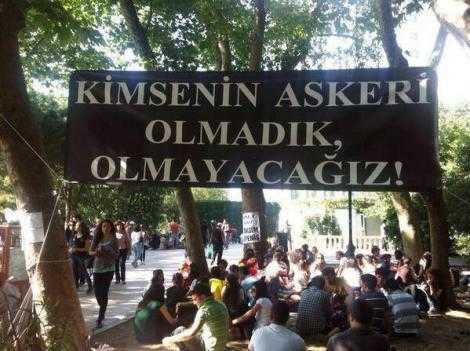 It started with a park. The government wanted to destroy the only green public park that exists in the centre of Istanbul city. What for? To build a military barracks, they said. Then they said it would be a shopping centre. They gave other reasons, too.

This was the last straw. Since the AKP government (a right wing conservative party) have ruled the country, Turkey has faced one of the most authoritarian governments in its history: abortion is controlled, the sale of alcohol is limited, people are being cautioned when they kiss in a metro station, cases of rape against women have increased incredibly, and there are many other shameful examples. The republicans have lost their "respected" position (they had been the majority since the very beginning of Turkish republic). The Turkish army has also lost its respected position, because of the AKP government's arrangements. Like any state, the Turkish government was using the control mechanism of divide and rule. But that was the day that people said "I have had enough!" to this government's undemocratic politics.

The protesters who went to protect the park initially were mostly environmentalists. After the police's brutal attack at 5am in the morning - when the protesters were asleep in their tents - the protest grew. Thousand of people went to support and shout against the brutal attacks. Republicans were shouting "We are soldiers of Atatürk". The President's supporters shouting "We are soldiers of Tayyip (the second name of the president)". And then we started to hear and see the slogans of antimilitarist activists "We're are not going to be anyone's soldier".

After the third day of police attacks, there were rumours that the army were going to take control and stop the police. The answer of the resisters was very clear: we want the police to stop attacking us, and we don’t want army to either: we do not want any power to oppress our resistance!

There is great solidarity amongst the protesters who have very different political opinions. Before it was impossible to see people with those ideas struggling together, but now we have seen that we can. Now, to respect alternative opinions, republicans don’t shout those slogans anymore. This kind of learning has also come from LGBTT people and women. Since the beginning of the resistance, many people have been using terms of abuse usually used against LGBTT people, and women, to speak of the government. Now there is a greater awareness of that issue, after many feminists and LGBTT activists have called for people not to use them. People are very careful not to discriminate against anyone. This is a great lesson, where we have learnt from each other whilst we are resisting!

For live updates from Gezi Park go to: http://gezipark.nadir.org/