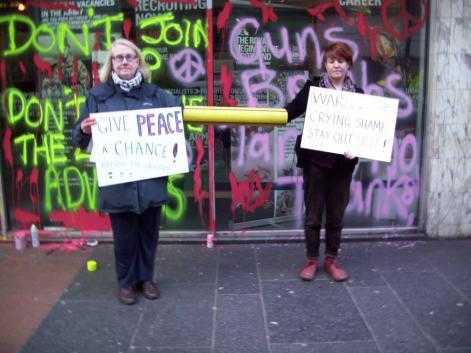 Three women painted the windows of the Army recruiting office in Glasgow yesterday, 1st March, in protest at the dishonest propaganda used to persuade young people to join up.

At 8am Barbara Dowling and Leonna O’Neill painted in large colourful letters “DON’T JOIN UP. DON’T BELIEVE THE LYING ADVERTS”, “GUNS, BOMBS, TANKS? NO THANKS” and “NO TO WAR” on the windows of the Queen Street office. Mary Millington handed out leaflets telling the story of a young man who joined the army to make his Mum feel proud and ended up being badly injured in Afghanistan.

When the police arrived Barbara and Leonna locked-on to each other and stood in the way to prevent the windows from being cleaned. All three then sat down and after over an hour and a half were cut free and arrested. At Stewart Street police office they were charged with obstructing the police and vandalism.

Barbara Dowling said “Becoming a soldier is promoted as a great career but the glossy posters don’t mention the injuries, both physical and mental, suffered by so many, never mind the deaths. The suffering caused to civilians in the name of “fighting terrorism” is nowhere to be seen either.”

All three women were released on bail and are due to appear in Glasgow Sheriff Court on 23rd March.

Notes.
BBC: On 13th February the number of British military deaths in Afghanistan stands at 398
Trident Ploughshares is a part of the international nuclear disarmament movement. Trident Ploughshares activists have pledged to disarm the UK Trident nuclear weapons system in a non-violent, open, peaceful, safe and fully accountable manner.
http://www.tridentploughshares.org
Faslane Peace Camp has been going for 30 years this June. They are organising 30 days of action to recognise the consistent resistance to Britain’s nuclear weapons system.