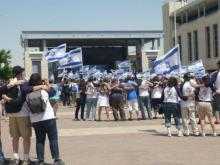 Most Israelis believe that an ongoing state of emergency is justified, and that a large conscript and reservist military will help to keep them safe from surrounding enemies, who desire to annihilate Israel and 'push us into the sea'.

Palestinians had lived in the region for centuries before the establishment of the Jewish state in 1948, but the collective memory of most Jewish Israelis fails to acknowledge what transpired during the war and its immediate aftermath, when hundreds of villages were systematically wiped off the map. Israel, however - envisaged as a safe haven - is considered worldwide as the land of the Jews.

Currently, 20% of the Israeli population is not Jewish, but Muslim, Christian, or another religion. These various faiths celebrate different holidays. Since Israel considers itself a Jewish state, Jewish holidays are as national holidays.

Every spring, Israel observes three national holidays that define the Zionist nation: Holocaust Remembrance, Memorial to Fallen Soldiers and Independence Day. One recalls the horrors of the Holocaust. The next pays homage to fallen soldiers and terrorist victims. The next, straight after Memorial Day, is Independence Day. For my Palestinian friends this is Nakba Day, and commemorates their catastrophe - a memorial not included in Israel’s official calendar. These days are emotionally-charged, and full of grief for many. They focus on the many victims, the great suffering and loss of life during the Holocaust, and on the fallen Jewish soldiers who died so that a Jewish State could exist. Simultaneously, they project the possibility of victimisation in the future.

On April 26 2009, one day before the Memorial Day for Fallen Soldiers, in a well publicised act that exploited the day's charged character, police interrogated and raided the homes of six New Profile activists. They confiscated their personal computers, and, in some cases, those belonging to their families. The detained activists were released on bail but their computers were impounded for thirty days. Over the next fortnight, police summoned a ten more activists for interrogation, but with less fanfare and media coverage.

The activists were accused of inciting opposition to conscription (calling for a refusal of military service) - an act of treason. The attempt to incriminate New Profile amounts to a declaration of war on youth, as rising numbers of Jewish Israelis, as well as the Druze minority, were unable or unwilling to accept the over-used Israeli dictate 'We have no other choice', and refuse to do military service.

The investigation into New Profile was initiated because of a concern in government and defence circles about the growing trend of draft evasion. In July 2007 Defense Minister Ehud Barak and Chief of Staff Gabi Ashkenazi declared publicly that they would fight this trend.

But clearly it was not really New Profile that they were worried about. New Profile is a nonprofit organisation with no more than 60 active members at any given moment. It is just that we seemed an easy and visible scapegoat through which the authorities hoped to plant fear and intimidate future draft resisters.

The criminal investigation subjected us to new and difficult challenges, but we decided to actively investigate the investigation as an act of resistance. Our feminist approach inspired this response, and this is how we claim a sense of involvement - by documenting, discussing, and analyzing the events, and riding out the media coverage, good and bad. Our decision to meet the challenge of the investigation by conducting our own counter-investigation added a new and valuable dimension to the experience.

Today, though New Profile fulfils legal requirements for NGOs, and our status has been approved by the High Court of Justice, we are subject to harassment, particularly by extreme right-wing factions in the Knesset . It is easy to feel confused by public life in Israel because it is riddled with ambiguities. The newspaper Haaretz is a good example of this. It reflects the relatively small population of Israeli progressives and liberals that forms its readership, because it does occasionally publish articles that are critical of mainstream militarist policies and of the occupation, creating an illusion of progressiveness. But the opinions of the radical left are not represented, and this amounts to a policy of silencing.

One recent example of how fear affects our judgment is the fact that during the recent Egyptian uprisings, most Israeli opinion was loyally in favor of Mubarak, while the rest of the world ecstatically cheered on the revolution. As we witness an historic phenomenon, Israeli politicians speak of the threat to Israel’s existence.

Today the same official rhetoric that regards Iran as a nuclear threat to Israel - designed to promote panic amongst citizens and Jews in the Diaspora - is used to mobilise people across the board. Fear is used as a tool to achieve compliance and reverence. This, among other things, is militarism. Fear promotes and sustains ignorance. As Israelis, we secure national identity or international standing by 'othering' and playing the blame game. It is them, not us. We have no partners for peace. The blame game leaves little room for dialogue, forgiveness, or accountability.

It is crucially important to create awareness in the international community about what is going on in Israel. I believe that our youth is our salvation. As Israeli law offers virtually no provision for conscientious objection, young people have voted with their feet. Despite the ongoing draft, more than half of all eligible Israelis no longer serve or complete their obligatory service in the military. I am the proud parent of four sons who refused to do military service.