Angie Zelter is in Korea supporting the people of Ganjeong Village in their struggle to stop the destruction of Jeju Island where the South Korean military has begun construction of a naval base which will be the port for the US Navy’s Aegis Destroyers. 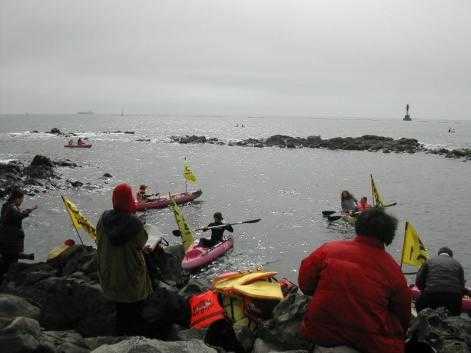 What an amazing day yesterday was . The villagers feel very supported and happy with our contribution. We held a joint press conference at the main gate that was closed for us and when none of the Korean, US, Samsung or others involved in the building of the naval base were willing to come and talk to us we proceeded to the destruction gate and demonstrated there. Then locals and internationals paddled their canoes from the dock for a half hour and got to the sacred rocks of Gureombi. While others were putting up flags I slowly walked along the razor wire until I managed to find a place where I could wriggle through the razor wire and get on the other side before the police could reach me. The plan had been for as many of us as possible to do this but the razor wire was rather intimidating. The villagers say the wire is illegal and the rocks are all theirs.

Slowly making my way back to the others we were all together only separated bythe wire. More and more villagers joined us and they took part in a religious service and then held a meeting. We sang songs - the Korean singing is wonderful but we added our own Swedish, Japanese and other songs. I sang ’They say our lands are out of our hands - our lives and our futures are out of our hands, this land is not yours to put boundaries around, we’ll stay and get stronger our voices resound’ - which went down very well. The atmosphere was fantastic and the sun came out for the first time. The volcanic rock is quite an amazing ecosystem.

After an hour or so another international Benjie from France managed to join me on the other side of the wire and after another few hours we managed to find a way to get others in. We were all arrested but I refused to give my real name calling myself ’Save Jeju’ and refused to accept or sign for a fine and was eventually released without charge - maybe because I reminded the police of their duties under international law not to support preparations for a war of aggression or for basing nuclear weapons at this place! 12 internationals (2 from UK, 4 from USA, I from France, I from Ireland, 1 from New Zealand and 2 from Sweden) and 10 Koreans were arrested in various ways and 20 taken to 2 police stations. Many of the villagers joined us outside the local police station for more press work and a support vigil. The riot police were sent to contain us as we blockaded the prison entrances. Young male Koreans have to serve for 2 years and are often conscripted into the riot police and they seemed to be practising instigating riots! It was a most interesting experience. There was singing and dancing and random police snatches and some of the village singers were also arrested plus their gongs and drums. But we maintained a highly visible and sometimes noisy protest until everyone was released and we managed to negotiate for all the banners and instruments to be returned.

I must say how absolutely impressed I am by the organisation of this village’s resistance. They have the support of the majority of the village and not only did they manage to ferry even non canoe paddlers out to the rocks, but provided hot food and drink (delicious!) at the rocks and outside the police station. It was when the mattresses and blankets appeared and the candles were lit that the most violent riot police charge happened!! Some of them screamed abuse back and swore at the police (there is a different mode of protest here!) and some of us sang and sat down - our different methods merged well. Local supportive lawyers helped out. I am now off to Jeju City for yet another protest - press conference. Please ring or email the US and Korean Embassies and ask them to stop the blasting of the Gureombi Rocks for a military base. The villagers want a peace park not a war base. Bruce from global Network has been writing his blog and there are videos too - see http://space4peace.blogspot.com/ +