Protection against repression in Belarus 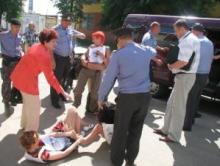 Given the sharp increase of repressive measures by the Belarusian government and its security services against the opposition it is currently almost impossible to be socio-politically active. However, for Nash Dom ('Our House' in Russian), a network for the protection of citizens’ rights – which since 2005 has cooperated with the German Bund für Soziale Verteidigung (Federation for Social Defence) – it has become easier to protect activists from state repression in the last couple of years.

In order to analyse methods of repression and to develop strategies with which the Belarusian opposition can deal with it, we distinguish between different levels of repression and different types of victims. Repression occurs both by order of the local authorities and the central government. It is directed at both random people and targeted people. The means of repression at the local and central level are mostly of an administrative nature, such as dismissal from work or expulsion from university. In addition, activists are intimidated by threats from the security forces or are sometimes forcibly admitted to a psychiatric ward. These measures affect not only the activists, but also their relatives. Mysterious deaths and disappearances of political opponents ordered exclusively by the central government have occurred (for example in 1999), although they are rare. At the governmental level political repression occurs in waves and in the past it was used as propaganda to mobilise the population and the state apparatus against the 'enemy within', diverting attention from other problems. At the local level, however, the repression is personal and long-term, since officials and activists from the opposition and the civil society usually know each other and frequently come into contact with each other. Random victims are the ones arrested during political actions. During central waves of persecution local officials also use targeted repression against the 'usual suspects' (persons and organisations), active in the specific sector. The systematic repression of individuals, which has the objective of eliminating or warning them, is only a small aspect of political persecution. However, the victims find it difficult to oppose it.

The Federation for Social defence (FSD), a German peace organisation dedicated to nonviolent conflict transformation, works with Our House. In their collaboration the FSD support various strategies of nonviolent defence of activists against state repression. After its foundation in 2004, Our House concentrated on the defence of activists, developed strategies and methods, and gained experience. In the first couple of years "Our House" acted unobtrusively and exclusively at the local level, dealing with problems such as the paving of roads and the urgent need for renovation of houses. With its increased strength the network became nationally-recognised, entered the public sphere and could finally confront the government. The methods and strategies of Our House can thereby be divided into four levels of action:

1. To avoid being made a target by the state means not to make yourself easy prey by being in the limelight. Young men, whose political activities are often described as an act of vandalism and who targeted for this, are harder to protect than grandmothers. Young men can be easily represented as enemies of the system, which legitimises their persecution. The experience shows that it is better to entrust elderly people or retirees with risky tasks instead of young activists. They can afford to take more risks when facing the police, because violence against them is condemned not only within society, but also within the police itself.

To avoid being made a target also means never to open your apartment door voluntarily to the police, even if the KGB or the police ask for 'just an interview'. The police cannnot break in without a warrant and especially in cases of random repression it is effective not to open the door. Through selective persecution, in contrast, it may even be necessary for an activist to leave the country for several months (if possible). Thanks to modern communication tools voluntary exile has become far less of a restriction on political activity than before. The coordinator of Our House Olga Karatsch even used it as an advantage to act as the face of the network in the public sphere, so that others could operate undetected.

2. To develop solidarity with the victims of political repression has proven to be effective. Our House not only sends cases of police checks or arrests to experts in legal protection, it also mobilises as many activists and sympathisers as possible, leading to a group of people gathering in front of the police station, who put pressure on the officials.

This solidarity is very effective in cases of random persecution and can prevent an arrest or lead to the quick release of detainees. During trials Our House also mobilises supporters, who show their solidarity with the accused and make their cases public.

Active solidarity can encourage the persecuted to continue their political work. In order for the to be supported by their social environment, it has proved to be important to include their family and friends in the solidarity work. This is very pertinent because the relatives of activists can also be objects of repression and may lose their jobs. Although these are often just threats, ill-informed relatives of activists are often not aware of that.

3. The work of Our House proves that the protection of victims of repression can hardly be separated from the confrontation of the responsible officials. To pursue the repressive officials, Our House exploits the weaknesses of the state apparatus, which although it seems like an indestructable monolith, is a subject to internal power struggles and conflicts. President Lukashenko intentionally plays his opponents against each other to secure his power. Our House can use the same tactic: through formal complaints, objections, appeals and other similar measures, activists make demands in the language of the bureacracy – for regulated responses, reactions and procedures. They force the affected officials to explain decisions in writing (forcing them to take responsibility), which can later be used against them. As a result, the officials get entangled in contradictory rules, which are often unconstitutional. At this point, it is difficult even for judges loyal to the regime to publicly justify disputed interpretations. Thus, procedural errors by officials can also become exposed. In addition Our House makes the formal or moral misconduct public, in order to put pressure on officials. To increase this pressure, Our House appeals to the families and the neighbours of the repressive officials, as well as to their colleagues. This has already led to the public release from duty of police officers and mutual control between colleagues. Our House is currently asking over 1000 police officers for help in overcoming police violence against women nationwide. The activists of Our House are treated with courtesy and care.

4. In addition to the strategies described above the opposition's structures must be protect. As size and visibility of the opposition movement in Belarus increase, so does the risk of a targeted destruction by the central power. Previously, this was not particularly difficult, as parties and movements usually rely on a strong leader and are structured hierarchically. If the leader gets imprisoned or publicly defamed, the organisation becomes paralysed. To protect themselves against this, organisations, networks and campaigns must adjust their structure accordingly and develop a security culture. Every organisation must work out for itself how this can be achieved. The practice of Our House will not be described here for security reasons.
An important aspect is protection from political defamation in government propaganda. In order to achieve this Our House tries to present itself as an “Advocate of the small people” and to build a solid network of supporters and its own communication channels with the local population. This ability to mobilise the population in its defence makes the authorities scared of the possible scandal if Our House were broken up.

The work of Our House shows that despite increased repression it is possible to defend the people of Belarus nonviolently. However, this is unfortunately not the case for large parts of the Belarusian opposition, whose roots in the population are weak and whose strategies and methods of defence against repression fail because of discord and disillusionment. As 'normal' people are becoming increasingly aware that state repression affects them in their daily lives, they are offering more solidarity and support to victims of political repression. This has led to a greater interest in monitoring the police and the secret services.