Overcoming trauma - dealing with the memories from prison

The invisible prison after prison 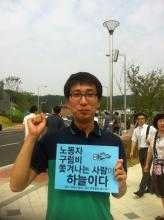 Reading a newspaper recently, I came across the words of some young girls who left home: 'If I want to survive I should not trust people'. These are the exact words I repeatedly heard while I was in prison.

I didn't write after I got released. I wanted to, but it felt too hard. Although I sensed something simmering inside me, I was not able to figure out what it was. I felt helpless; I couldn't be bothered to do anything. I didn't want to meet people. Those were the times when I was obsessed with the thought of staying alone. I felt like I had forgotten how to have equal relationships. I was overwhelmed by the fear of how I would be accepted by others. I didn't do anything that might have caused loss to me either. I've asked myself if I am using the fact that I was in prison as an excuse to cover up who I really am. What if prison is not different from society at all, and I was just bewildered to be thrown out to the wild reality I had not recognised before?

I kept trying to analyse myself, but it was difficult to think objectively. Or perhaps I was avoiding doing so by telling myself hypnotically that I was doing OK. I did not want to appear to be playing the victim.

I have come to reflect on what types of relationship I experienced in prison, what kinds of memories I am left with, and how they have caused me to remain helpless. Is it natural to become as I am now without spending time in prison?

I have tried to identify the origin of my avoidance of relationships. There are two attitudes that I have acquired from my time in prison: reservation in showing hospitality to others, and the belief that I must take things on on my own. They are connected: as long as I have no intention of making gestures of goodwill to others, I don't expect to receive hospitality from them. Thus, I seek to survive on my own.

Several experiences in the totally new environment of prison made me accustomed to 'reading' others. I needed to know whether my cellmates were on my side or enemies, so as to protect myself. As I got better at reading others, I became more defensive regarding relationships. I usually hesitated in appearing frienly for fear that I might be considered weak and/or manipulated. This could be called a strategy of showing indifference. Eventually I came to internalise the pretence of not recognising others' hardship. Instead of approaching people, I wanted them to approach me; I blamed and judged those who did not. The next step was to fall into a vicious circle of blaming myself for not being the person I would have hoped to be. I assume that this is the origin of my current aversion to meeting people.

I tried to deal with problems on my own out of consideration for those who would support me outside prison and who might get worried if I let them know about my difficulties. However, after futher trouble with both with guards and other prisoners, I realised that it was kind of inevitable that I tackled problems on my own to survive. I shrank more and more with the thought that I could not trust others because it was likely that I would get hurt if I did. It was easier to decide things for myself than to communicate; I came to avoid the fuss or conflict that might have occurred from interacting with cellmates.

Still not out of prison

After getting released, I encountered a new challenge when I participated in a nonviolent training for trainers. There was one session called 'Buddy Time'. I would have liked to break the wall around my heart by showing unconditional friendliness to my buddy, who I had never met before. During the session he received a call telling him that his relative had died. He asked me for a lift: I was in a dilemma because I wanted to help him but it would have meant missing the rest of the workshop. Someone told me to stay. I froze. I got cold feet and started shivering rapidly. I was unable to remain there. A few days later I found out that the person who told me to stay had only been trying to help: they didn't order, they advised me, thinking I would benefit more from doing so. Reflecting on the significance of the way I had responded I realised I had had the familiar feeling of humiliation that I had repeatedly experienced encountering authority in prison. Clearly there are more latent memories etched into me than I had previously thought.

Three months after my release I took part in the trauma healing program for conscientious objectors who have finished their prison sentence. The facilitator told us a story that invoked my memories of prison. It was about survivors of torture she had met among her clients. The most difficult memory for them is not just being physically assaulted but the authorities' threat that they would harm their family. They were traumatised that they had had to 'surrender' despite their convictions.

I recalled a time when I had had to keep begging forgiveness in front of the guards even though I did not believe I had done anything wrong. Whenever I remember this I start to shrink, and feel helpless, and my neck becomes stiff with rage. The guards knew only too well things prisoners wanted, such as an early release or a family visit, and used this to bring about submission. Despite the injustice, I had no choice but to show that I was surrendering in order to get what I wanted. I felt a great sense of shame and helplessness.

Many times I heard people say: 'other COs have also been like you.' These were consoling words in a way, but they also made me hesitate from speaking about my own experience, afraid of being accused of repeating what others had already said. I shrank as well as feeling uncomfortable when I heard someone say 'You're about to talk about your prison story again, aren't you?' Given this, it was very helpful for me to participate in the trauma healing program, because there I felt comfortable talking about my experience. Hearing stories of what other COs went through I realised it was a kind of collective memory, which also reassured me that I was not the cause of the problem. What the facilitator stressed during one session, that we convert the sense of shame into the sense of being insulted to visualise the perpetrator and escape the state of self-blamem, seems to have remained with me for the time being.occurred.

'Grant that I may not so much seek to be consoled, as to console; to be understood, as to understand; to be loved, as to love.' This passage touched me when I went to a Catholic service in prison. I myself did not console nor love others. Of course sometimes I did try to commit to a relationship, but I usually felt ashamed with memories of the past. It could be on the one hand shame from the fact I did not connect with others as human beings because I pre-judged them. It could also be a sense of shame in myself stemming from memories of how I too easily gave in to the authorities without being true to myself.

I hold on to the belief that all time is worthwhile; this helped me to endure prison. I will not inadvertently judge this period, nor blame others or myself. Let me not forget that there are those who are still willing to listen to and support me with affection. To live without regretting my decision to go to prison: this at the moment is what I would like most of all.