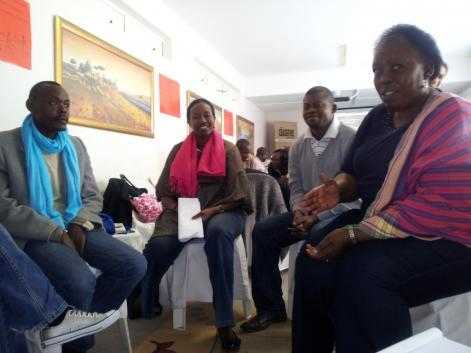 Between July 26 and 30, in Johannesburg, South Africa, peacemakers from 12 countries throughout Africa met to share experiences and birthed a new, continent-wide African Nonviolence and Peacebuilding Network (ANPN). As part of a War Resisters International (WRI) initiated African Nonviolence Trainer’s Exchange, the gathering was hosted by South Africa’s Ceasefire Campaign, an historic anti-war organization which grew out of the mass, anti-apartheid-oriented End Conscription Campaign. The delegates from more than a dozen organizations heard from Sherif Joseph Rizk, a participant in the 2011 Tahrir Square protests, and pledged to intensify coordinated nonviolent resistance from the south to the north of Africa. “Against the hope and potential that is unfolding in the Arab world,” noted Rizk, “nonviolence as a tool holds the promise to transform Africa, from the ‘lost continent’ to a place befitting both the birth of humankind and the birth of civilization.” Rizk’s inspiring stories and videos showcasing the ways in which creative, strategic cultural intervention and humor helped transform the abuses of Egyptian dictator Hosni Mubarak’s police violence into a deficit for the regime in the months before the 2011 uprising were balanced by his cautionary words about the current state of Egyptian affairs. As part of the New Republic Group, Rizk is amongst those working for continued de-militarization and democracy in his country. “We got rid of the dictator,” he said, “but we have not yet gotten rid of dictatorship.” The New Republic Group is looking to develop a road map to help strategically guide the grassroots democracy movement. Rizk’s participation in the exchange and the new network grows out of a hope that activists from the north to the south of the continent can learn from one another and continue an ongoing sharing of resources. The 30-plus participants hailed from South Sudan, Eritrea, Democratic Republic of Congo, Rwanda, Burundi, Kenya, Uganda, Malawi, Mozambique, Zimbabwe, Egypt and South Africa. A few supporters from Chile, Holland and the U.S. were also present, including participants from the International Center for Nonviolent Conflict and the humanist World Without Wars and Violence network. A day of workshops focused on issues relating to gender and sexuality, challenging participant’s perceptions and highlighting the violence of gender inequality in all levels of work. The Coalition of African Lesbians’ Dawn Cavanagh helped lead the group, noting that even among those who claim to oppose violence, the marginalization which lesbian, gay, bisexual, transgender and intersex people face within progressive African movements “sets the scene and makes it okay” for such violence to exist. Miles Rutendo Tanhira, from Gays and Lesbians of Zimbabwe, along with co-facilitators Isabelle Geuskens and Engender’s Bernedette Muthien, discussed the intolerance, discrimination, violence and even murder taking place across the continent against members of the LGBTI communities. The group pledged to make the struggle against these forms of violence a significant part of their work. Participants also discussed strategy, tactics and the principles of nonviolence. Stories about a wide assortment of campaigns were shared, including the work carried out by the Mozambican representatives to remove the rifle — an AK-47 — from the country’s flag. (Some suggested that replacing it with a broken rifle, the War Resisters’ symbol, might be a good idea!) Because the next major WRI conference is planned for South Africa in 2014, the ANPN decided both to base the work for the next two years in South Africa, and to hold the next in-person meeting at the time of and in conjunction with that event. Former South African parliamentarian and Deputy Minister of Defense and Health Nozizwe Madlala-Routledge was selected as one of the co-facilitators of ANPN. “The creation of the ANPN,” she noted, "is a significant moment in that we now have the opportunity to build on the on-the-ground work happening all across the continent, to break the isolation which so many feel. I like to think about it going beyond training to peacebuilding, going to the root causes of violence. We must spotlight issues of minorities so that all can enjoy their freedom, human rights and security." Soweto-based Sipho Theys, program manager of the Action Support Centre and co-facilitator of the network, added that “it is never too late to start something good … but it has to be unique. How we structure the network will direct where we’re going. If we are people-centered, we will always be relevant.” Other ANPN Steering Committee members include Elavie Ndura (Burundi/USA), Bernard Agona (Kenya), Steve Sharra (Malawi), Laura Pollecut (South Africa), and a representative of Phaphama Initiatives life-skills training group (South Africa). The network will build on the present work by expanding the network to other countries and organizations, providing a significant resource to build peace in Africa by resisting militarism; supporting democracy, security, integrity in government, justice and human rights; and training in nonviolence and nonviolent direct action. South Sudanese trainer Moses Monday concluded: "I always think that the world in which we live today is in competition between those engaged in violence and those committed to nonviolence. In such kind of a race, it is important when we meet together to engage and inspire ourselves. That is why this network is important. We inspire and encourage one another to work together, no matter where we live. These networks are not the end in itself but a means to a nonviolent, peaceful and democratic society." First published in Waging Nonviolence