Monsanto and the parliamentary coup d’etat in Paraguay 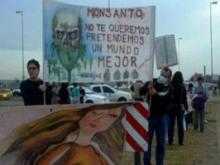 Monsanto brought GM into Paraguay in the same way that it has usually done elsewhere: by smuggling. And smuggling imposed GM soya, Monsanto soon achieved its legalisation by means of a powerful lobbying apparatus. And along with this soya came aerial and ground fumigation of glyphosate, and with that poisonous pesticide came diseases, contamination, malformation and deaths. The parliamentary coup d’etat occurred not long after (15-22 June 2012), effected to a large degree by Monsanto's agents at the Paraguayan parliament.

A month and a half after the parliamentary coup d’etat, the de facto president Federico Franco, violating Paraguay’s own environmental legislation, approved through a presidential decree the use of GM corn. At the same time, and into September, the use of GM corn and cotton seeds was also approved, by irregular presidential procedures.

The work of Monsanto’s lobby after the parliamentary coup d’etat didn’t have any more obstacles to face, having reached the presidential office, which has publicly defended, very vocally, GM seeds. These 'liberations' remain in force today, despite the protests and demands of environmentalists, small and medium-holding farmers and indigenous communities, amongst others.

The principal instigator of the parliamentary coup d’etat, the parties which dominate the National Congress, have maintained a close relationship with the transnational agriculture businesses for a long time, owing to the fact that those parties represent - and are largely composed of - agricultural entrepreneurs that have been using GM seeds illegally for a long time.

GM crops introduced by the de facto government will bring about the mass use of pesticides, especially glyphosate, of which the Paraguayan people already have a bitter experience: their use has been very damaging, even causing deaths, and it primarily affects indigenous communities and the families of small and medium-holding farmers.

These damages were exposed in scientific studies conducted by the Incarnation Regional Hospital, which showed the prevalence of cases of congenital malformations in pregnant women living less than a thousand metres from areas of pesticide fumigation, and also in those whose homes were being used to store the pesticides. The investigation by the paediatrician Stela Benitez Leite showed that the malformations increased in frequency if the people were living 'less than a kilometre' from the soya fields, or if they wore no protection when in the fumigated fields. The investigation took place in 2006 and 2007 and was published in the journal of the American Association of Paediatricians. The results show that at least 40% of the pregnant women exposed to glyphosate gave birth to children with congenital malformations.

During the government of Fernando Lugo, before the coup d’etat, the right-wing sector of the government, in charge of the Ministry of Agriculture and Livestock, had already tried to illegally 'liberate' Monsanto’s GM cotton seed Bollgard BT. The protests of farmers’ organisations and environmentalists saw that the National Service of Vegetable and Seed Quality and Sanitation (SENAVE) didn’t include the seed in their records, thus prohibiting its use.

Monsanto then began an aggressive campaign through the business sectors and the mass media closely linked to them to boost the use of GM seeds, and at the same time to provoke the fall of those in the government who had blocked the legal entry of GM seeds into the country. The illegal entry of seeds (by means of smuggling) cannot be prevented.

The media campaign was carried out by the Zuccolillo Group, whose principal shareholder is Aldo Zuccolillo, owner of the right-wing newspaper ABC Color - the most important in the country. Zuccolillo is also director of the Interamerican Press Society (SIP). The Zuccolillo Group is linked to Monsanto through its position as the principal Paraguayan partner of Cargill, one of the biggest transnational agribusinesses in the world. Cargill built one of the biggest bulk-carrier ports in Paraguay, Puerto Unión, over the River Paraguay in the metropolitan area of Asunción, without making any provision to make the river water - which supplies the city - drinkable.

The agricultural entrepreneurs and the right-wing Ministry of Agriculture at the time were also part of this campaign - a campaign which ended the day that Lugo's government was deposed and the vice-president Federico Franco, a liberal right-wing entrepreneur, assumed the presidency. The campaign had been successful; a lobbyist for GM seeds had gained power.