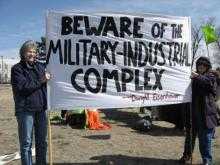 The Global Network (GN) began holding Keep Space for Peace Week events in 2001. Since then, early each October, we invite peace groups and church committees around the world to hold local actions to help build consciousness about how space is used to direct warfare on the planet.

This year between 6-13 October more than 75 local events were held in a dozen countries. The theme of Keep Space for Peace Week this year was “Satellites: the eyes, ears, and brains of modern warfare.” Whether it is drone warfare or shock and awe attacks, the U.S. Space Command “enables the war fighters” by the use of military satellites that guide the weapons systems to their targets in modern war making. Drones, which are killing innocent civilians over Afghanistan, Pakistan, and Yemen, could not perform their immoral killing function without the satellites, which control them. Our goal this year was to get the peace community to begin to see how expensive multi-million dollar satellites and the launch vehicles that put them into space should become part of the popular articulation against drone war making.

In the UK, the GN affiliate group Campaign for Nuclear Disarmament organized a 100-mile bicycle trip that connected the U.S. space warfare bases at Fylingdales and Menwith Hill in Yorkshire. The goal was to highlight their connections with US missile defense and the use of space technology. The cycle tour stopped in villages for nightly meetings and held signs and banners at various strategic places along the way.

In South Korea the Gangjeong villagers from Jeju Island, who have been nonviolently resisting construction of a Navy base in their community for the past six years, took our space week poster and translated it into Korean. They adapted it to include their call to stop the Navy base and took a banner size copy with them on a month-long grand march across South Korea that took these issues directly to the citizenry. During space week they held a protest at the South Korean Navy HQ where Global Network board member Sung-Hee Choi connected the Jeju Navy base to Obama’s “pivot” of foreign and military policy into the Asia-Pacific, as a plan to surround and control China. The missile defense systems on-board Navy Aegis destroyers are key elements in U.S. first-strike attack planning and would be ported on Jeju, which is only 350-miles from the Chinese coast.

In India, GN board member J. Narayana Rao organized space week events in seven different cities across his nation. The U.S. has successfully pulled India into the space warfare program as a hedge against China. The events in India made the connection between the costly and destabilizing space weapons program and their nation’s massive level of poverty.

Other events during space week included workday vigils in front of space weapons manufacturing installations run by Raytheon and Lockheed Martin. Many weekly peace vigils from Myrtle Beach, South Carolina to Montrose, California made the space weapons issue the theme of their protest.

Several communities across the U.S. also held showing of the award-winning documentary Pax-Americana & the Weaponization of Space. This video is now available on-line and is a must see for anyone wanting to get the bigger picture of U.S. plans for control and domination (on behalf of corporate globalization) by the use of space technology.

Each year the Women’s International League for Peace & Freedom (WILPF) co-sponsors Keep Space for Peace Week thanks to the dedication of Carol Urner. This year Carol went to Washington DC and dropped a space week flyer/poster at every congressional office. She also made sure that every WILPF local chapter in the U.S. received the poster as well.

This year activists in several cities bulk-ordered the posters and put them up around their community to help create more public awareness about Keep Space for Peace Week.

We will never be able to get a handle on the new arms race that is now underway in space until we create and nurture an international consciousness and constituency around this issue. Keep Space for Peace Week gives the 150 affiliates in the Global Network a great chance to work together around the world to bring this important message to the people.

You can find photos and reports from some of the actions in 2012 at http://www.space4peace.org