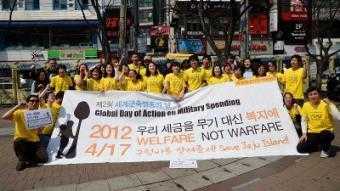 Through four months of fruitful outreach, fortifying and expanding the network of civil society groups that make up the Global Day on Military Spending (GDAMS) coalition, the second Global Day last Tuesday, 17 April, was a tremendous success worldwide. The International Peace Bureau (IPB) and the Institute for Policy Studies (IPS) were able to convince SIPRI to release their data on the same day of the global action in order to send a stronger message on the outrageous military spending which according to a report by SIPRI, for the year 2011 totalled $1.74 trillion.

Over 130 different actions took place in 42 countries worldwide. Many actions took place in Western Europe, including a high-level summit at the United Nations in Geneva with the High Representative for Disarmament Affairs. And there was a major increase in participation from groups in the Global South. In Africa, where military spending is on the rise amidst growing dissident people’s movements, events were held in Uganda, Cameroon, Kenya, South Africa, Sierra Leone and the Democratic Republic of the Congo. In South Asia, with India rising to become the world’s leading arms importer, activists are organizing on a major scale as the arms race between India and Pakistan escalates. Over 30 actions took place in villages and cities throughout Pakistan, including major rallies in the cities of Islamabad, Karachi and Lahore, eliciting participation from parliamentarians, and a hunger strike by noted activist Raja Jahangir Akhtar. In India there was also a mix of rural and urban activism to mark GDAMS, and in Bangladesh, activists met with a number of Members of Parliament, including the Deputy Speaker, to discuss disarmament both in the country and in the region.

In the US (country accounting for 41% of global spending) there were more than 50 actions. These actions stressed the key facts that: 1) 48% of all tax revenues go toward the military; 2) $1 billion spent on education, health care or green energy will create more jobs than $1 billion in military spending; and 3) the Aerospace and Defense industry pays on average less than half of the standard corporate tax rate. The Occupy movement joined in on the Global Day in Washington, D.C., Boston, Los Angeles, Oakland, Kansas City, Asheville, Raleigh and Greensboro, NC, New Paltz, NY, and Eugene, OR. Some of the actions included marches on defence contractors (“Occupy the Military-Industrial Complex”) in Washington, LA and Tucson, street theater in Montgomery, MD, rallies outside post offices in several cities, a large rally at City Hall in Philadelphia, and a massive march with over 1,000 participants from a broad network of groups in Boston.

“Almost every country with a military is on an insane path, spending more and more on missiles, aircraft, and guns, while the planet is in crisis,” said John Feffer, Co-Director of Foreign Policy In Focus, a project of the Institute for Policy Studies. “These countries should be confronting the real threats of climate change, hunger, disease, and oppression, not wasting taxpayers’ money on their military.” “We are not only talking about money”, added Colin Archer, Secretary-General of the International Peace Bureau. “The world is misusing some of its most brilliant brains, which are desperately needed to tackle issues like the energy crisis and the challenge of creating millions of new jobs”.

For reports of the actions please go to this link.
http://demilitarize.org/