The days pass so quickly here. On Tuesday 28th February I was needed to give interviews with a progressive Korean military publication who asked searching questions about how South Korea can protect itself from North Korea and China without US bases, what I think about South Korea getting nuclear weapons to protect itself from North Korea (this is something being seriously considered!) and why I was here. It was an opportunity to discuss the ever expanding US military presence in north-east Asia, what real security consists of and ways to stop proliferation. 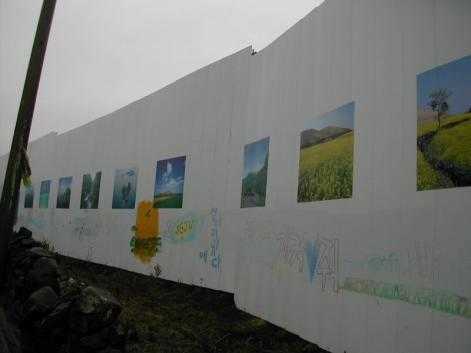 Walking back to the peace centre along the fence line destruction workers were painting over the villagers’ slogans and art with their own rather bland but professional scenes of the beautiful countryside around. It is part of the myth the Korean navy and Samsung are propagating - that this naval base can co-exist with the tourism in the area. But as it is the navy base that is destroying this beauty I am sure that very soon pictures of missiles and bombs will be added along with messages to point out the sad reality.

Later I attended the evening candle-lit vigil that is held in the village peace centre every evening if it is not being held at the base or outside the police station - though often these vigils are being held at all three places at once! The Gangjeong villagers certainly have stamina and can teach us a lot about regular and inclusive communication. The vigils are a regular that anyone can attend so they can catch up on what has been happening that day, who has been arrested, who released, what the latest political developments are, how people are feeling, to introduce new people and make plans. Taking turns at the mike they say whatever they want to share and most of them, men, women, young and old, sing a song too. It is very moving. The songs are often traditional ones adapted for the struggle and often seem to be made up on the spot. Everyone is appreciated, clapped and honoured. I was asked to speak about how I felt when swimming from the harbour to the rocks and when confronting the police, as I had been missed at the previous nights vigil, and I offered up a song too. Then a young mainland Korean woman, who had come to live in the village to support the struggle, led us all in a series of dances (a Korean style Zumba session) that she says is a kind of therapy - not only does everyone loosen up but it is hilarious and good fun.

I am writing this from a friend’s house in Seoul as I had been invited to talk to groups here. Yesterday I spent a very productive couple of hours with 10 of the lawyers from Minbyun - Lawyers for a Democratic Society - who have been giving valuable legal support to the villagers. They have taken out several law suits against the naval base project and against police for their violence. They wanted to hear about our legal strategies in the UK and especially about the legal arguments used by Trident Ploughshares. They were especially interested in the International Humanitarian Law arguments. I left them a copy of ’Trident on Trial’ and also ’Trident and International Law.’ They want to translate ’Trident on Trial’ into Korean!

A strategy session with around 7 of the Korean groups involved in the Save Jeju Campaign and based in Seoul was also fascinating and productive and I have a clearer idea now of what internationals can contribute to the struggle. Last evening there was a rock concert here in Seoul organised as a fund-raiser and again I was asked to speak and to encourage all the young folk to get to Gangjeong in the next few weeks as things are getting very critical. The political context is that President Lee Myung Bak’s announcement on 22nd February to enforce the nuclear base construction despite publicly reported planning irregularities on the layout of the harbour, and despite the massive 96% naval base budget cut for 2012, was followed by the prime minister stating that there will be no hesitation in repressing the opponents of the base. Despite these threats local villagers are still trying to recover possession of their sacred Gureombi rocks but each day more razor wire goes up cutting off more and more of the rocks from access by canoe. And each day villagers are arrested and we have just heard that five more police squadron units (another 250 anti-riot policemen) from the mainland will soon come to Jeju to ’control’ the protests. On top of that a Samsung dredging barge has started work today. (Should we all boycott Samsung and write to them telling them why?) Many National Intelligence Service agents (Korean CIA) are patrolling the area including the village itself and there are fears that the suppression and violence of the police will worsen.

I will be glad to get back to Jeju tomorrow to help support the direct action which is my main task here. But for now I must complete the follow-up work that always comes up after meetings!

But let me leave you with this cheery picture of 2 members of a local band outside the peace centre in Ganjeong. The man facing you with his gong is not only a great musician but also a real joker - he had the villagers in fits at the evening vigil - I only wish I could have understood what he was saying!

Don’t forget to call the Korean Embassy and let them know that Jeju does not want a naval base! The militarization of Jeju Island runs contrary to its designation as the “Island of World Peace.”