Is central India’s civil war a resource war over metals for arms? 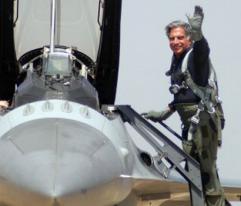 There is a lot of evidence that the arms trade is an epicentre of corruption, and that it fuels conflicts around the globe. Andrew Feinstein’s brilliant new book, The Shadow World (2011, review by Padel 2012) shows this clearly. Less scrutinized are the centrality of the arms industry to the world economy, the industry’s links with mining, and its outstanding greenhouse gas emissions. However much we limit our individual carbon footprints, will this make any difference unless we curtail our wars?

Since 2005, the tribal areas in central-eastern India have plunged into a ‘slow war’, between security forces and Maoists. Underlying this, and a key reason for Maoist recruitment in these areas, is the displacement of millions of adivasis (indigenous or tribal people) from their land and resource base. The leadership on both sides is non-tribal, but the foot-soldiers are mainly adivasis – on the Maoist side, motivated by outrage at multiple injustice, and on the security force side through the system of SPOs – adivasis recruited as ‘Special Police Officers’ for a small salary in an area where numbers of displaced unemployed are growing – a recipe for civil war. Malnourishment among adivasis and dalits, according to India’s official statistics on nutrition, stands at over 50%.

Links between India’s mining companies and arms manufacturers are well known. For example, Nalco (National Aluminium Company) has close links with military aircraft factories run by HAL (Hindustan Aeronautics Ltd), and Balco (Bharat Aluminium Company) has had a contract to supply India’s nuclear missile programme, probably inherited by Vedanta.1 In January 2007, an agreement was drawn up for Indo-Russian collaboration on BrahMos missiles capable of carrying nuclear warheads, aimed at selling ‘about 1,000 missiles in the near future to clients in India, Rusia and some friendly countries’.2 India’s President Abdul Kalam, who worked on his country’s nuclear missile programme, devotes space in his book India 2020 (Kalam and Rajan 1998) to emphasizing the importance of India developing aluminium-lithium alloys, to keep up with the arms race.

The extraordinary spate of new mining deals signed by the state governments of Orissa, Chhattisgarh and Jharkhand from 2000-2005 were accompanied by deals between India mining companies and international arms producers. Nothing symbolized this more potently than a photo on the front page of Indian newspapers on 8 February 2007 of Sir Ratan Tata, head of the Tata group, sitting for a flight in the cockpit of a F-16, grinning like a maniac. This was the emblem of a deal signed by Tata and HAL with Lockheed for manufacturing components for this plane, and came around the same time that Tata bought up Corus (British Steel), Landrover, and Jaguar.

Perhaps nothing defines the distinction between ‘developed’ and ‘developing country’ status more than the extent of a country’s arms industry: ‘developed countries’ are basically the key countries who have manufacture and sale of arms at the centre of their economy. So in the warped logic of global power and influence, perhaps India’s bid to raise itself in the global hierarchy through rapid expansion of its arms industry makes sense.

The trouble is, this comes at a terrible cost for thousands of villages, whose way of life has been basically in tune with nature since time began. Over 600 adivasi villages had been burnt by Salwa Judum (a tribal militia created to fight the Maoists in Bastar, south Chhattisgarh) within two years of its formation in mid-2005, creating at least 200,000 refugees. Bastar is (or was) India’s tribal heartland. Its Muria Gonds and other tribes had evolved a lifestyle based on long-term sustainability and extraordinary beauty. To those who knew these cultures, the atrocities taking place there over the last seven years are a descent into hell for those who least deserve it. A recent massacre at Sarkeguda village, near Bijapur (Dantewada District), has at least drawn wider attention to the situation whereby perpetrators in uniform commit appalling crimes with impunity, and villagers have no hope of getting justice. Nineteen adivasi villagers were killed on the night of 28 June, when about 800 armed police of the CRPF (Central Reserve Police Force) converged on an area between three villages, where a meeting was in progress about a forthcoming agricultural festival. CRPF sources claimed they were shot at, and six jawans were wounded (some say by friendly fire), and that some of the dead were ‘hardcore Maoists’ – as a result of which, Chhattisgarh’s Chief Minister and India’s Home Minister commended the CRPF involved for bravery. Civil rights groups and journalists contest every aspect, showing that these people had returned to villages close to a CRPF camp, that had been burnt by Salwa Judum and painstakingly rebuilt, and a high probability that cases registered against certain villagers were false.3

India’s Tribal Affairs Minister, Kishore Chandra Deo, has described this massacre as a ‘fake encounter’. It joins a woefully long list of well-documented fake encounters. In many ways, the Maoist-‘Operation Greenhunt’ conflict is a ‘false flag’ war, masking a war over resources. Maoists and security forces/mining companies share an ideology based on top-down power, sacrificing life and materialistic values: no-one imposed steel production more ruthlessly than Mao, and Bastar’s adivasis had managed to resist new iron-ore mines and steel plants with considerable success until Maoists undermined their traditional leadership.

Throughout central India, indigenous movements against new mines and metal factories, involving forced displacement and ecocide, are targeted on the grounds of Maoist infiltration. This is the case at Kalinganagar, where adivasis protesting a new Tata steel plant were shot dead in January 2006; in the Narayanpatna area of south Odisha, where an organisation called the Chasi Mulya Adivasi Sangha, orchestrating opposition to new mountain-top bauxite mines as well as mass takeovers of adivasi lands was viciously suppressed after Maoists publicly supported it; in the Saranda forest in south Jharkhand, where recent deals for new iron-ore mines were preceded by a mass invasion aimed at clearing out Maoists; in the vast Abhujmaar forest in Bastar, home to the Hill Mara Gonds, who have preserved a harmonious way of life shattered recently by an invasion of 3,000 CRPF, who reported several fatal encounters as they searched for Maoists hideouts; and in dozens of other key areas.

Khandadhara, a mountain range in north Odisha home to the Paudi Bhuiya tribe, is the site of an epic, though little-reported resource conflict: Paudi Bhuiya have been moved out of the forest in large numbers on the spurious grounds that their age-old practice of shifting cultivation destroys the forest, while a shady company called the Kalinga Commercial Corporation is already breaking production targets denuding mountains completely of their forest with iron and manganese mines, whose ore is already being exported in large quantities to China and South Korea (Mukherjee 2012).

In Kalinganagar and other contested sites, police often behave as a private army ensuring mining, construction and energy companies take possession of farmers’ lands. In an age of escalating conflicts worldwide, ‘mineral wealth’ becomes the touchstone of financial value, as the basic resource for waging war.

The irony is that villagers with cultivation systems based on highly developed principles of long-term sustainability are being displaced in the name of ‘development’. Can humans develop beyond the primitive stage we’re presently stuck at of ove-rexploiting Earth’s resources, and settling disputes through wars and atrocities?