135 full bows of prayers for peace at Destruction Gate

Trident Ploughshares member Angie Zelter is supporting villagers in their fight to stop the building of a US nuclear base on Jeju, the South Korean “Island of Peace”. The new base just 300-miles from the Chinese mainland will become a port for U.S. Navy Aegis destroyers fitted with the missile defence systems that are key elements in Pentagon first-strike attack planning. Gangjeong village and endangered soft-coral reefs will be destroyed to build the base. Here is Angie’s first report. 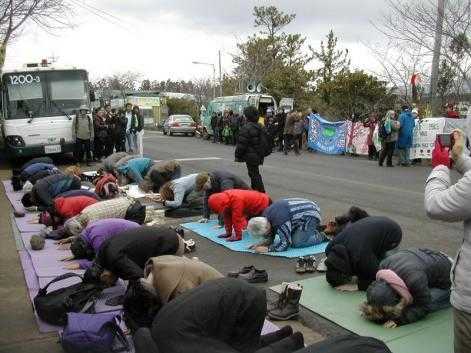 The villagers of Gangjeong have welcomed us with open arms. We are around 45 internationals from 12 different countries who have come in response to the village’s invitation and plea for support. I have never been in a village so united against a military base. There are flags and beautiful banners everywhere declaring this a village for peace and life. Art work and murals are along the road and now decorating the obscene wall going up around the construction site which they call the destruction site. These celebrate the natural beauty of the area especially the rare corals, dolphins and crabs in the sea and the fresh water springs and rich agricultural way of life of the area which is famous for its citrus fruit.

Today we took part in the Buddhist/Catholic prayer outside the main destruction gate - 135 full bows of prayers for peace. Later back at the village community centre, which is dominated by pictures of the nonviolent struggle and a display of dolls of the major village characters engaged in the resistance, we heard from the old people of the village - old men and women of 80 plus years who talk of their sorrow at the destruction of their coastline, which was so beautiful and is now being blasted to build a huge naval base for the US to build yet another of their military bases surrounding China. They also talk of the broken community life and divisions in the family caused by the 5 years of resistance, where so many villagers have been imprisoned. In the evening we heard from more villagers and through song and dance of the resistance and the Mayor spoke to us as did a former Governor of Jeju who was apologetic that he could do so little to stop the destruction. Young and old come together most evenings to sing and dance and plan their resistance together.

Yesterday we had been taken around the the Jeju April 3 Peace Park which had been established as a means of compensating Jeju communities for the damage and loss incurred in the April 3rd 1948 Incident. This history is crucial to understanding the villagers present anger and resistance. In brief, Jeju was fortified by the Japanese in the 2nd World War and 60,000 Jeju men were taken by force to Japan to work in their factories. When the Japanese flag was eventually taken down after the war it was immediately replaced by the US flag and the US military Government worked to ensure the division of north from south Korea which eventually led to the Korean War and continuing conflict. Jeju people refused to vote for this separation and became known as the ’red island’. When Jeju people’s demonstrations were halted by police killing 6 people and the following general strike was cruelly put down, some young people were arrested and tortured and this led to a small armed uprising which then enabled the US Military Government to order a tough crackdown operation. 4 months later over one ninth of the population had been killed (30,000 people), 84 villages razed to the ground and a scorched earth policy over the whole island which thousands becoming refugees in the mountains and which left the island traumatised. After this they were not allowed to talk about the massacre and it was not until 2005 that the Government of Korea officially reported on it and President Roh Mee-hyun apologised for the Korean Government’s part. (The US has never apologised nor has it been officially investigated. ) The President then declared the Island of Jeju an ’Island of Peace in order to sublimate the hurts of the Jeju incident with a spirit of reconciliation and make it a symbol of peace and human rights’ . The peace museum was then allowed to be built to record the testimonies and detail the historical record.

But it was only 2 years later that a deal was made with the US to build a military base on the island! The villagers are aware that if this base is built that other military bases are likely to follow in the planned future US war against China. They look at the ring of US bases around China and note that China does not have even one military base outside of China. They truly want peace and say you cannot have it by preparing for war. They want the present area now being destroyed for the military to be transformed into a peace park instead. Today we are holding a press conference outside the main gate of the military construction site and then a group of internationals will enter the base and try to reach the sacred Gureombi rocky site which is being prepared for blasting. There is so much more to tell you about but little time to spend at a computer .......... love Angie.