Action against BBVA during their AGM 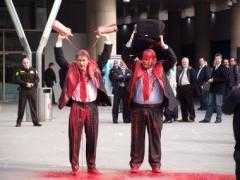 For a fifth consecutive year, on 16 March 2012, the Platform against the BBVA bank, carried out a nonviolent direct action during the company's annual shareholders' meeting. Five members of the Platform, who dressed up as business people, managed to elude the security personnel and police and covered themselves in red paint, simulating bloodshed, while shouting "BBVA murderers! Your money is taited with blood!" THe media who were covering the event had difficulty carrying out their work as the police prevent them from the filming.

By this action, the members of the Platform against BBVA denounced the lack of scruples of the bank in their financial work. manifested in activities such as investing in the arms industry, projects with huge environmental impact, and their responsibility in the financial crisis, as well as many other times. At the same time as the action, more than 100 people of the Social Movement Platform and Unions, held a protest against the bank outside the Euskalduna Palace, where the AGM was taking place. 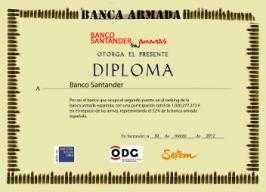 On Friday 30 March in Santander, SETEM, the Centre Delàs d’Estudis per la Pau (Study Centre for Peace) of Justícia i Pau (Justice and Peace) and the Observatorio de la Deuda en la Globalización (Observatory of Debt in Globalisation, ODG), representatives of the campaign “Banco Santander without arms” and a representative of the Movimiento de Afectados por las Represas en Brasil (Movement of People Affected by Dams in Brazil, MAB) spoke during the shareholders meeting of Santander. They denounced the unethical practices of the bank due to its relation with the arms trade and its responsibility for the social and environmental damage caused in the Brazilian Amazon.

The campaign “Banco Santander without arms” presented Santander with a diploma for being the second highest investor in the arms sector among the Spanish financial entities and revealed Santander’s important role in the production and commercialisation of arms around the globe. Its contribution of over 1000 million Euros in the last decade to the production and commercialisation of arms, which is directly responsible for human rights violations and millions of deaths throughout the world, was also denounced. Faced with this charge, Mr. Botín, head of the Santander Group, merely stated his personal disagreement and categorically denied the accusations, though without giving any argument to justify his words or proof to the contrary of the accusations.