16 people arrested in the Gureombi rock.

A protest high up in the air

[March 12] A protest high up in the air: 16 people including Benjamin Monnet, Kim Seri and Angie Zelter were arrested in the Gureombi rock.

I just came back about one hour ago from the Seogwipo police station to meet the arrested on March 12, including above three in the Gureombi rock. A long day again for many people here in the village. Four people including Dr. Song Kang-Ho have entered the Gureombi by kayaks from early dawn-around 5am and occupied the tetra pods site near the rock, which have also been used on March 7.

Among them, two people- Benjamin Monnet, a French activist and Kim Seri -climbed up to a crane that had drilled a large area of rock , which started in the afternoon.

“I could not stand any more of the crane destroying rocks. So I crawled underneath wire razor. Then a Daelim thug suddenly came to me and pushed me back toward that wire razor. As I tried to enter forward, another thug also pushed me. At the time I hurt in my left leg and left arm (She was limping when she walked in the police station in the night). One of them severely pressed my neck so when I was on the crane near for two hours later, I found my leg, arm, neck were all painful. But I could not really feel about my body condition when I ran toward the crane from the thugs from whom I wanted to escape. I was just desperate to stop the rock being destroyed. And I saw Benji who had been trying to protect me from such violence was very quickly running passing by me, already reaching to the top of crane before me. He helped me to climb up the crane then. (Benji was also pushed back by the thugs when he tried to protect Seri).

The two stayed on the top of crane near for two hours, shivering in coldness in thin swim suits. They were eventually arrested under the charge of ‘obstruction of business, by the policemen who flocked like crows underneath them. 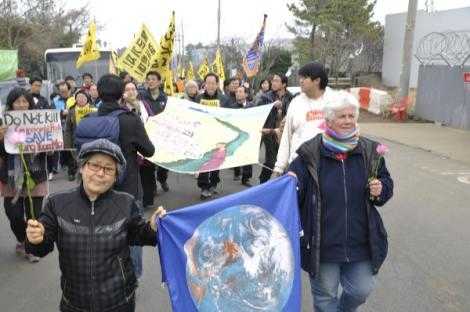 According to Seri and Mr. Lim Ho Young whom have gotten information by talk with the construction workers or one’s own research, the site the crane was drilling is where the rock bed is to be eventually blasted after being put with explosives for the formation of caisson-production area, the 2nd work area of 250 m length by 70m width size, with the use of 35 ton explosives. (Please imagine how large it is considering that the Gureombi rock is about 1.2 km whole one body.). In the 1st work area where 8 ton of explosives would be used for blast, another crane was working near the coast with strange equipments nearby it and yellow electric codes being laid in inside water. Is if for the blast of the rock bed underwater? Seri wondered.

But not only that... “I was happy today. How long it has been to see the whole Gureombi rock again. How beautiful it is to see from the top of crane.”

How beautiful Seri and Benjamin are today. For near two hours, thanks to them, the destruction of people’s Greombi could stop, to the joy of people who cheered for them!

In the nearby room where Seri was investigated, there was Angie Zelter who bravely cut the wire razor in front of policemen so that about 20 people could enter the Gureombi rock as people gathered into to the coast, risking dangerous files of tetra pods and pitched stone bank to protect the two amidst sun-set.

Though Angie was scared to climb down hanging onto a rope among the dangerous tetra pod files, Angie would later reply to the policemen that her name is ‘Save Gureombi from War Preparation.” And she would be charged of damage on property. Last time, her answer on her name was ‘ Save Gureombi for Peace against War.’ On Feb. 25, her name was ‘Save Jeju.’

Angie knew she would be arrested again only one day after her release. She has been arrested on March 9 when she has entered through a fence, along with about 30 people, breaking it with others including a pastor Lee Jeong-Hoon and Fr. Kim Jeong-Wook who would be imprisoned soon

Among the arrested today, there were two teenagers -one boy and a girl- who were eventually released hours later. Except for the two, 14 people were eventually carried to the Dongbu police station in the Jeju City to stay night there in its custody room. Some of them were arrested in front of construction gate where they protested against the police’s illegal arrest of people inside the Gureombi that is absolutely public space. Among the arrested, there was Mr. Song Chang-Wook who has been feeding himself only one meal a day since movie critic Yang Yoon-Mo’s fast.

There were many new faces today including a wife of a renowned photographer Lee Si-Woo. She was hurt her head when she crawled underneath a wire razor.

Thanks to Save Our Sea team who encouraged people to enter the Gureombi, despite the risk of dangerous files of tetra pods and pitched stone bank, about 50 people could enter to the Gureombi, though 16 people would be eventually arrested, surrounding the uniformed police line inside wire razor with their diverse costumes, talents and songs.

The Catholic Fathers held a mass near the port where people could watch what is happening inside the Gureombi. Fr. Moon-Kyun s climbed up to a light house, fluttering his sacred white robe in the wind. A little distant from it, more than 10 young Catholic fathers sat in a line, leading the mass in solemn mode.

By the sun-set, the whole Gureombi rock looked happy in long time again with many people cheering and singing there.

Destruction will go on tomorrow, too. Nobody knows how many arrests and imprisonments would happen tomorrow and coming days. The numbers of arrest since Jan. 2010 is now reaching almost 400 or highly likely more. Everyday people here have to endure early dawn siren by which many people have already been suffering for auditory hallucination, confrontation with police, physical and psychological risk etc. Still more and more people seem to come here. More and more people seem to have concern with people’s beloved Gureombi.

As the sun set, the young policemen also sought for their sleep, too. It is for those young people that we fight to inherit them this Peace Island so that they should not be a cannon fodder by a war base here.

It is told another 4 blasts happened today, too.