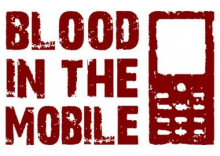 Coinciding with the celebration of the World Mobile Congress in Barcelona (Spain), several groups took action in order to raise awareness about coltan and its links with the electronics industry and the war in the Democratic Republic of Congo (DRC).1

The World Mobile Congress, celebrated between the 14th and 17th of February, which 50,000 people attended, filling up 98% of the hotels in the city, is the most popular event linked to the mobile phone industry in the world. The main actor behind such a large scale event is the GSMA, the organisation which represents the interests of the mobile phone industry.2 Although the aim of the congress was to “Lead the transformation”, none of the sessions addressed issues of corporate social responsibility linked to the question of coltan.

The issue of Coltan

The coveted coltan, whose name comes from the contraction of two minerals, niobium (columbite) and tantalite, is essential in the production of microprocessors, which are used in the majority of electronic goods (mobiles, computers, DVDs etc).3 The world reserves of this mineral are found in various countries: Australia (10% of known global reserves), Brazil (5%), Thailand (5%), although these amounts vary according to different sources. 4 The region of the Great Lakes in Africa, where the DRC is, is home to 80% of the global reserves. However, the high cost of exploitation in some of these countries and the budding exploitation in others means that a significant proportion of global extraction of coltan is concentrated in the DRC.

The exploitation of coltan in the DRC is especially problematic for its links with the armed conflict in the country. As is the case with blood diamonds, the same can be said of uncontrolled extraction of coltan, which finances the main actors of the armed conflict in the DRC (the army, government, the different Mai-Mai militias and the Rwandan armed group FDLR). Even though it was not one of the trigger factors for the armed conflicts in this country, the wealth gained from its exploitation contributes to making the conflict last longer, as the exploitation and illegal selling of this mineral creates new mechanisms for financing the war: people who exploit the mineral in the mines, those who transport it, the militias who protect and guard mines, sectors of the Army who extort money from the workers and the businessmen who buy the mineral, the armed groups who control vast territories and set the taxes for the exploitation and transport of the mineral...
The large coltan chain ending with the electronic products reveals a chain with several links to war profiteers; whilst some mining companies operate directly in the Democratic Republic of Congo,5 the neighbouring countries, especially Rwanda, Uganda and Burundi, have managed to legalise the exportation of coltan to eastern Europe, by stating that the mineral comes from their respective countries. In eastern Europe they transform the coltan into tantalum capacitors or other devices. Along the production chain, mobile phone companies (Nokia, Sony Erikson, Samsung, RIM (Blackberry), LG, etc) or other electronic good companies (Toshiba, Panasonic, Nintendo, Sharp, Canon, ScanDisc, Acer, Apple, IBM...)6 insert capacitors in their products. In the case of mobile phones it is particularly serious because at the end of the product chain, the phone companies (Vodafone, Orange, Movistar, etc) give mobiles free to their customers as though they did not cost anything. None of these companies are worried about certifying the origin of the coltan they are using, whilst the national governments are reluctant to address the problem.7

In order to raise awareness about the issue of uncontrolled extraction in the DRC, and the irresponsible consumption of electrical goods throughout the world, various groups have joined forces, coinciding with the celebration of the World Mobile Congress in Barcelona.
In order to raise awareness and give an in-depth explanation of the issue, the Xarxa d'Entitats per la República Democràtica del Congo (Network of bodies for the Democratic Republic of Congo) organised the screening of the documentary “Blood in the Mobile”, which traces the origin of coltan and questions the responsibility of Nokia, because the don't control their supply chain.8 Coinciding with the Mobiles Congress and for several weeks after, the documentary will be shown in ten cities in the region. Various protests have been organised, as a performance, with the displaying of a banner with the motto “Free mobile? No to blood mobiles” on the front of the building where the World Mobile Congress was held. Stickers were also edited with the word “coltan” and a danger sign in the “A”. These were placed near the Congress building, telephone adverts and nearby metro stops, in order to show the congress participants that there does exist concern over this issue.

Finally, the Jane Goodall Institue Spain, via the Mobilitza’t per la selva10 campaign, demonstrated mobile recycling systems as a proposal for responsible consumption, which avoids a level of coltan extraction which is dangerous to the local environment. Although the joint actions could have had a greater impact on public awareness, the joint efforts led to some of the media addressing this issue.11 The majority of the actions taken were successful, and given that the next World Mobile Congress will be held in Barcelona, many of the organisations will maintain their level of commitment to these demonstrations, so as to inform others about the subject and to demand that the Congress, and the major businesses participating in this congress, define responsible extraction policies which do not further worsen the armed conflict in the DRCongo.