New in the WRI webshop

This anthology includes contributions by women conscientious objectors and activists from Britain, Colombia, Eritrea, Israel, Paraguay, South Korea, Turkey, and the USA, plus documents and state­ments. 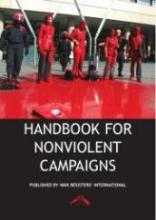 Social change doesn't just happen. It's the result of the work of committed people striving for a world of justice and peace. This work gestates in groups or cells of activists, in discussions, in training sessions, in reflecting on previous experiences, in planning, in experimenting and in learning from others. Preparing ourselves for our work for social justice is key to its success.
There is no definitive recipe for successful nonviolent actions and campaigns. This handbook, however, is a series of resources that can inspire and support your own work, especially if you adapt the resources to your own needs and context.
This handbook has been a collaborative effort of people working in nonviolence within the WRI network from Australia, Belgium, Britain, Colombia, Chile, Germany, Italy, Israel, South Korea, Scandinavia, Spain, Turkey, and the USA.

War Resisters' International offers a range of merchandise via its webshop. These and many other books can be ordered online — and some are even available for reading online or downloading as PDF.