Militarism All Over Schools in Turkey

Schools provide fertile ground for militarism: there is a captive audience, a comprehensive mandate, a hierarchical structure, and a clear power differential between students and professionals. Schools can easily be turned into paramilitary institutions.
Militarism is not transmitted or sustained by direct contact with the military. Rather, schools and other civilian institutions help militarism permeate daily practices and belief systems. Unlike mandatory military service, schools are very systematic and persistent: mandatory schooling can reach almost all areas and almost all children (both boys and girls), and for a very long time. Schools can deliver militarism at a young age, as early as 5 or 6.

School as a boot camp

A typical school has the components of militarism: domination, submission, discipline and violence. Violence toward students produces violence among students, and then student violence is used to justify institutional violence in the form of militarism.

A typical school in Turkey provides a wide variety of militaristic experiences. Some experiences appear to be less militaristic than others but together they form a militaristic climate. School life is supposed to be “orderly” and “disciplined”: Students are expected to follow military-style rules and routines. If they do not, they get into trouble.

School day begins with students gathering outside the school. Students do not simply walk in. Students from each classroom form a line or rank, and wait until their turn comes to enter the school. The justification for this practice is simple: schools are crowded. Students need to be controlled to avoid chaos.

Inside the school, flags and symbols of nationalism are everywhere. Kings and their conquests are glorified on walls. Commemorations are common and they are either about military victories or performed in military style. A typical school has very little to remind students of peace, non-violence and youthfulness. 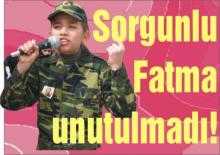 Physical education is where military order – forming a rank, walking in unison, etc – is taught. From early on, students learn to assume the “position of attention” as soon as it is called for. A typical student assumes the “position of attention” countless times in elementary and high school.
Students are just like foot soldiers. They can be “at ease” when adults are not around. Students are expected to be respectful, and respect begins with submission. Students stand up when a teacher walks in. The curriculum emphasises duties and obligations much more than rights and freedoms. Overall, the curriculum now is less nationalistic and discriminatory, but daily practices have a long way to go.

Ceremonies are important for militarism. School ceremonies help militarism grow. School week in Turkey opens and ends with a ceremony. In the opening ceremony the flag is raised and the national anthem is sung. In nationalist eyes, this is a sacred ritual. Everybody has to assume “position of attention”. Students often get scolded, humiliated or disciplined for not being “solemn” during the ceremony. In elementary schools each day begins with an archaic nationalist pledge.

Students are also expected to participate in certain official ceremonies outside of the school. On various occasions students were asked to wear a military uniform and hold a weapon. During Police Week it is common to see children in police uniforms. Children’s Day (April 23) is perhaps the most conflicted event. In every city, an official event is organised in a stadium and the event is very militaristic. The degree of militarism depends on the location and the political climate in the country.

Militarism needs conflict. Open conflict is best because it justifies the war machine. If martyrdom is embraced by tradition and propagated in schools, casualties can also fuel militarism.
The Republic of Turkey was founded after the War of Liberation, and martyrdom has been an element of the nationalist ideology ever since. With time, martyrdom has become a legitimization tool for the Armed Forces. Now, martyrdom is a versatile tool for politicians who want to to justify violence and its natural outcome, death. Schools get their share, too.

The state apparatus has been fighting with the Kurdish Workers Party (PKK) since the mid-80s. As dead bodies piled up, martyrdom was used to glorify death, thereby legitimising the ongoing violence. In the last decade massive public relations campaigns were launched to fuel nationalism. One of them was the co-ordinated effort to commemorate the Battle of Gallipoli, often called the Çanakkale Victory in Turkey. This was not an ordinary battle. It was a war of attrition in which thousands of soldiers on both sides had to endure extreme conditions for months. Many died of hunger, disease or when they fell into open air latrines (trench toilets). But the commemorations focused on martyrdom and victory. 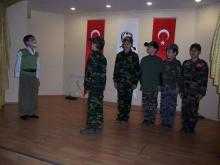 Militaristic school ceremonies were organised on the day associated with the victory (18 March 1915). Many schools organised trips to Gelibolu (Gallipoli) to commemorate the victory and pay homage to the martyrs. Soon this was transformed into a continuous pilgrimage. Huge numbers of students and adults were transported to Gelibolu. The message was clear: we are a strong nation and even the mightiest power cannot conquer us. We are all ready to fight and to die, if necessary.

The effort to polarise public opinion continued. During a demonstration in Mersin in March 2005, two youths were handed a flag, which they quickly destroyed. This was portrayed in the media as desecrationof the “Turkish” flag by Kurds. This turned out to be a setup but the scenario worked. Soon flags started appearing everywhere, including schools. Schools were infused with more signs of nationalism and militarism. About two years later, another commemoration was instituted: the day when the national anthem was adopted in 1921 was to be commemorated. Now a militaristic commemoration is held in every school on 12 March.

Co-ordinated efforts to glorify martyrdom and to pump up nationalism still continue. In recent years commemorations have been held in schools for the martyrs of the Battle of Sarıkamış (December 1914-January 1915), another war of attrition. 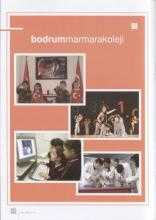 Private schools in Turkey are often portrayed as model schools. Private schools are not controlled by the state and therefore it is assumed that they are less militaristic. This is certainly not true. Many private schools also organised pilgrimages to Gelibolu. A very expensive private school in Bodrum organised an event where pre-school students were dressed in military uniforms or flag dresses. 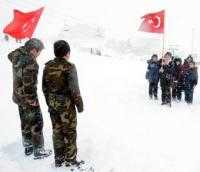 Last year a private school in Kayseri organised a special trip to Mount Erciyes, where students in uniforms re-enacted a battle during a snowstorm. Local authories (education, police, and military) and media were present. Also invited were the director and the leading actor of a film glorifying child martyrs. These children supplied ammunition to troops during WWI and afterwards froze to death in a blizzard.

The head of the Provincial Education Directorate was very happy. The ceremony, he noted, taught children “love for the homeland, the flag and the country”.

What’s in a name?

Militarism thrives on hatred. Public areas can be used to mark a conflict and instill in daily life elements that remind everyone of conflict and hatred. As institutions central to public life, schools can be used as markers of conflict and serve the function of perpetuating hatred and violence.
That is exactly what has happened in Turkey. Many schools are now named after a martyr. This transformation of schools into tombstones was ruthless: the country is now covered with schools named after martyrs. Some other public areas (such as parks) and institutions (such as health centres) also became targets of this sort of militarism. 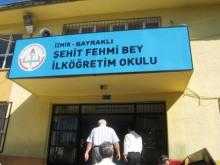 Some school names defy imagination: Martyrs Elementary School or Martyr Teachers Elementary School. In some cases existing school names were changed. In 2007, for instance, the Provincial Education Directorate of Kars changed the names of seven village schools with a single decision. The schools were named after the village they were located in. These schools now carry a name that has nothing to do with the village or the region. The schools have been turned into sites marking a never-ending conflict. 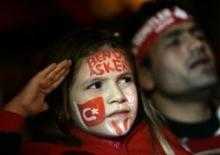 The author, Serdar M. Değirmencioğlu, can be contacted at serdardegirmencioglu [at] @gmail.com