On 1 December 2009, hundreds of Israeli high school headteachers gathered for a special conference on “preparation for meaningful service in the Israel Defence Forces”, with the Chief of Staff of the Israeli military as the keynote speaker. Also present were Israel’s Minister of Education and many senior officials from the Ministries of Education and Defence and senior military officers.[1]

This event is but one example of a consistent trend of increased military presence in Israeli high schools in recent years. Since 1999, soldiers in uniform, whose job is to encourage pupils to enlist and to provide them with information (often misleading) about the military, have been stationed in almost every high school in Israel as part of a mandatory curriculum of preparation for military service. An increasing number of educational programmes and initiatives involve sending senior and middle-rank military officers to high schools to address pupils and teachers.[2]

Now, there seems to be a similar trend in many countries. Military recruiters have greater access to schools in Europe and North America in recent years than they used to, and military fairs and public events have recently started targeting children as an audience. This is often the result of the abolition of conscription: the military has to seek recruits, and uses its resources and political influence to gain greater access to them.

However, on closer inspection, the Israeli case is different. Israel has universal conscription. The military, despite complaints to the contrary, has more conscripts than it can handle. Increasing the enlistment rate, which has been declining for more than two decades, and “combating draft evasion” are indeed cited as the main aims of the recent surge in military presence in schools, but this aim is not viewed in Israel as strictly a military aim. On the contrary, Israel’s current Minister of Education, Gideon Sa’ar, has defined increasing the enlistment rate as a central aim of the educational system, and has announced a system of financial bonuses to reward schools and teachers for increasing enlistment rates, especially to combat units, among their former students.[3] Enlistment is considered a social objective, and indeed a means for promoting youths from underprivileged communities, for “integrating them into the Israeli society” (in fact, military service is a central generator of social inequality, especially gender, class and ethnic inequality, in Israel, but that is a matter for a separate discussion). 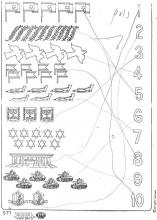 The Israeli educational system is willingly and eagerly co-operating with the military on all levels and in many ways. This includes local initiatives for sending elementary school pupils to mock military training or to field trips focusing on past battlefields, and the ubiquitous practice, in schools and especially kindergartens, collecting gift packages to send to soldiers (these are often delivered in special ceremonies with the soldiers present, and the occasional weapons display too).[4] New Profile has also received reports of school counsellors passing all confidential information they gather about pupils to the military. Teachers try to convince their pupils of the importance of the curricular subjects they teach by presenting them as improving the pupils’ chances of serving in particular military units (physical education would get one to a combat unit; Arabic – to the intelligence corps). Indeed, these links are often formally sanctioned by the Ministry of Education, as several curricular subjects are officially part of the preparation for military service curriculum.[5]

Many of the pupils themselves accept this perspective too. Private courses for physical and mental preparation to combat service are a thriving industry. Being accepted to an elite military unit is considered a status symbol for an Israeli teenager (especially among men). These young people accept the message sent by the educational system, and by society at large, that being a soldier is a natural stage in a person’s life, that military service is the exclusive, privileged, way of social participation, the one and only social duty a person has, and the only act in one’s life that really counts. Belligerent approaches to the many conflicts in which Israel keeps itself involved come naturally with all that. Young Israelis are brought up to believe that military might is the obvious solution to any problem, and that Palestinians and Arabs in general are to be thought of only as targets of military action.

So military presence in Israeli schools is not so much about military recruitment. It is about maintaining a social order. It is not surprising, then, that the little counter-recruitment work we in New Profile and others are doing is often perceived as high treason. New Profile thus has the honour of being the only organisation in Israel whose activists are officially banned from entering schools and addressing pupils. Nevertheless, we also identify growing resentment, at least in some circles, towards some of the more extreme forms of military presence in schools, which are perceived as excessive. Opposition to the militarisation of education in Israel is also developing among youths and educators, despite the many formal and informal penalties they have to endure for opposing it. Perhaps these can create an opening for effective counter-recruitment work in Israel in the future.