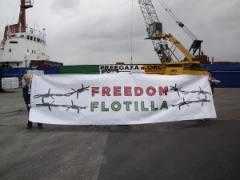 The illegal blockade of Gaza has been condemned by most major international actors. The horrible consequences of this brutal violation of humanitarian law are unacceptable from every point of view. One and a half million people interned on the small strip (45 square km) between Israel, the Mediterranean, and Egypt. The blockade has reduced the transport of goods to and from Gaza by 80%.

During the European Social Forum in September 2008, a small group of activists in a cafe shared some bottles of beer and discussed how to lift the blockade of Gaza. They wanted an initiative to move from words to deeds. Tired of nice speeches and words of solidarity, they began planning how to end the embargo. Inspired by the Swedish initiative “Ship to Bosnia”, in which a ship carried 108 containers and a fire truck to the war-stricken Bosnia and Herzegovina in 1995, and the ongoing ”Free Gaza Movement”, they wanted to do something large-scale to lift the sanctions and help the victims in Gaza. The main idea was to fill ships with goods and famous people and then sail to Gaza. Everyone understood that the idea was crazy. One of the initiators, Stellan Vinthagen, later said: “We all knew it would be impossible; that was why we had to do it.”
In the following December and January Israel launched a full-scale war against Gaza, and 1400 were killed. The majority of victims were civilians and the Israeli Prime Minister told the media that the military forces “hit their intended targets”. The war made the plans for ships to Gaza more urgent than ever. The situation in Gaza deteriorated day by day and neither the EU, the USA, nor the UN presented anything but mild criticisms of the belligerent Israeli policy.

From that beer-chat during the European Social Forum the idea started to grow, and soon more people and organisations took part in the discussions. Through contacts in Sweden, Greece and Turkey a coalition of civil society actors from several countries was formed later in 2009. Traditional mobilising, organising, and formulation of strategies picked up speed in the winter of 2009-2010. They collected money, bought ships, and planned to sail to Gaza with medical supplies, building materials and other goods needed. Through contacts with Palestinian Non-Governmental Organisations (PNGOs) in Gaza, the coalition of The Turkish Human Rights and Emergency Fund IHH, the European Campaign to End the Siege of Gaza (ECESG), the Free Gaza Movement, Ship to Gaza Greece, and Ship to Gaza Sweden grew into an international movement. The flotilla was ready to sail in May 2010.

Traditional Israeli lobby groups initiated a discussion in the mass media claiming that this was badly disguised support of the “terrorist organisation” Hamas. Remember Hamas won the free and fair elections in Palestine in 2006, but Israel and the US gave weapons and other forms of support to Fatah (who lost the elections) to launch a war and defeat Hamas. Fatah managed to take control on the West Bank, but not Gaza. Hamas were labelled “terrorists” and all so-called “democratic voices” in the world either kept silent or actively supported the fight against the winners of the democratic elections. These are probably the most stupid acts of commission and omission by western states and civil society actors in the Middle East since the crusades!

The organisers of the Freedom Flotilla had a declared policy of nonviolence and they promised to do their best to reach the shores of Gaza. Representatives of the Israeli government said they would use any means necessary to prevent the ships from reaching Gaza and ordered the Israeli Occupation Forces (IOF) to stop any ship trying to reach Gaza.

The Freedom Flotilla created a classic dilemma for the Israeli government. They had two choices: let the ships reach Gaza and hence end the blockade, or use force to stop peaceful activists. The first alternative would be a direct victory for the Flotilla - in practice lifting the blockade. The second alternative would show the true and grim and brutal policy of the government and the IOF. Preventing humanitarian assistance to people who suffer is difficult to justify. They did their best to blame the activists as ”terrorists” or ”supporters of terrorists”, but the conclusion is that the Israeli state lost a lot of support and was blamed by former allies worldwide. The attack on the flotilla escalated quickly when commandos entered the ships and killed nine unarmed activists. IOF confiscated almost all photos, videos and equipment for recording what happened. Even journalists on board lost their computers, cameras etc. The ships were still in international waters when they were attacked and most experts on international law agree that the attack was illegal.
Most mainstream international media covered the flotilla as they left harbour in Athens and Malta. But when the IOF started the raid, they jammed all communication and very soon the activists were out of touch with the rest of the world. The ships were taken to the harbour of the Israeli city Ashdod and all activists imprisoned. For the next two-three days Israeli authorities had a monopoly on all information about the confrontation. They used that opportunity to present their own version of the story. When they started to release their prisoners, the other stories came out. That soldiers had opened fire as they entered the ships from helicopters, that some of those killed were shot at close range, etc. Partly due to the time factor, these stories never got the same attention as the Israeli version of what happened. Control of information to the media for the first 48 hours proved to be important for what sort of memories many have of the confrontation.
All investigations, except those set up by Israelis themselves, concluded with criticism - usually condemnation - of the IOF and/or the Israeli government.

The Flotilla and the attack on it increased the international pressure on Israel to lift the blockade. And they did to some degree. They have raised the amount of supplies from 20% to 35% of the pre-blockade level. Hamas West Bank parliamentarian Aziz Dweik concluded: "The Gaza flotilla has done more for Gaza than 10,000 rockets."

2011 - New strategies from both sides

For 2011 the organisers once again planned a Freedom Flotilla. Since last year the political context in the region had changed a lot. ”The Arab Spring” had removed regimes and empowered people in many parts of Northern Africa and the Middle East. The Freedom Flotilla 2.0 attached the slogan ”Stay Human” to their logos and banners. The border between Gaza and Egypt had been open for some more goods and people, but still with serious limitations.

More organisations joined the Flotilla, and to do their utmost to avoid violence and deadly clashes they put more emphasis on nonviolence training. All participants had to sign a declaration where they promised not to use violence in any situation. Prior to departure, practical training took place in several countries and in the ports of departure.

Much of the planning focused on how to act if, or rather when, the IOF stopped the ships. Part of that was how to document what was happening and get pictures and videos out from the ships under siege. A number of creative techniques were tested and planned for. Another part of the preparation focused on how still to have ships move towards Gaza even when the soldiers came on board. Many different technical options were discussed and planned for.

Not too surprisingly, the Israeli authorities had changed their strategy as well. Their main goal this time was to prevent the ships from leaving their last ports. They managed to put sufficient pressure on the Greek government to create a bureaucratic mess of security checks and inspections. Greek harbour authorities created a minor hell with paperwork, inspections, and when they had no more means to delay departure they forbade all ships going to Gaza from leaving the harbour. All captains got the following statement:

Pursuant to a decision by the Minister of Citizen Protection Mr. C. Papoutsis, the departure of ships with Greek and foreign flags from Greek ports to the maritime area of Gaza has been prohibited today.
By orders of the Hellenic Coast Guard Head Quarters to all local Hellenic Coast Guard Authorities, all appropriate measures are taken for the implementation of the said decision.
As it is known, the Hellenic Coast Guard local Authorities have already been instructed to submit to ships Masters of ships of any flag the relevant notice to mariners that designates the area of maritime blockade by Israel.
More specifically, for ships flying the Greek flag, relevant entries shall be made in the ships logbook together with the reception of the above mentioned notice to mariners as well as with the communication by the Ministry of Foreign Affairs, dated 22 June 2011.
Furthermore, the broader maritime area of eastern Mediterranean will be continuously monitored by electronic means for tracking, where applicable, the movements of the ships allegedly participating in such campaign.
Finally, police controls of passengers and crews are conducted while there is cooperation with local police and customs Authorities for rigorous controls on issues of their competence.

Such an ”order” has no base in International Maritime Law and probably not in domestic Greek legislation either.

In addition the Greek government prohibited deliveries to the flotilla. In an email dated 5 July, the Swiss cement supplier Interbulk notified the organisers of the Freedom Flotilla that it would not go through with its sale of 25,200 Euro worth of cement, for which it had already signed a contract and received payment. The company was citing the Greek government’s prohibition of any maritime traffic, regardless of flag, from Greek ports to Gaza. A company representative wrote:

“Due to Force Majeure we cannot deliver the cement, and we will therefore repay the 25,200 Euro which we had collected as advance payment back into your account.”

The Greek government’s decision to forbid European companies from conducting business with humanitarian grassroots movements like Freedom Flotilla is obviously a result of the pressure from the Israeli and/or US government(s). This is of course completely reprehensible in any democratic state governed by law.

At a summit in Jerusalem on 11July Israeli President Peres thanked Greece for thwarting the Gaza-bound Flotilla.

As this text is written, most of the ships are still in Greek harbours waiting for the possibility of going to Gaza.

The Freedom Flotilla has challenged the Israeli blockade of Gaza more than any other effort since the blockade started. After the 2010 flotilla Israel was heavily criticised worldwide and forced to accept some more goods being transported to Gaza. The nonviolent dilemma action improved the situation in Gaza even if they did not managed to lift the blockade.

In 2011 the Israeli government successfully used ”behind the scenes” diplomacy and political pressure to prevent the ships from leaving Greece. Most probably they got help from the US which played a crucial role in the negotiations with the IMF regarding the need for loans and other forms of financial assistance for the bankrupt Greek economy. By having the Greek authorities playing on their side, the Israeli government in reality managed to outsource the blockade of Gaza to the European Union. This strategy managed to reduce the focus on Israel and, in the short run, made the Freedom Flotilla 2011 look like a failure.

Future Flotillas to Gaza will need to develop a strategy to counter preventive action by the states of departure. This should be possible - both against prohibitions on the boats sailing and the prohibition on supplies of material.