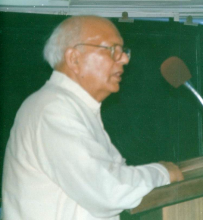 Devi Prasad, WRI's General Secretary from 1962-1972 and chairperson 1973-1975, died on 1 June in Delhi. An artist and potter, Devi graduated from Rabindranath Tagore's Shantiniketan before moving to Sevagram where he worked with Gandhi from 1942 to 1947. Post-India's independence, he remained active in the Gandhian movement, especially in the field of education.

For his first two years in the WRI office, Devi was Joint Secretary with Tony Smythe and their Conscription: A World Survey, was the first really systematic study of compulsory military service and resistance to it around the world. Devi was fascinated by the Western tradition of conscientious objection, but also challenged WRI to grow beyond this and embrace non-Western approaches to nonviolent action, as illustrated by the title of the 1969 Triennial "Liberation and Revolution: Gandhi's challenge" - held in Gandhi Centenary Year - and by subsequent debates around nonviolent revolution (the 1972 Lakey and 1975 Randle manifestos) and also critiques of Western perspectives on "development".

Devi's period as General Secretary was, of course, dominated by the Vietnam war, where radical war resistance was raising the issue of the deeper need for nonviolent social revolution - It also coincided with the 1968 Soviet military intervention in Czechoslovakia, where WRI organised a direct action project with activists traveling to several Warsaw Pact capital cities to protest. In 1971, WRI and Peace News launched an even more ambitious nonviolent direct action project, Operation Omega to Bangladesh, to challenge the Pakistani blockade of the future Bangladesh.

The sudden death of his first wife, Janneke, left him bringing up his sons Sunand and Udayan and his daughter Ammani while facing the demands of working in the WRI office.

Devi's subsequent involvement in WRI included a brief period as chairperson and a longer involvement as a council member. He married again, and in 1983 returned to India from where he promoted the 1985-86 Triennial conference, Resistance and Reconstruction: the Power of Nonviolence, in the Swaraj Ashram, Vedchhi, Gujrat, India, and his detailed history of WRI from 1921-1974, War is a Crime against Humanity: The Story of the War Resisters' International.

These bald details cannot convey what we most valued about Devi: his encouragement of youth, and his steady presence offering reflectiveness, a continual reference to basics of nonviolence, and his habitual good-humoured charm.

I had some great contact with Devi on the WRI council. He was such a kind and thoughful man. He came to New Mexico when I was working for WRL there and spoke on nonviolence. I set up a meeting with Resis Lopez Tijernia, then a miltant chicano leader to talk about nonviolence and Gandhi. They spoke about an hour but both listened very closely to one another and Devi was so respectful of their struggle for land grants.
When I was in India for the Triennial whatever year that was Devi and his wife were gracious hosts in New Delhi. She took me to visit day cares and early education centers and had a great influence in my life as an early childhood educator.
Thank you Devi for your wonderful life!