The Ministry of Defence of Britain released the numbers of conscientious objection applications since 2001, following a Freedom of Information request. According to the information provided by the MOD, there have in total been nine CO applications from 2001 until 2010, of which six have been successful. Between 1990 and 2000, 13 Royal Navy personnel and one soldier applied for conscientious objector status, a separate Freedom of Information response shows. 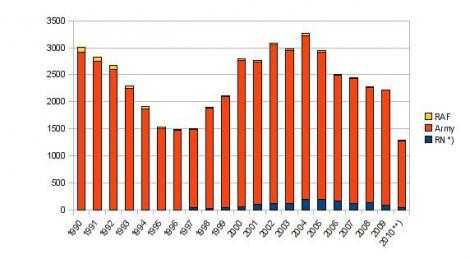 However, the numbers do not add up with an earlier Freedom of Information request by WRI. On 17 September 2007, the MOD said that there had been in total six CO applications between 2000 and 2007 (3 RAF, 3 Navy), while according to the detailed statistics provided in response to the new FoI request there were 3-4 Navy and 4 RAF applications in the same time. In March 2007, the MoD said in response to yet another FoI request that there had been in total 4 CO applications, all of which from the RAF.

Another two Freedom of Information requests concerned the statistics on AWOL and desertion between 1990 and 2010. According to these, there has been a clear increase of AWOL figures over almost all three forces in the years 2000-2005 (the figures for 2010 only cover about half of the year).