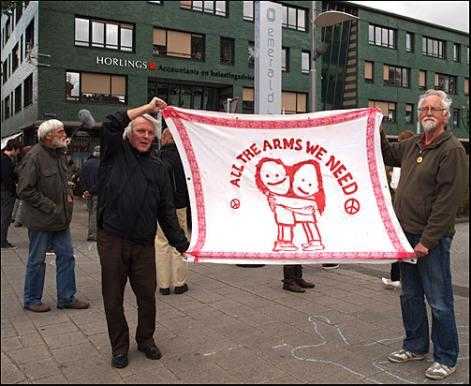 On 26 May, about 35 activists of the Campagne tegen Wapenhandel gathered at the main entrance of the Amsterdam Okura Hotel to “unwelcome” the shareholders of the second-biggest European defence company, EADS. Banners read “Stop arming Libya” and “Stop arms trade” and also the classics “All the arms we need” (painted on mum’s embroidered tablecloth) and “One man’s bread is another man’s dead”. Judging from the size of the cars in which the EADS officials were arriving, they earned more than just bread by selling their planes, missiles and drones. Last year when activists visited the shareholders meeting, they were amazed to find that although just one quarter of EADS’s production was military, all the video screens in the meeting hall proudly showed rockets attacking and planes bombing. Apparently that was what the EADS communication department considered as the most attractive products to display.

As the defence industry gets more Europeanised, so also do the peace activists. The first time Campagne tegen Wapenhandel spoiled the annual party of the EADS shareholders was in 2006, when we were accompanied by peace activists from Vredesactie Belgium. This year the international representation came from Germany. Activists from Deutsche Friedensgesellschaft - Vereinigte KriegsdienstgegnerInnen are the happy owners of the smallest possible amount of EADS shares, and Dutch shareholder law gives even the smallest shareholder the right to ask questions to the CEOs of a billion euro company. While the activists outside were animated by the Rhythm of Resistanz Sambaband, and entertained themselves (and the police) by throwing mock mines on the driveway to the hotel car park, our critical shareholders arrived in style – by bike taxi. Once inside (it took some time to convince Okura Security that not all shareholders drive Mercedes) they were able to ask questions on arms transfers to Libya, Saudi Arabia, Kazakhstan and China, and on the production of nuclear weapons and the use of depleted uranium. Although the answers were not impressive, it was an ideal exposure of the reality behind the annual profit graphs.