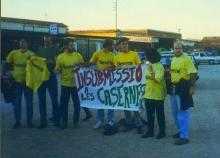 With the end of conscription in Spain, a law to depenalise violations of the laws on obligatory military service and substitute service was passed, and Óscar Cervera García was released from prison on 25 May 2002, after serving part of his sentence. According to article two of the law, all previous convictions in relation to non-fullfilment of the obligation to perform military or substitute service should be annulled.

Óscar Cervera García was arrested at about 6.30pm in Torla (Huesca), where he was on holidays with his partner and friends. Cervera García was arrested, because an arrest warrant by the Military Tribunal No 13 in Valencia came up, although any warrant and sentence in relation to his desertion should have been annulled by the the law which depenalised violations of the military service law. Óscar Cervera García spent about three hours in the police station of the Guardia Civil in Torla before he was released on bail, with an order to present himself to the judge in Boltana on 6 April 2010.
"This is an administrative mistake or a desaster for the military justice system", commented Bakearen Etxea.

It remains completely unclear why the arrest warrant was still on record, and why Óscar Cervera García was arrested eight years after his release from prison.