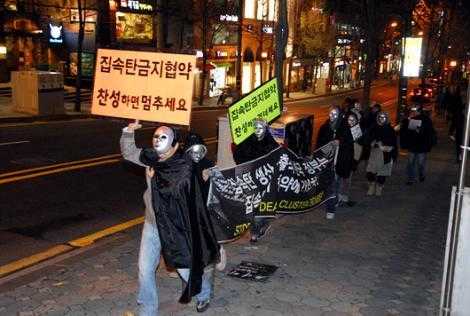 According to the Defense Acquisition Program Administration of South Korea[1], the total turnover of arms exports by South Korea exceeded 1 billion dollars in 2008. The Defense Acquisition Program Administration of Korea plans to raise this figure to 1.5 billion dollars by 2015, expecting to become one of the world's top ten arms exporting countries by 2012. The alleged arguement that South Korea should deter the North from provoking a war works as an excuse for spending huge amounts of money on the arms industry. Weapons produced by Korean companies are sold throughout the world. However, it is not openly reported how arms trade proceeds, who profits from it, how the profits are distributed and where and by whom the exported arms are being used.

Several peace activists started developing an interest in the existence of arms production and trade in Korea. They started a study group called 'Weapon Zero Team' in 2006. This beginning was mainly triggered by some of activists' participation in the WRI international conference in 2006 where they learned about the work of several campaigns against the arms trade. Most of them were belonged to the CO movement in Korea. Based on their continued case studies and seminars, in 2008, they prepared an action against an arms parade held on Armed Forces Day in Korea, while at the same time monitoring the parliamentary inspection of the Ministry of National Defense.

One source of inspiration for the group were campaigns against cluster munitions, little known in Korea at the time in spite of active campaigning abroad. 'Weapon Zero Team' found out that the CCM-Convention on Cluster Munitions was signed by 94 countries in Oslo on 3 December 2008. Because the Korean government has not joined CCM, despite its production and export of cluster munitions, 'Weapon Zero Team' decided to get these facts known to the public in Korea by starting a campaign.

In the evening of 3 December 2009, on the first anniversary of signing the CCM, 'Weapon Zero Team' did an action using traffic lights in the area around Hongik University in Seoul, where many young people go out. Wearing black cloth, masks and a small banner on the back that read “Rain of Death, Cluster Munitions! Stop Cluster Bombs!”, the activists were standing at a pedestrian crossing with traffic lights. Pedestrians waiting for the light to change saw the banner that says “Wait for the traffic light if you agree with CCM” while the red lights is on and when it changed the banner changed to “Cross the street if you agree with CCM”. To explain a bit of Korean context here, Koreans are conditioned to meticulously obey traffic lights, even for pedestrians, which means a mass of people would be waiting for the light to change (I dare say this form of collective conformity in behaviour could also be connected to militarism in Korea in general). This action created an image that the pedestrian crossing was full of people in favour of CCM. The activists also handed out leaflets to people who were waiting and crossing the street. Many people have shown interest and were surprised to realise that Korean companies, such as Hanhwa and Poongsan, are deeply engaged in producing cluster munitions.

Currently, 'Weapon Zero Team' is preparing for the publication of the book Banning cluster munitions:Government Policy and Practice in Korean, with the main purpose of getting publicity on this issue here. Other plans include a series of actions to pressure the Korean government to sign the CCM and direct action against Hanhwa and Poongsan, reported to be involved in the production and export of cluster munitions.