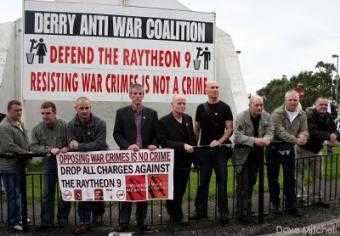 DAWC occupied the offices of Raytheon three times: In 2003, together with FEIC, after 62 people were killed in Baghdad marketplace by a missile that Robert Fisk identified as a Raytheon one. Then in the aftermath of the Qana massacre of 30 July 2006, the DAWC again occupied the plant, this time "decommissioning" the mainframe computer and wrecking over £350,000 worth of equipment. The nine men who were charged with burglary and criminal damage were acquitted of all charges unanimously by the jury in Belfast Crown Court in June 2008.

In January 2009, nine women occupied and tried to again decommission the computer system in the Raytheon plant, hoping to prevent or delay war crimes being committed by the Israeli Defence Forces in Gaza with the use of Raytheon weapons. Their trial is due to start on 8 March (International Women's Day).

Around this time, Derry City Council asked the City Solicitor to write to Raytheon reiterating its strong opposition to any manufacture of military equipment in the city "and putting this in the context of existing Council police opposing rendition flights, the conflict in Palestine and the arms trade generally."

A local newspaper that obtained documents from Invest NI through the Freedom of Information Act has discovered that senior management at Raytheon were perturbed by the activities of DAWC and, in particular, the decision to acquit the nine men in 2008. "Raytheon's US senior management continue to be dismayed and disapointed by this outcome...Unfortunately, it would appear that the view of senior US management is that the legal system in Northern Ireland does not offer the degree of protection to their business that could be expected in other parts of the world."

Raytheon will not be renewing its lease on the premises in Derry when it expires in February 2010, but there are reports that Invest NI are helping Raytheon to find premises elsewhere in Northern Ireland. Activist and campaigners will be paying close attention to developments and will no doubt aim to show Raytheon that there is no hiding place for arms manufactures in this province.