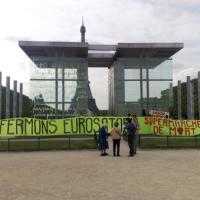 Every other year, Eurosatory is back, and every time, peace activists and activists against the arms trade try to use it to raise awareness about how the French state and French companies don't care about peace when it comes to building, selling, and buying armament systems and components.
On the Tuesday of what they call the "International Land and Air Homeland Defence Week", Eurosatory's organisers are hosting an Official Exhibitor Reception, which was this year at les Invalides – well known building in Paris. This is normally the opportunity for us to show our disgust and our opposition to this trade. Well, normally - as this year - opponents to Eurosatory have been sent half a mile from the spot as if we were so badly hurting their conscience...

Nevertheless, the Boycott Désinvestissement Sanctions campaign has tried to demonstrate near les Invalides, but before long heavy police walked us towards the Mur de la paix where we were "parked". A few activists from Citoyens de la terre were stopped and diverted more than 200 yards away from les Invalides where only a flyer distribution could be done to passers-by in the hope of directing demonstrators to the authorised spot.
These activists of Citoyens de la terrehave spent the whole week "cheering" the arrival of the fat cats as they were coming out of the DLR to the Exhibition centre in Villepinte (north of Paris), dressing up as wounded victims of war amongst their actions. These actions were the most "disturbing" activity the arms traders had to cope with, apart from their own security controls.

Nexter targeted as the biggest exhibitor 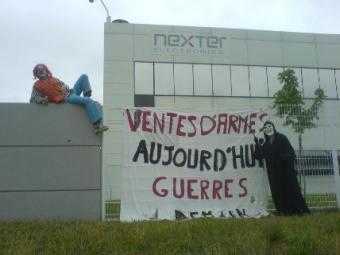 You may know the Belgium campaign Tagwar. Here we have the "Death Awards". The first winners were SNPE, SNECMA and EADS Astrium, for their active contribution to the new French nuclear missile programme. They had all refused to be greeted last March. On Wednesday, 16th June 2010, the Ripper and a dozen activists from the "Non au M51" collective occupied Nexter electronics for a special Eurosatory "Death Award", as the Nexter group (Leclerc tanks, various canons, Caesar vehicles...) has the biggest exhibition space at Eurosatory, 4000 sqm. But the prize is specially dedicated to the General Manager of Nexter Electronics, as this nice fellow jumped successively from EADS (M51 missile program) to Thalès (on the M51 programme and Rafale Marine F1) before being in charge of Sagem's export programme and of the so famous for bribering DCNS Horizon frigate programme.
Of course, this very important manager was busyat Eurosatoy, but the financial director of the company accepted the award on his behalf and under the protection of the chief of security.

So, once again, the week ended with the impression of not having been able to do much, but many ideas have been coming up and all we have to do now is to keep up our energy and build up to be stronger and more creative next time.