From 12 to 13 February 2010, War Resisters' International organised an international seminar titled "Europe for Peace" at the Buddhist Temple in Milton Keynes. The main theme of the seminar was opposition to military bases, and the mapping of military infrastructure.

The seminar began with a talk by feminist antimilitarist researcher Cynthia Cockburn on the need for feminist resistance to military bases. Cynthia stressed the long history of women's resistance, and pointed out three main reasons for women only organising: 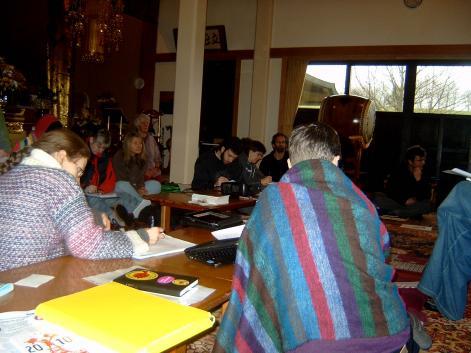 Sian Jones from Aldermaston Women's Peace Camp(aign) followed up with a presentation on AWE Aldermaston.

Hans Lammerant from Vredesactie closed the first day with a presentation on nuclear weapon bases in Europe, including US, UK, and French nuclear weapons.

On the second day of the seminar Tobias Pflüger from DFG-VK talked about the military infrastructure used for the war in Afghanistan. He pointed out that all German troops and supplies for the NATO operation in Afghanistan go via the German military base of Termez in Uzbekistan, which is also used by other NATO partners. All German troops are trained for their tour in Afghanistan at the Battlefield training centre Colbitz-Letzlinger Heide near Magdeburg. Other countries have similar infrastructures that are indispensible for the war in Afghanistan.
Hans Lammerant followed with a presentation on the project to map the deployment of troops to Afghanistan.

The seminar closed with an exchange of resources on how to find out about troop movements and deployments.

The seminar was part of the Grundtvig project Europe for Peace, in which War Resisters' International co-operates with Vredesactie, ofog, Deutsche Friedensgesellschaft-Vereinigte KriegsdienstgegnerInnen, the Transnational Institute, and Associació per la defensa de l'objecció de consciència del país Valencià. Although funded by the European Union, the European Union or the European Commission are not responsible for the content of the seminar, or any publication related to Europe for Peace.