Bill Sutherland, unofficial ambassador between the peoples of Africa and the Americas for over fifty years, died peacefully on the evening of January 2, 2010. He was 91.

A life-long pacifist and liberation advocate, Sutherland became involved in civil rights and anti-war activities as a youthful member of the Student Christian Movement in the 1930s. Sutherland was raised in New Jersey, the son of a prominent dentist and youngest brother to Reiter Sutherland and to Muriel Sutherland Snowden of Boston, who founded Freedom House in 1949 and was awarded a MacArthur Fellowship “genius” grant. He spent four years at Lewisburg Federal Correctional Facility in the 1940s as a conscientious objector to World War Two, striking up what became life-long friendships with fellow C.O.s Ralph DiGia, Bayard Rustin, George Houser, Dave Dellinger, and others. In 1951, in the early days of the Cold War, Sutherland, DiGia, Dellinger, and Quaker pacifist Art Emory constituted the Peacemaker bicycle project, which took the message of nuclear disarmament to both sides of the Iron Curtain.

In 1953, in coordination with the War Resisters International and with several activist groups and independence movement parties on the continent, he moved to what was then known as the Gold Coast. An active supporter of Kwame Nkrumah, he married playwright and Pan African cultural activist Efua Theodora, and became the headmaster of a rural secondary school. The call of Pan Africanist politics was very strong, and Sutherland was instrumental—along with a small group of African Americans living in Ghana at the time, including dentists Robert and Sara Lee–in hosting the visit of Rev. Dr. Martin Luther King, Jr. and Coretta Scott King to the 1957 independence celebrations. In the early days of the first Ghanaian government, Sutherland also served on the organizing team of the All African Peoples Congress. He was appointed private secretary to Finance Minister Komla Gbedema. He was also central to the development of the Sahara Protest Team, which brought together African, European, and U.S. peace leaders to put their bodies in the way of nuclear testing in the Sahara Desert.

Sutherland left Ghana in 1961, working in both Lebanon and Israel for the founding of Peace Brigades International, and for the Israeli labor organization Histadrut. It was also in this period that he began a friendship with Prince Sadruddin Aga Khan of the Ismaili community, working in support of displaced persons as Sadruddin became United Nations High Commissioner for Refugees. He settled in Dar es Salaam, Tanzania in 1963, as a civil servant. Sutherland’s chief work in Dar involved support for the burgeoning independent governments and liberation movements. A close friend and associate of Tanzania’s Julius Nyerere and Zambia’s Kenneth Kaunda, Sutherland helped develop the Pan African Freedom Movement of East and Central Africa (PAFMECA). He served as hospitality officer for the Sixth Pan African Congress—held in Dar in 1974—working with C.L.R. James and other long-time colleagues to bridge the gap between Africans on the continent and in the Diaspora. He hosted countless individuals and delegations from the U.S. in these years, including assisting Malcolm X in what would be his last trip to Tanzania. His home in Dar became a camping ground for liberation leaders in exile from Namibia, Zimbabwe, Mozambique, South Africa and throughout the region. His love of music, especially jazz, his passion for tennis (which he played well into his 80s), and the pleasure he got from dancing, were hallmarks of his interactions, shared with political associates and personal friends the world over.

Despite Sutherland’s close association with those engaged in armed struggle, he maintained his connections with and commitment to revolutionary nonviolence, and joined the international staff of the Quaker-based American Friends Service Committee (AFSC) in 1974. As the AFSC pushed for the Nobel Peace Prize to be awarded to South African anti-apartheid clergyman Bishop Desmond Tutu, Sutherland was working as the AFSC international representative. In 2003, the AFSC initiated an annual Bill Sutherland Institute, training Africa lobbyists and advocates in various policy issues and educational techniques. Sutherland was also the recipient of an honorary doctorate degree from Bates College, and served as a Fellow at Harvard University’s Institute of Politics. He was awarded a special citation from the Gandhi Peace Foundation in India, and, in 2009, received the War Resisters League’s Grace Paley Lifetime Achievement Award. 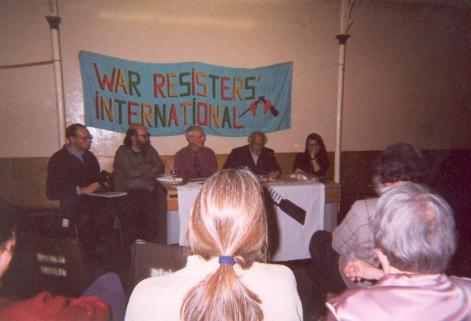 In 2000, Africa World Press published Sutherland’s Guns and Gandhi in Africa: Pan African Insights on Nonviolence, Armed Struggle, and Liberation, co-authored by Matt Meyer. Archbishop Tutu, who wrote the foreword for the book, commented that “Sutherland and Meyer have looked beyond the short-term strategies and tactics which too often divide progressive people . . . They have begun to develop a language which looks at the roots of our humanness.” On the occasion of Sutherland’s 90th birthday last year, Tutu called in a special message, noting that “the people of Africa owe Bill Sutherland a big thank you for his tireless support.”

Bill Sutherland is survived by three children—Esi Sutherland-Addy, Ralph Sutherland, and Amowi Sutherland Phillips—as well as grandchildren in Accra, Ghana; Spokane, Washington; Lewiston, Maine; New Haven, Connecticut; and Brooklyn, New York. In addition to scores of family members, friends, and loved ones, he will be missed by his niece, Gail Snowden, his loving partner Marilyn Meyer, and his “adopted” sons Matt Meyer and John Powell. There will be a private funeral for family members this week, and memorial services will be organized for later this year.