South Korea pays the price for big US bases

US Forces have been stationed in the Republic of Korea (ROK) since 1950. Historicallyh, their main role was to deter any possible war threat posed by the Democratic People's Republic of Korea (DPRK). However, the USA's Global Posture Review changes the role of US Forces in Korea (USFK) from a stationary army on the Korean peninsula into a regional hub for rapid deployment and capable of pre-emptive strikes.

The Land Partnership Plan of 2002, agreed by ROK and the USA, has re-organised forces into fewer but bigger bases and training areas. Bases previous clustered on the Demarcation Line have been closed, but the expansion of bases further south increases the capacity to send highly trained troops to other Asian 'theatres'. Finally, ground combat duties have been transferred to the ROK army, thereby reducing the likely numbers of US casualties. In 2003 the US Second Infantry Division was moved south from Yongsan to Camp Humphreys in Pyeongtaek while under the 2004 Relocation of US Bases Agreement, the ROK government undertook to forcibly evict farmers (which it did in 2005-06).

2. Current Situation of Base Relocation

The 2004 Relocation agreement is five years behind schedule because of local objections and cost overruns. Local authorities object to the US decision to raise raise the land level around the camp - requiring flattening hills and bringing in more than 1 million truckloads of landfill. Meanwhile, expenditure already exceeds the initial US$10 million estimate - therefore the US wants the ROK to raise its 55% contribution.

3. Enlargement of the Training Areas and Ranges and Intensified Usages – Damages Spread

US bases in the northern part of Gyeonggi-do are being vacated but the USFK-only training area and ranges are being expanded - at Rodriguez Complex Range, Dagma North Training Area and Story Range troops train for Iraqi and Afghanistan. Various safety issues have emerged from the constant military training and exercises, and nearby villagers complain of increased noise levels and ground vibration.

Villagers near the now-closed Firing Range in Maehyang-ri demand compensation for the damage suffered. An August 2008 mental health report found a much higher suicide rate than the national average and also higher incidence of psychological disorders. Although neither government has paid any attention to the mental health of civilians residing near training grounds, such consequences are likely to continue long after the firing range or training grounds have been closed.

The joint use of training grounds has required the expansion of the ROK training areas for USFK use - Mugun-ri Training Area (the Twin Bridges Training Area) doubling in size. Since October 1997, this training area has been used by the USFK 13 weeks out of the year (91 days). 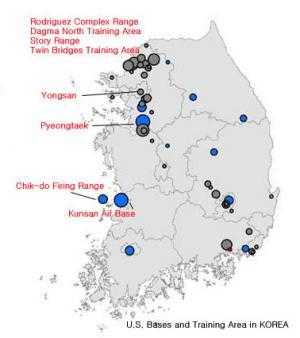 In relocating bases from the DMZ to Pyeongtaek: the USFK are preparing for rapid offensives and strengthening defensive forces against the DPRK, while at the same time targeting China. Pyeongtaek, at the western tip of the Korean peninsula, is close to China. Being near the Osan Air Base and the ROK Navy base and ports, and already connected to the railway and highways, it is ideally located for a military hub, and now has Patriot Missile Units and PAC-3 (Patriot Advanced Capability).

On the west coast, US air bases connect to form a strategic line going south from Seoul - Suwon, Pyeongtaek, Kunsan, and Cheongju with the Chik-do Firing Range at sea facing the Kunsan Air Base.

Noise pollution has increased drastically as the USAF brings squadrons to Kunsan from elsewhere for intensive exercises: in 2007 from Hollomon, New Mexico, and Aviano, Italy; in 2008 from Shaw, South Carolina. The June 2008 'Max Thunder' joint USAF-ROK exercise in June 2008 involved forces based at Kunsan, Okinawa, Guam and Idaho.

It is hard to prove scientifically a causal connection between aircraft noise in the Kunsan area and various human health problems or the sudden death of livestock. However, the evidence is accumulating.

3. The Burden on the ROK of the expenses for Base Relocation

The Status of US Forces Agreement (SOFA) grants land for bases and training areas at no cost. Various taxes and highway tolls are also waived; public utilities charge concessionary rates, while some public facilities are gratis.

Since 1991, the US has received assistance from the ROK for the cost of building military facilities outlined by the Special Measures Agreement (SMA). The SMA is renewed every 2-3 years and each time ROK's share of the burden increases. Unused money under the SMA should be repaid to the ROK. Instead, since 2002, the USFK keeps this surplus in a special fund which has now accumulated US$10,000 million. Under the SMA, the ROK paid US$725.5 million in 2007 and US$741.4 million in 2008 to the USFK, yet the USA continues to demand more.
In essence, the ROK is meeting nearly all the costs incurred in US base relocation through the combined payments under the SMA and the agreed 55% allotment under the Base Relocation Agreement.

In 2007, 23 bases were returned to the ROK under the relocation agreement - but without undergoing thorough decontamination. The US ignores ROK regulations, applying its standards of Known, Imminent and Substantial Endangerment to human health. In some places contamination levels are 100 times above the limit set by Korean law.

The SOFA between the US and the ROK has been an unequal agreement with grave costs to the ROK; however, due to the consistent efforts and campaigns of civic organisations in the ROK, certain aspects of the SOFA have been altered. The amended SOFA now contains a clause regarding environmental damage caused by military usage, requiring the USFK to clean up contamination before handing over bases that are being shut down.