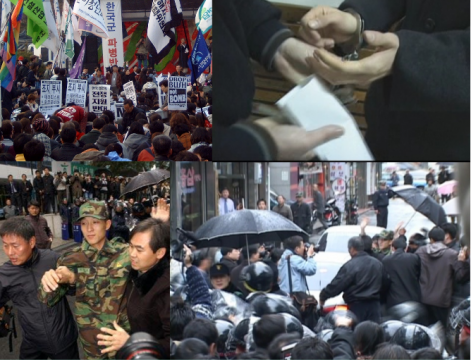 15 May – International Day on Conscientious Objection

Nine years and more than 5,000 objectors later (the vast majority still Jehovah's Witnesses), there is still no right to conscientious objection in South Korea, in spite of some astonishing achievements. In fact, the change of government in December 2007 led to a backlash against the CO movement, and the new government has stepped back from some promises made by the previous government – especially the promise to introduce a right to conscientious objection. For this reason, War Resisters' International decided to focus on the situation in South Korea for the International Day on Conscientious Objection – 15 May 2009.

From human rights to antimilitarism and nonviolence

When the Korean CO movement started, it was dominated by human rights organisations, and the discourse focused on the human rights of conscientious objection, based on religious freedom. While some peace organisations were part of the movement from the beginning, a discourse of peace and antimilitarism was not very visible within the movement in its early days. This is understandable. In the early times, the movement was a reaction to the routine imprisonment of Jehovah's Witnesses, and the silence about this. This was about to change – first slowly, with the declaration of conscientious objection of Oh Taeywang, and then faster, with the Iraq war, the despatch of Korean troops to Iraq, and the CO declaration of Cheol-min Kang in November 2003, a conscript who refused to continue his military service based on his opposition to the war in Iraq.
The movement also embraced nonviolence as a tool of struggle. It learned about nonviolence from a variety of sources, organised workshops, an annual peace camp, and took part in other campaigns, promoting nonviolence.

Despite the fact that the right to conscientious objection has still not been recognised in South Korea, the movement had quite a few legal and political achievements:

And according to several opinion polls a majority of South Koreans today supports the idea of a right to conscientious objection.
For a movement that is only eight years young this list of achievement is very impressive.

The Korean CO movement has in the meantime filed about 500 more complaints with the Human Rights Committee of the United Nations. It can be expected that all 500 will be decided in the same way as the initial two in 2006 – that South Korea is violating human rights by not granting the right to conscientious objection.