There is an inescapable link between the globalisation-induced displacement, dis-employment and dispossession that are results of internal wars and ravage local, traditional and indigenous natural-resource based communities everywhere. There is a linkage between these and the monstrous international wars - whether they are fought in Afghanistan, Iraq, Congo or Somalia. The biggest challenge therefore is to build alliances that are local and global at the same time, and those that not only resist injustice but also present alternatives.

War Resisters' International in cooperation with three Indian organisations is organising an international conference to investigate the links between local nonviolent livelihood struggles and global militarism, including war profiteering. This participatory conference will bring together campaigners from all over the world to analyse the role of states and multinational corporations in depriving local communities of their sources of livelihood, and learning from the experience of nonviolent resistance at various levels - from the community to the global - and at various phases, from preventing displacement to planning for return.

This conference relates two phenomena usually considered separately: community struggles defending the livelihood of local populations, and global militarism and in particular the role of transnational arms producers and war profiteers. This link is of particular interest to War Resisters' International. WRI is a global network existing not only to resist war, but to promote nonviolent action - especially nonviolent action to remove the causes of war or against the misuse of resources in preparing for war. Furthermore, in the spirit of Gandhi and many others who believe in 'thinking globally but acting locally', WRI has emphasised the need to strengthen local community while transcending the boundaries erected by power structures.

There remains space for participants at the conference to propose new workshops. From the opening session introductions to the "newspaper theatre" presentation (to be prepared each day by various participants drawing on Agosto Boal's "Theatre of the Oppressed), an effort will be made to make the conference interactive and participatory.

Morning session: Mining - threat to community, fuel for war
Speaker: From a community struggle against mining in Africa

WRI's Chair, Howard Clark
Local host Anand Mazgaonkar,
Plus a number of reflectors from the participants

As a final participatory activity, Narayan Desai will write an appropriate text connected to the topic of the conference for a Garba (Gujarati folk dance) that is easy to learn and where everybody can join in.

War Resisters' International was founded in 1921, and is based on the WRI declaration:

War is a crime against humanity. I am therefore determined not to support any kind of war, and to strive for the removal of all causes of war

War Resisters' International exists to promote nonviolent action against the causes of war, and to support and connect people around the world who refuse to take part in war or the preparation of war. On this basis, WRI works for a world without war.

WRI has autonomous 40 affiliates in 80 countries. Beyond basic coordination, the work of the international office in London is organised around two programmes: the Right to Refuse to Kill programme, which primarily deals with conscription and conscientious objection, and the Nonviolence programme, which includes the production of resources on nonviolent action, and a regular email bulletin in English and Spanish on war profiteering. This seminar is part of this programme.

Established in the 1950s, Gujarat Sarvodaya Mandal was the central organisation in the Bhoodan (land gift) movement, led by Vinoba Bhave.
Today it is involved in raising awareness on development issues, organising people against unjust and destructive development projects, and the search for alternatives in fields such as agriculture, energy etc.

Founded by Mohandas Gandhi in 1920 to train Indian youth in the nonviolent struggle for India's freedom, today it is one of the few national universities seeking to promote Gandhi's ideals of service-oriented education.

This training centre for nonviolent activists was founded by Narayan Desai in the 1970s during the movement for "total revolution" led by Jayaprakash Narayan (at the time of the Emergency imposed by Indira Gandhi). activists. It has also played a significant role in challenging India's commitment to nuclear energy.

The venue is one of the historic institutions of nonviolent struggle in India - the Gujarat Vidyapith, founded by Mohandas Gandhi in 1920 as Rashtriya Vidyapith (National Institute of University Education) at the beginning of the Non-cooperative Movement.

Students and faculty members participated actively in the freedom struggle, and on three occasions the Vidyapith was forced to stop functioning - the civil disobedience movements of 1930 and 1932 and the Quit India Movement of 1942. It resumed functioning afresh in 1945 and in June 1947, the Mahadev Desai College of Social Work was established. Gandhiji remained chancellor until his death, and his successors have included Sardar Vallabhbhai Patel, Dr. Rajendra Prasad, Morarji Desai and currently Narayan Desai.

Gujarat Vidyapith remains committed to Gandhian values of Truth and Nonviolence and seeks to inculcate a sense of commitment in its students for the reconstruction of the country in accordance with Gandhiji's ideals. It has a government charter as a national universitiy and seeks to promote Gandhiji's ideals of service-oriented education. 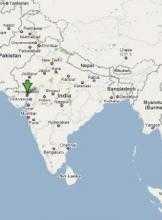