NATO-ZU/Shut down NATO: A successful nonviolent blockade in Strasbourg in the middle of violence

On 4 April 2009, more than 200 activists of NATO-ZU/Shut down NATO (an international nonviolent initiative co-founded by War Resisters' International) managed a successful nonviolent blockade of the northern access road to the Palais de Musique et de Congres, where the NATO summit took place. At the same time, other groups of the coalition Block-NATO (of which NATO-ZU/Shut down NATO is a member) managed successful blockades in the inner city on the main road connecting both orange zones (Av. de la Paix / Av des Vosges - Place de la République) with 500 people and one on the Route du Rhin with 500 people. In total, more than 1000 people took part in nonviolent blockades. All three blockades remained there until about noon, when the spokes councils of the blockades decided to end the blockades, and to join the demonstration.

While the two inner city blockades were initially attacked by police with tear gas, there too the situation calmed down after a while and the police relaxed too.

The nonviolent blockade of Block-NATO and NATO-ZU/Shut down NATO showed that even in such an escalated situation it was possible to protest nonviolently, and to disrupt the NATO summit with this action of civil disobedience. According to a report in the Badener Zeitung, the blockades led to the diversion of the convoy of the heads of state and government, and caused disruption to journalists wanting to cover the summit.

While later in the day violence erupted in the port area of Strasbourg, where the international demonstration was taking place, the careful preparation of the blockades ensured that there was no violence from the side of the activists. 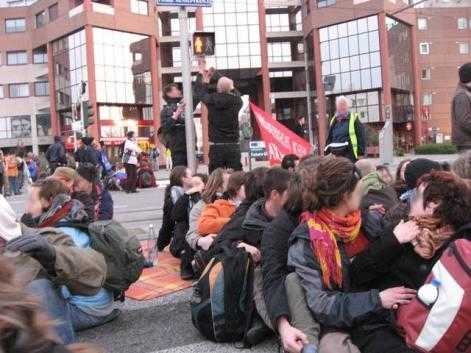 Preparation in the camp

The final preparation for the blockades started in the camp in the rue de la Ganzau, in the south of Strasbourg. The camp was the base for a wide range of activists, from pacifists to the so-called “black block” (not at all a homogeneous grouping), and many people who did not have any clear affiliation. In the camp, Block-NATO and NATO-ZU/Shut down NATO had their own “barrio”, where every day at least three nonviolence training sessions took place, affinity groups were formed, the representatives of affinity groups met in the spokes council, and in general all the planning and preparation for the blockade happened.

On 1 April, representatives of Block-NATO and NATO-ZU/Shut down NATO also met with the police, to explain the planned action of civil disobedience, the nonviolence guidelines, and the role of the police liaison persons as communication channel between the police and the spokes council. While the police listened with interest, they did not commit themselves to nonviolence and insisted on using all “appropriate means” to clear blockades, which did not rule out the use of tear gas. The police also made it clear that it was their job to deter us from our planned action.

Thus, the nonviolence training did not only include working in affinity groups, consensus decision making, blockading techniques and general aspects of nonviolence, but also a discussion on how to deal with tear gas, which for many of the participants was something they had not experienced previously and clearly felt scary for many.

While the participants prepared themselves for the blockade, the situation was heating up several times in the area around the camp. On Thursday evening, after an anti-repression demonstration in the city of Strasbourg during which a lot of damage had been caused, police accompanied groups back to the camp and at the north-eastern entrance to the camp police fired a lot of tear gas at groups of people on the field there. As a consequence, people started to build barricades at the other entrances to the camp.

To intervene here, NATO-ZU/Shut down NATO decided to call a camp plenary to discuss how to deal with the situation. At the same time, we contacted the International Coordination Committee (ICC), which was organising the counter-summit and the demonstration, and asked the ICC to try to intervene with the police, while we would try to de-escalate from inside the camp. This coordinated efforts calmed the situation down in the end, but a planned spokes council of NATO-ZU/Shut down NATO fell victim to these de-escalation efforts, as there was no capacity left for it.

On Friday, the last day before the action, the discussion in the affinity groups and the spokes council shifted towards tactics for the action. We discussed the different possible blockading points in our area, whether affinity groups would feel comfortable with one, two, or three blockading points, and – above all – how to get to our blockading area. At the same time more trainings took place, and new affinity groups joined the action and the spokes council. At a count in the afternoon, we had about 150 people organised within NATO-ZU/Shut down NATO, a number which would grow to more than 200 after the last training session in the afternoon.

While people where busy preparing for the next day, the situation escalated again, this time on the rue de la Ganzau. It seems the reason for this escalation was the detention of a group of clowns for identification purposes. Although all the clowns had been released, people built barricades on rue de la Ganzau, and even set the first barricade on fire. This time, de-escalation attempts of NATO-ZU/Shut down NATO did not help, and it was more thanks to the police, which did not have an interest in an escalation, that the situation calmed down after a while.

During the afternoon and in the evening, most groups of NATO-ZU/Shut down NATO left the camp and stayed the night in different places in the north of Strasbourg.

Early in the morning, at 3am, the other groups of Block-NATO left the camp and tried to reach the publicly announced meeting point at the university, in the south of the city. Without warning they were attacked by police with tear gas, but managed to withdraw and bypass the police, clearly avoiding any confrontation. Other groups went directly to the university, where they were also attacked by police with tear gas when they tried to leave.
The affinity groups of NATO-ZU/Shut down NATO had a different tactic. We did not have a public meeting point, but had decided that each affinity group would make its own way to the blockading point, to arrive there at 7am sharp. The plan worked. We did not encounter any police in the area, and not only reached the blockading point on the Avenue Pierre Mendez France without any problems, we also could establish the blockade without any interference by police. At 7:05am, the message went out that NATO-ZU/Shut down NATO was blockading the northern access road to the NATO summit.

Later in the morning, the other groups of Block-NATO also managed to establish their nonviolent blockades. In total, more than 1,000 people participated in the three blockades of Block-NATO and NATO-ZU/Shut down NATO.

The atmosphere in the blockades was relaxed, and joyful. We did it! After all the discussions of the days before we had not really expected to be able to establish blockades, and even less to be blockading for hours. Everyone was prepared to be cleared away by police using tear gas within minutes, but in the end the blockades decided themselves to end the blockade, and to join the demonstration, thus proving our autonomy about our form of action, and not leaving the decision to the police.

NATO-ZU/Shut down NATO ended its blockade at noon with a small ritual. We then began the long walk to the port area of Strasbourg, where the demonstration was supposed to start, bypassing the security zones. However, when we got closer, we saw black smoke in the sky coming from what we assumed was the Europa bridge over the Rhine, which links Strasbourg on the French side with Kehl in Germany, and over which a feeder demonstration from Germany was supposed to come. When we got to the Pont d'Anvers, leading to the port area, we first made a stop at van of the kitchen collective Rampenplan, which was waiting for us with some food.
While we were eating, police arrived in force and drove onto the Pont d'Anvers, spraying pepper spray from their vans. We quickly withdrew further away, and soon after called for a spokes council to check if all affinity groups were fine.
The police presence prevented us from joining the demonstration (which was not really a demonstration, but ended in chaos), and after a while the affinity groups decided to call it a day.

Later in the evening we again met in the camp. While some of NATO-ZU/Shut down NATO facilitated a camp plenary to discuss what to do in case of a revenge attack by police (there had been rumours to this regard), and attempted to de-escalate the situation, others joined a NATO-ZU/Shut down NATO evaluation plenary. While people were tired after the day, shocked by the violence of the day, and worn out after days of dealing with escalation and de-escalation, the general mood was that NATO-ZU/Shut down NATO and Block-NATO had done a very successful action, much more successful than anyone imagined us to be the night before. However, the satisfaction about our success was mixed with sadness about the general course of events.
Those who still had energy joined the music and the party, while others fell into their sleeping bag completely exhausted.
Luckily, it stayed calm during the night.

On the next day, it was time to say good bye. A last police checkpoint, and we were on our way home.

I was part of the Block NATO action early in the morning, and while we were unsuccessful in establishing our primary blockade, we managed to keep the road clear for several hours to enable those coming from the camp to attend the main demonstration. It was my first involvement in direct action outside of the UK, and the immediate resort to tear gas, shock grenades and rubber bullets (often directly into the crowd, and even at head hieght) by the French riot police was shocking.

The successful Nato-Zu blockade was due in part to the high quality of training and discipline on behalf of those present. They had effective strategies to deal with police action (including a drummer to guide those blinded by tear gas through). In comparison the Block NATO group was perhaps less well prepared, and tear gas attacks broke our lines quite quickly. For many though, myself included, this was our first contact with tear gas and we had to make real efforts not to panic and stay focused.

I was lucky enough to avoid the carnage wrecked by the police on the main demonstration, and many people i spoke with felt genuinely horrified and saddened by the evens of the day. Still, the fluidity and tenacity of groups like Block NATO prove that effective direct action is possible, perhaps unique effective and necessary, in the face of rising police repression against protest throughout Europe.

Many thanks for your evaluation.