Memories of imprisonment, to which I would not like to come back 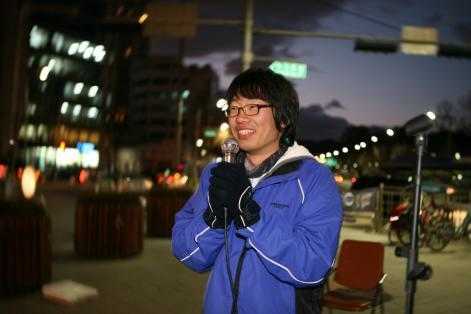 Unlike other conscientious objectors, who are usually arrested around three or four months after their enlistment date, I was not arrested until August 2006, later than I had expected. In those days, it was becoming common for conscientious objectors to be tried without first being detained, and this could have happened in my case except unfortunately the prosecutor challenged the court's decision to let me stay free until I was sentenced, so causing repeated trials in which he demanded my confinement. Nevertheless I was still able to participate in many actions against the expansion of US bases.

As usual with conscientious objectors, I was sentenced to 18 months imprisonment, which I spent in four jails in the end.

Aside from other difficulties in prison, a major problem for all prisoners - not only conscientious objectors - is over-crowding. Usually, one person is allocated around 1.65 square meters of space. While I was detained in Cheongju, following an incident in which two cellmates died after fighting each other, the Ministry of Justice issued an order to all detention centres never to have two people in a cell, but either one or three. As a result, I had to share a cell of 3.3 square metres with two others prisoners, meaning that nobody could lie down straight.

Without question, were I to face call-up again, I would again object to military service. However, at the same time, I don't ever want to be put to prison again. Despite the fact that one might be able to have some meaningful experience in prison, as happens in other communities, there is far more to lose through imprisonment than to gain. For me, it was a process of pain rather than a useful experience in any sense to get to know the limits of my tolerance for others. Without glorifying my experience in prison or exaggerating the adversity, I am sure that I don't want to return to prison for whatever reason, including as a result of my nonviolent direct action or civil disobedience. This is not an excuse for not committing myself, but - although prison may be unavoidable - I genuinely do not want to spend any more of my life there.