The meaning of the military in South Korean context

It would be impossible to introduce the whole history of militarism in South Korea in this short article ― 35 years under the Japanese colonial rule, divided occupation by the United States and the Soviet Union right after the liberation from Japan, division of the Korean peninsula, the Korean War, military dictatorship, "red complex" against communism and the recently heightened possibility of a military conflict with North Korea due to the fatal shooting of a South Korean tourist in Mt. Geumgang Tourism Area and the virtual scrapping of agreements for easing military tensions between the two countries. Although the history of modern South Korea is short, its remnants still linger in many parts of society. It's true that anti-communism is not as strong as it was in the past, since the country's democracy has been in progress and the competition for legitimacy with the North is now virtually over. However, new forms of militarism have been created in the interaction between the present and remnants of the past, and they have entrenched themselves throughout the society.

Closely examing conscription is necessary but not a sufficient way to study militarism in South Korean society. The issues of the military and national defence have a complicated historical and ideological background. Confrontation with the North made people believe that the military and defence are of absolute importance, directly related to survival. Most regimes knew that very well, and made use of the situation to stay in power. The military became an off-limits area, unchecked by the civil society under the pretext of national security. Deaths from unknown causes, illegality and corruption were pervasive, and the conscription system has now become an issue of public outrage since the military is regarded as a place where only poor, powerless people are taken. It is indeed one of the most powerful issues that decide elections.

Although it's not keeping up with the democratic progress in society, the military has steadily improved in terms of human rights. The term of service has been shortened with a plan to reduce it to one and a half years by 2014, and now virtually no one in the privileged elite can avoid enlistment. However, current social discourse on the military shows another aspect of the militarist culture of South Korea. It is now produced to cutting-edge high-tech weapons in order to reduce the number of soldiers, alternative service is being discussed in the perspective of the government's human resource management, not in the perspective of peace and arms reductions. Arguments for equal treatment off all conscripts are arguments against making an exception to conscription.

Moreover, these discussions are often linked to the concept of "independent defence", which argues that US military should be pulled out of South Korea, and the country's army should be reinforced. As a US military pullout or relocation became an issue after the inauguration of president Roh Moo-hyun in 2003, who pledged to be different from past presidents who have always given in to the US, arguments for an increase in the defence budget and reinforcement of the military have gained ground. Now with a more pro-American government, the tendency is yet to be curbed. Although it is far removed from our views of genuine peace, it has considerable appeal to those who yearn for a stronger and powerful Korea.

The way I see South Korea these days, a frenzy of nationalism and patriotism, the basis of "independent defence" is almost sweeping the country. It's not only the Right that have a yearning for a country exercising full sovereignty, free from pressures from the powers of the world. The Left have also used nationalist rhetorics and arguments, which discourage diversity in society and transform an issue of violence against humanity to an issue of national pride, to mobilise as many people as possible. It is well demonstrated in the slogan, "We've got to be stronger in order to protect our innocent daughters." In these circumstances, it is natural that people think of serving in the military as an essential step to become a "real man". It's often seen in the media these days that young male celebrities joining the army are praised to encourage patriotism, and those who evaded enlistment are stigmatised and virtually ousted from society. Now celebrities themselves think that going to the army is no longer harms their career but helps to build a positive image of a real man, who protects women and his family.

South Korea is dominated by a tide of excessive nationalism. The Memorial Day of 6 June 6 is thought to be more important than other holidays. Oaths and salutes to the national flag were made compulsory with the enactment of The National Flag Act in 2007. The scope of the conscription system was extended to include social services, which is still closed to COs, who have had to serve one and a half years in prison. Meanwhile, women, people of mixed race and orphans who had been denied any duty to the state are now allowed to join the military. 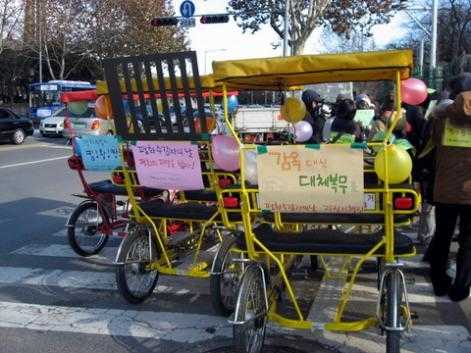 Militarism in South Korea was aggravated by the division of the Korean peninsula and military dictatorship, with the patronage and encouragment of the US government. Now it has entrenched itself in the whole society and our daily lives, which means that we are all part of the structure of militarism as agents and victims of it, in both visible and invisible ways. The CO movement is the first social movement that shed light on this, and resisted state violence with reflections on the meaning of life. Despite the small number of participants, the movement's message has resonated with a considerable number of people, sparking debates and gaining support across the country. After eight years of campaigning, CO movement groups are recognised as a new force in the peace movement of South Korea with the principle of nonviolence. Now we are seeking an extension of the scope of campaign, mainly with a new group called "Good Weapons Project".

Back to the index page of this documentation.