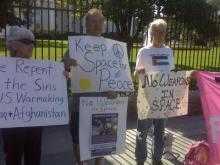 Each fall, in early October, the Global Network Against Weapons & Nuclear Power in Space holds Keep Space for Peace Week. The purpose of the event is to increase global consciousness about the need to prevent the arms race from moving into space.

In 2009, during the period of October 3-10, more than 50 events were held in a dozen countries. Each year a different “space issue” is highlighted as a theme for the week. Posters are produced and distributed worldwide. This year the theme was Unmanned Aerial Vehicles (UAV’s), or drones as they are often called, and how space technology directs their killing mission over Iraq-Afghanistan-Pakistan.

Modern warfare, such as the U.S. occupation of Afghanistan and attacks on Pakistan, uses UAV’s and GPS-guided bombs. Directed by space satellites, and remotely controlled far from the battlefield, these weapons are responsible for massive civilian casualties.

In the 2003 “shock and awe” attack on Iraq, 70% of the weapons used by the Pentagon were directed to their targets by space technology. Our children are being trained through video games today to be the remote killers of tomorrow. Death at a distance is still blood on our hands.
In Brunswick, Maine, USA a well-attended public forum was held during space week and videos were shown about drone technology. The Naval air station in Brunswick will close in 2011 and efforts are underway to turn it into a drone flight test center.

Global Network leaders also did extensive speaking tours in India and South Korea during the week. Many of the events held during space week were protests at key space warfare bases in the US and around the world. Once again many aerospace corporation facilities like Lockheed Martin, Raytheon and Boeing were targeted for non-violent actions.

Many people, including those in the peace movement, do not yet have a good understanding how space technology coordinates all warfare on the planet today – the Space Command calls it “full spectrum dominance.”

We in the Global Network say it’s time to open our eyes and STOP the military’s use of space for war on Earth. It is time to preserve space for peace and to end all war by converting the military industrial complex to sustainable production.