It has been a year since Lee, Myungbak and the new wave of government came to power on February 25th 2008, advocating practicalism. Suffering from the deteriorating economic crisis, people voted for neo-liberal government in the hope of a better living. Lee, Myungbak was the rich and wealth president and people believed he would make them rich as well. Morality and all the other problems were replaced with the strong belief that his government will revive the economy. Backed by the confidence of the people, the regime proclaimed the market fundamentalism with competition and efficiency. In the name of economic development, they are carrying out plutocratic policies and the rest mass of the people are becoming nothing but poorer.

National organizations seemed controllable by civil society at first, but in line with the new president and his government the situation has been changed. All Government ministries are doing nothing but delivering the president’s order. We realized that all the achievement we have made through social consensus and the democratization movement can be easily turned upside down by political power. Throughout the last year, we were woken up to the danger of disregarding this for the procedure and mutual understanding to make the cut.

People started to strive against power. Regardless of the age or gender, everybody paraded through the streets with candles in their hand, discussing and criticizing the limit of democracy all night long. This Candlelight Rally started last spring with the issue of mad-cow-disease, and it has been expanded into wider agendas on education, public weal, irregular workers, The Grand Korean Waterway, etc. New internet media producing alternative information were emerged to cope with the government and the conservative press which emphasize the violence of the resistance force. Despite the gag upon freedom of speech, netizens (internet＋citizen) were smart enough to use the internet as a public sphere to share ideas and come up with a public consensus. Against the political power smothering the public, Korean civil society was mature enough to advocate for ‘non-violence.’

Still the government has no intention to promote mutual understandings within its people. Instead, it is giving its best effort to block the drift of public opinion in advance. Korea is leading the world’s high-speed Internet penetration rate, and it is based on the world’s best internet infrastructure. Internet is now essential in our daily lives as a public gateway where we can share information, have debates and bring out public consensus. Millions and millions of postings are uploaded everyday and it exerted its power with the Candlelight Rally. The time, place and other information were posted on the internet, and people discussed and put the result in action via internet. The internet enabled people to carry everything live through their own videos and pictures, not relying on distorted information of the major media. It made a far-reaching influence.

People were well aware of the fact that 3 major conservative medias (Chosun, Jungang, Dongah) were spreading falsification and prejudicial news stories of the rally. Thereby they called to companies who are publishing their advertisement on the big three newspapers asking for suspension, and posted notes of protest on the newspaper websites. So many people participated in this campaign and they actually succeeded to persuade some companies to halt their advertisement. It caused the cut down in ad-profit for the big 3, and they accused the netizens for interference in a business. Korea Communications Standards Commission found those posting illegal information and ordered to delete them. The prosecutor demanded a real punishment to the netizens and the trial is still in progress. It is an obvious warning that tells us what is going to happen when we are against the government and capital surplus. Now the government is under the process to enforce the control over the internet by operating Real-name –systems on internet and revising the telecommunication law. This sequence of events led up to the sense of self-censorship and chilling effects for people.

Not the police but the prosecution conducts an investigation directly at producers of government-critical programs. They even relieved the president of public broadcasting station at discretion and appointed their adherent to the post. Their next goal is to approve the revision bill to the Broadcasting Law and the Newspaper Law that will enable the plutocracy and few conservative media groups to seize power over the press. 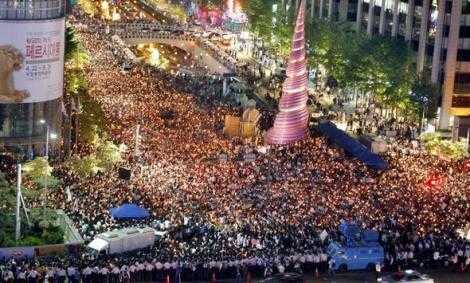 Law on Assembly and Demonstration already restricts the Freedom of Assembly and Demonstration. But to make matters worse, the upcoming revised bill allows no one to mask their identity. Also, noise must be kept to a minimal or an unreasonable amount of volume, and the bill entails a vague description of what can be considered damage (meaning anything can be considered damage, whether its vocal or physical.) All of these simply block any assembly trying to voice their opinion. Punishment regulation also became harsher and assesses an exorbitant fine or detains ralliers in custody. It means the government has more and more control over its people. The Freedom of Expression! has a direct relation to democracy, and this government is leading a retrogression of democracy in this country in the name of social reformation.

Most of people are cut off from the community, while powerful few are gaining more and more of it. The polarization of wealth and poverty is getting worse, and the social safety net is breaking apart in an economic crisis. The oppression on the people who are critical to the government are becoming more deft and balder. And still, we have 30% of the people and conservative media groups who care for nothing but the increase of their own income, supporting this government. As a result, the resistance against injustice is getting harder and requires more preposterous determination.

Back to the index page of this documentation