Conscientious objection in South Korea has a long history. The total amount of time during which Korean COs, mostly Jehovah's witnesses, have spent in prison for the past 50 years far exceeds ten thousand hours. Some people died while suffering from violence and torture during the military regime, and some people had to spend more than 7 years in prison. It was, however, only in early 2001 that conscientious objection became known to the Korean public. After that, it caused controversies in Korean society and became a big issue. At first, COs had to counter numerous criticisms and rebukes, feeling even bigger psychological frustrations than before. [1]

Not too long after conscientious objection became a social issue in South Korea, considerable social changes began to occur. In 2004, Seoul Southern District Court acquitted several COs, thereby forcing administrative institutions to pay attention to the issue. Also, a more active social discussions of the issue helped more people understand it. Due to the District Court's judgment, the Supreme Court and the Constitutional Court had to pass judgment on this matter as well. While both these courts found COs guilty based on the current military laws, the judges mentioned that there needed to be an administrative measure to rescue address the issue.. [2] 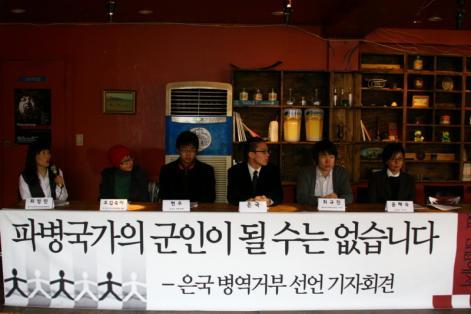 COs with diverse agendas

As the discussion for alternative service for COs continued, new series of COs continuously appeared. It is interesting to note that, while COs from the early 2000's mainly questioned the militarism of Korean society, later COs cited diverse reasons for their objection to the military. Reflections on the unilateral and uniform state institution and on the relationship between sexual minorities and the military began to surface at this period, and COs and activists began to consider different democratic values, such as disobedience to unjust orders, beyond a mere opposition to militarism.
Diverse reflections on conscientious objection has provided opportunities to unite with different groups of people in Korean society. A group called Q&A (Queer & the Army) was formed by a number of CO and non-CO members of World Without War to address issues regarding queer theory and militarism. In addition, the conscientious objection of Lee Gil-jun, a conscripted policeman whose unit was mobilised against candlelight protests [3] opposing U.S. beef imports in 2008, helped many civilians who were previously opposed to or not interested in conscientious objection understand better. Many people were moved by the fact that he decided to refuse unjust orders and had to endure a long time of pain and agony.

A moment of happiness, and back to the starting point.

Following the not-guilty sentence in 2004, the National Human Rights Commission of Korea recommended the Ministry of National Defence to allow substitute services for conscientious objectors in 2005. In 2006, the U.N. Human Rights Committee examined South Korea's periodical report under the International Covenant on Civil and Political Rights (ICCPR), and concluded that the South Korean government should take all necessary measures to recognise the right of conscientious objectors. In September 2007, along with changes in social awareness of the issue, the Korean government announced the plans for substitute services for conscientious objectors. It was the moment when the Korean CO movement finally could see clear achievements.
Unfortunately, the regime changed at the end of 2007, causing the substitute service plan to be revoked along with many other socially progressive plans. In December 2008, the Ministry of National Defence announced that it would no longer consider the substitute service plan for COs, which was scheduled to be implemented in January 2009. One ministry staff said, "while it is important to respect an individual's freedom of belief and protect minority rights, the plan is meaningless if the majority does not agree with it", and explained why they reversed the decision saying "the fact that the substitute service could be used as a means of avoiding the military was considered". [4]

Still, conscientious objection will go on..

The biggest achievement of the ten-year-old CO movement would perhaps be the fact that the public's awareness of conscientious objection has turned much less negative. In addition, the CO movement has challenged the militarism and authoritarianism deeply rooted in Korea well beyond the issue of the substitute service, posing new possibilities to the society. That the national defence ministry reversed its initial decision to implement the substitute service might prove their fear of such changes. Respecting the diversity of people's beliefs can be the biggest obstacle to maintaining the one-sided and violent nature of power. The national defence ministry deems CO's as 'draft dodgers' and does not allow conscientious objection. Despite the goverment's stubbornness, people who live by their beliefs and do not fear going to prison will continue their path.

[3] In 2008, the Korean goverment agreed to relax restrictions on beef imports from the US without hearing the public's opinion. The case sparked candlelight protests which lasted for several months. Throughout the protests, there were moments when civilians realised the reality of state violence, followed by controversies about nonviolence. Some Korean academics consider the protests as opportunities to observe the public's collective intelligence and ability to congregate through the Internet.

[4] The related contents can be found in the following URL: http://www.wri-irg.org/node/6309

Back to index page of the documentation.