15th of May: Documentation on Conscientious Objection in South Korea 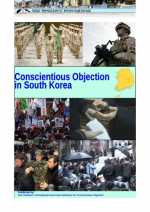 We hope that you will join us in our support for conscientious objectors in South Korea.